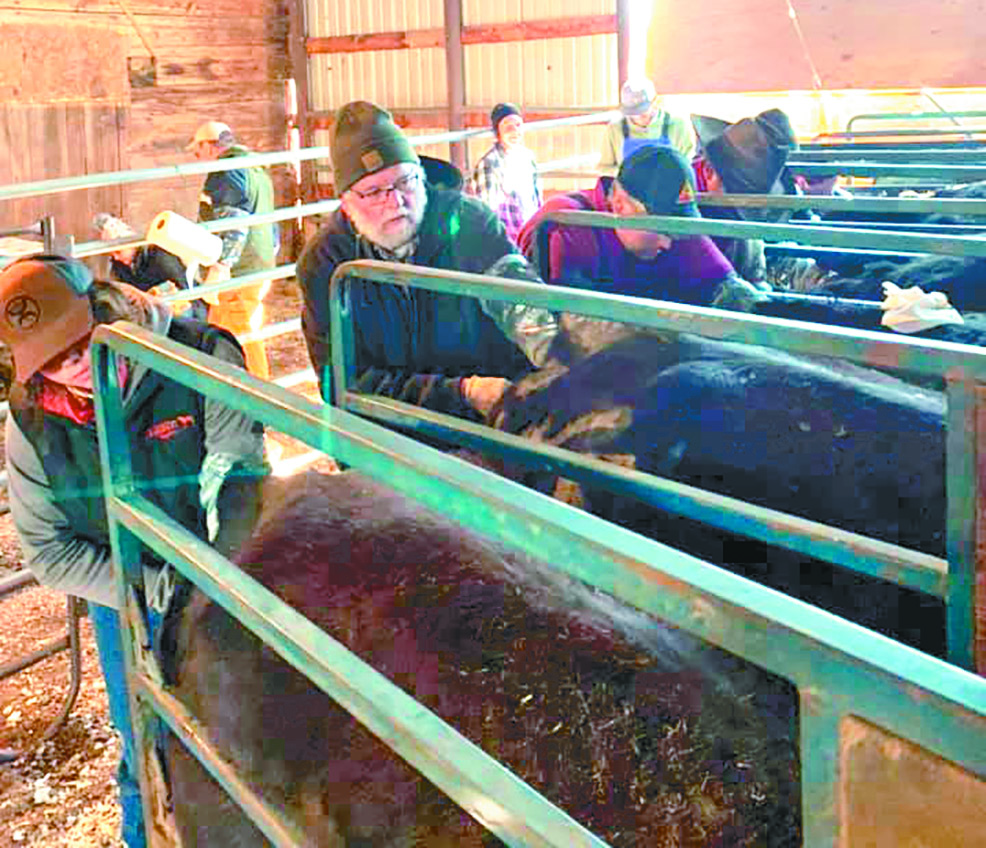 HOT SPRINGS – For three days last week, a dozen area ranchers took part in a hands-on training to learn more about the science of beef production through an AI (Artificial Insemination) Class put on by Dave Koupal of Edgemont.

Artificial Insemination (AI) is a form of Assisted Reproductive Technology (ART) utilized around the world to deposit stored semen directly into a cow or heifer’s uterus. It is a tool that can be used by ranchers themselves for improving reproductive performance and genetic quality of their livestock. This technique is frequently used in the dairy and beef cattle industries as a cost-effective way to more rapidly improve desired characteristics through intensive genetic selection.

Koupal said he has been conducting annual spring AI classes, with a maximum of 12 to 13 people per class, for the past six to seven years with the help of several area ranchers and SDSU Extension Service professionals. Last week’s course began with classroom time at the Mueller Center for one day, followed by hands-on work with both cows and heifers at the Gary Romey ranch east of Hot Springs near Maverick Junction.

Class participants were from throughout the area, including many from Fall River County but also from the Northern Black Hills as well as Wyoming.

“My main reason for taking the class was to learn how to improve herd genetics,” said Natasha Gilbert of Sundance, Wyo., who along with her husband, operate a cattle ranch and also resell beef for others.

During the first day of classroom time at the Mueller Center, participants learned about the bovine reproductive system and also the AI equipment they would be using over the next two days. The basic insemination kit contains a stainless-steel AI gun, straw cutter or scissors, tweezers, lubricant, thermometer, and thaw unit (water bath or wide-mouth thaw thermos). The semen itself, which can be purchased through a company like Genex, who had a representative on-hand last week as well, is stored in “straws” and kept frozen at -300 degrees Fahrenheit in a Liquid Nitrogen Tank.

Because the process of transferring the frozen semen to the thaw bath, into the AI gun and ultimately into the uterus of the cow or heifer relies heavily on precise timing and avoiding exposure to sunlight, students are taught various tricks to ensure the highest possible rate of success.

“Ranching is more than just being a cowboy,” Koupal said last Thursday morning inside Romey’s calving barn, as he smiled and watched his many students put into practice what they had been taught.

For purposes of last week’s training exercise, students were not using actual bull semen but instead a water solution which was frozen, thawed and then put into the AI guns. Once the solution was loaded in the gun, students walked over to an awaiting cow or heifer where they inserted a gloved and lubricated hand into its rectum. They then felt through the cavity wall for the animal’s cervix. Once detected, they held the cervix with their rectally-inserted hand and then took the long and slender loaded AI gun and place inside the animal’s vulva until it reaches the opening of the cervix. Proper placement of the semen in the uterine body is another key to success, and thus is also something emphasized in the class.

In addition to the actual methods of artificial insemination, Koupal stressed that success also relies heavily on other factors including nutritional and environmental.

John Dixson, a rancher from the Newell area who was attending the class, said his brother-in-law had been doing AI for about 50 years and that it was something he had always wanted to learn to do himself as well. Having access to high-quality genetics as a way to improve his herd is what drew him to last week’s AI class.

“I don’t know if I’ll be successful, but I’m certainly wanting to give it a try,” Dixson said. “It doesn’t bother me if it fails, and I know it’s just going to take practice.”

Representing the semen-supplier Genex, Ryan Ollerich of Clear Lake was on-hand during the class, as was Megan Harkless of Oelrichs, who is a local Genex provider.

Ollerich said the company does own some of it’s own bulls, but most often contracts with ranchers throughout the United States to collect semen from their highly-prized bulls. When semen is collected, a single bull produces anywhere from 2 to 4 billion sperm, which is then put into around 100 straws with each straw containing one-half cubic centimeter (.5 cc) of semen, which equals 15 to 40 million sperm per straw.

Ollerich went on to say that nationwide, only about 5 percent of cattle are inseminated through artificial means, with the majority of those being heifers, which is done to help facilitate better first-calving ease, he said. The biggest challenge in doing so is that the process is labor intensive and requires the right facilities. But despite those obstacles, ranchers typically find the process to be highly beneficial as a way to cost-effectively impregnate their herd – at a cost of around $25 per straw compared to the sometimes $5,000 cost of a bull. Another advantage is the access to improved genetics helps to make heavier calves at weaning, and thus worth more at sale.

Despite AI having a lower rate of success – around 70 percent – compared to cows and heifers being serviced by bulls, the cost per conception is often lower. Unsuccessful attempts with AI early in the breeding season however can be rectified later in the season by introducing the cow or heifer into the herd with a bull and still result in a calf the following spring.

“What Dave is doing here is really the future of AI,” Ollerich said, as he and Koupal both described the importance of continued education for today’s rancher in order to compete in the scientific global economy of beef production.