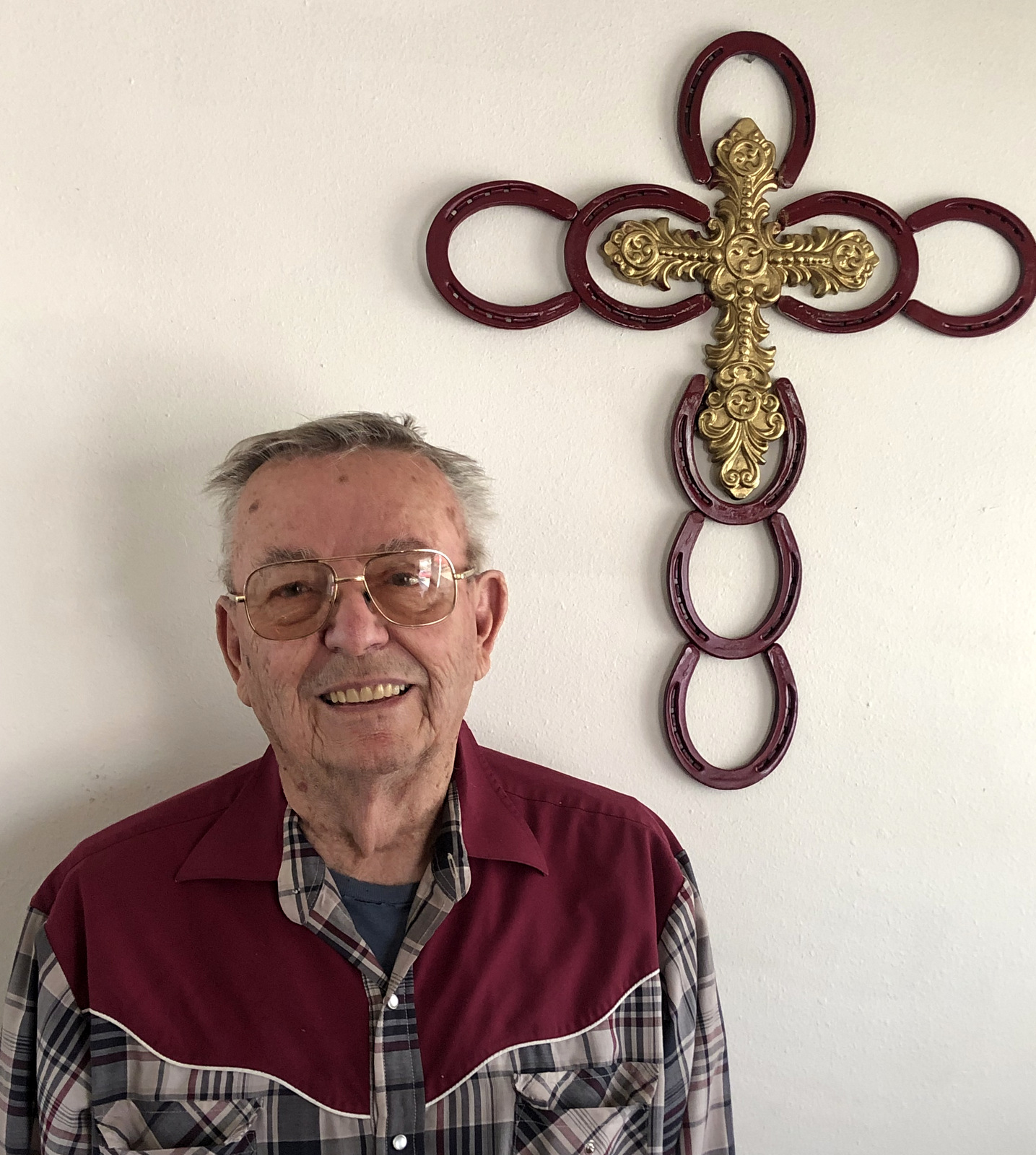 Korean War Veteran Wayne Underwood enjoys making the most of life and creating works of art from horseshoes.

HOT SPRINGS – Wayne Underwood was born in Colorado Springs in the spring of 1933, the youngest of three children and the son of a farmer.

Underwood attended a one room schoolhouse with eight students. “Math was the only subject I liked at all and I never went to high school.”

Yet he has one claim to fame as a youth. At fifteen Underwood helped decorate the corn palace in Mitchell. “I nailed the corn on the world’s largest bird feeder,” he laughed.

At seventeen Underwood moved from the farm to the town of Hot Springs. It was here he landed a job at the Firestone tire shop in downtown Hot Springs, located at the Wesch-Oak building (now scheduled for demolition) working his way up to manager by 19.

“I spent two years working there,” said Underwood. “It makes me real sad to think that building, a part of my childhood, would be torn down.” He added that if the building is torn down he would like one of the building’s blocks for “memories sake”.

Not attending high school did nothing to deter Underwood from making his mark on the social scene. He attended dances and socials as often as he could. It was at one of these dances in 1952 where he first met a woman his heart would refuse to forget; Connie Trent.

“I met her at a dance at the city auditorium,” recalled Underwood. “I was the only kid in town with a new car, a 1952 Studebaker Champion, I was pretty popular. I took her to a few more dances and we dated a couple months, until I found out she was 14, then we didn’t date no more,” he laughed. Yet her memory refused to fade with time.

The following year Underwood married a local girl, but that spring life had other plans for him than matrimonial bliss.

“I received a letter from the Government that read: ‘Your friends and neighbors have selected you for military duty’, saying for me to report to San Francisco July 20th. My heart sunk.”

on July 27th, 1953 with a loss of human life in the millions, an armistice restored approximate boundaries between South Korea and North Korea.

Regardless of the armistice, Underwood found himself aboard a ship in November 1953 bound for the east.

“We only knew we were headed east, we weren’t told where we were going to land.”

“My first recollection of the day I landed was terrible.” It was soon to get worse. “I was only in Korea ten days when I got word from our local VFW that my father had died the day I had landed,” he said. Underwood continued on with work in an emotionally numb fog.

While stationed in Seoul as a mechanic in the motor pool, Underwood saw no action but quickly found himself engaged in missionary work with a local group of missionaries camped just outside the fence of his base.

“On my days off, and whenever I could I would spend time with them. We went to movies together, church together, and drove around town in a 1953 Chevy. People often thought I was an officer traveling with the missionaries because of the nice car and would salute. I really enjoyed my time with the missionaries. I almost stayed in Korea because of them.”

“Working swing shift most of the time I had my days off to do as I pleased,” said Underwood, leading him to mischief.

“There used to be a rock wall all the way around Seoul,” said Underwood, it once stretched along the ridges of Bugaksan, Inwangsan, Naksan and Namsan mountains. “It only had three gates in or out. It was about two feet wide with some places six feet tall and others almost twenty feet tall. I took a few days off and (with some fellow soldiers) walked the top of that wall all the way around Seoul. It took a few days to do that. We only got shot at once,” he laughed. “We were in uniform and they shot at us. Where we were walking was right above President Syngman Rhee’s compound. It was at night and I guess they were asleep and we snuck up on them.”

“I was in the military sixteen months and two days,” said Underwood. “They told me I would make sergeant if I stayed in, I wasn’t about to do that.”

Upon returning home he was welcomed with a wife asking for a divorce and a job that no longer existed.

He worked odd jobs including installing furnaces in crawl spaces in houses for the local hardware store, yet he had a keen desire to start over and learn more about auto body work so traveled to Oregon for advanced auto body training and employment. He stayed with his older sister for a bit while honing his trade. Soon he was able to support himself and was ready to take a shot at marriage again.

“I met a lady on a Wednesday night, we had a date Thursday and Friday, went to church together Sunday and she proposed,” he said. “We were married two weeks later and were married 60 years.”

After his wife passed away, his heart remembered his first love, young Connie of Hot Springs and he set about finding her.

“I got ahold of the Hot Springs High School alumni coordinator who wasn’t home but his wife recalled going to school with Connie’s nephew and knew his contact information. So I called her nephew and asked him to have Connie call me,” said Underwood matter-of-factly.

“When my nephew called and asked, “Do you know a Wayne Underwood”?” said Connie, “I said, “Well, I used to”. And then he told me, “Well, I’ve got a phone number you’re supposed to call”. So I did and I couldn’t believe it,” she exclaimed. After the phone call she agreed to meet him.

Underwood traveled to Nebraska, where Connie was residing at the time, and immediately knew he had made the right decision tracking her down.

“He asked me if I would consider moving to Oregon,” said Connie, “I said “No.” But I was willing to move back to Hot Springs, it was where we met and where he wanted to be; back home.”

Underwood credits his time in the service with teaching him the all illusive virtue of patience, a skill that “has served me well”.

He credits his longevity of life to four things: “I will be 88 in April and I have four reasons for being that old: I’m stubborn, I have an attitude, I don’t take medications and I have a goal to live to be 105.”