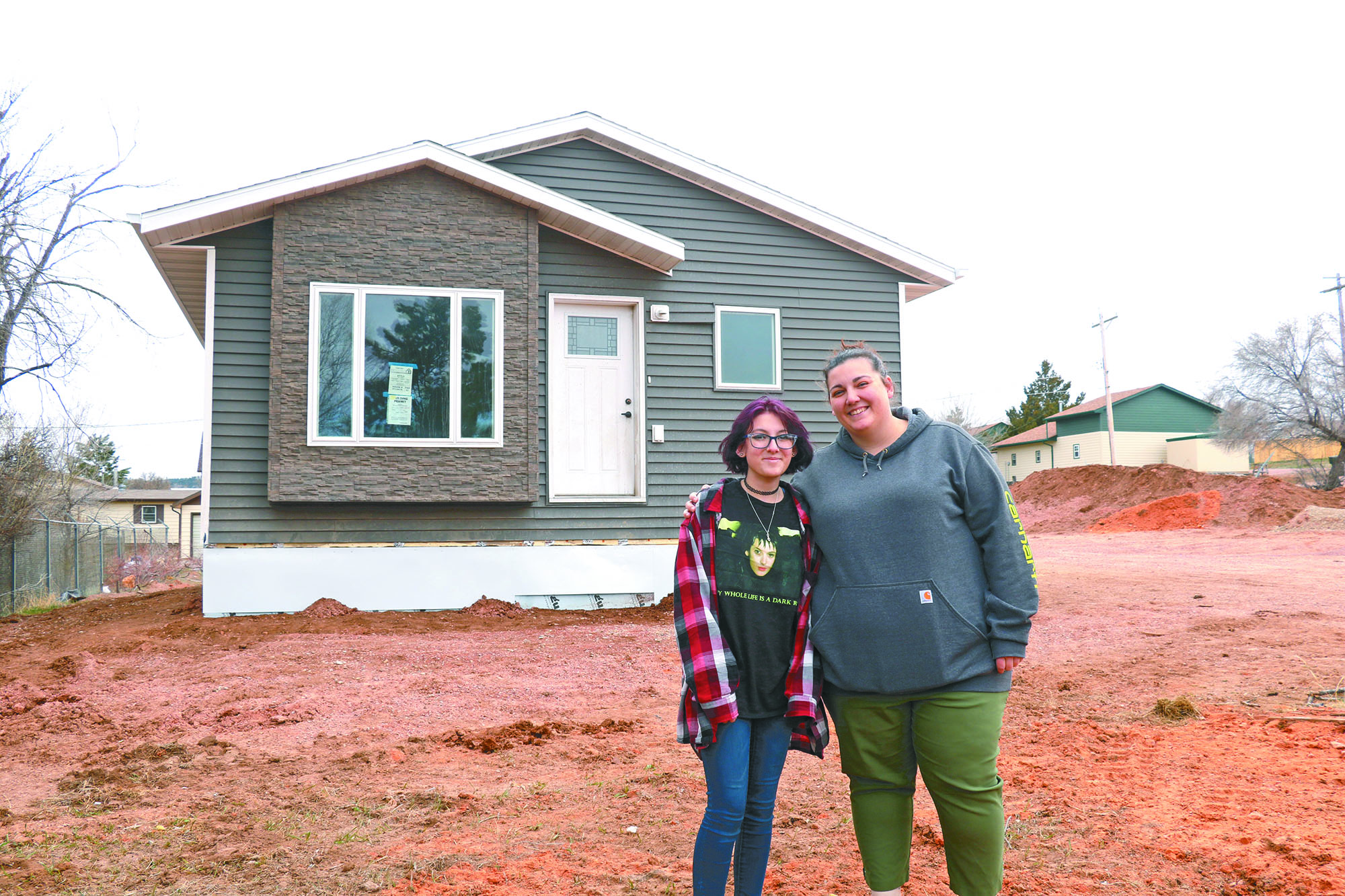 Lacey Piazza, right, poses with her 14-year-old daughter Memphist Young in front of their new home on Washington Avenue, which they hope to move into sometime in July.

HOT SPRINGS – Owning your own home is part of most everyone’s “American Dream.”

For some, the dream becomes a reality much more easily than for others. But thankfully, there is hope out there for anyone who would like to own a home – that is, if you’re willing to put in the work.

For Lacey Piazza of Hot Springs, her hard work over the past two-plus years is finally going to pay off when she and her daughter move into their new Governor’s House on Washington Avenue, later this summer.

Piazza, a 2006 Hot Springs High School graduate, said she began looking into the possibility of owning her own home more than three years ago. Working two jobs at the Hot Springs VA and Hot Springs Dairy Queen and being a single mother made getting started on the process difficult. Add in the fact she had low credit scores at the time, it became nearly impossible – until she heard about Black Hills Area Habitat for Humanity.

“I went to a meeting, filled out an application and found out I was approved about a month later,” Piazza said.

According to their website, Black Hills Area Habitat for Humanity is a nonprofit ecumenical Christian ministry founded in 1990, as part of the global movement of Habitat for Humanity International. Habitat seeks to eliminate poverty housing by constructing simple, decent, affordable houses with families in need who partner with Habitat through sweat equity. Habitat works in partnership with people from all walks of life to build and pay for the materials for the houses. Each home is constructed and funded by the community for the community through thousands of volunteer hours, in-kind contributions of materials and professional services, along with individual and corporate donations.

Piazza’s notification of her approval into the program was just the beginning of a very long, but also very worthwhile process for Lacey, her 14-year-old daughter Memphist, her parents Sharon and John Nash, and many other friends and family.

The application process takes into account a number of factors, including the requirement of one’s household income being below 70 percent of the median for the community, according to Amanda McKillop, a Homeowners Services Associate with Black Hills Area Habitat for Humanity.

In addition, there is also a bottom level threshold that requires the household income to also be at least $26,780 per year. Also, applicants must have and maintain the appropriate debt-to-income ratio needed for making their mortgage payment.

Yes, that’s correct, there is a mortgage payment.

A common misconception with Habitat for Humanity homes is that the person or family receives a free home. That is certainly not the case, according to both Piazza and McKillop.

Through their various partnerships with businesses and individuals – and the “sweat equity” invested by the homeowner themselves – Habitat for Humanity is often able to offer 0 percent financing, discounted material costs, reduced land prices or other opportunities which makes the road towards owning a home more feasible for people in difficult financial situations.

In addition to the income requirements, each potential homeowner is also required to put in a total of 250 hours of the aforementioned “sweat equity,” which includes educational classes as well as on-site labor. McKillop said those hours can also be helped fulfilled by friends and family.

Piazza, who just hit the two-year mark since she began her journey with Habitat and was accepted into program, is nearly finished up with her 250 hours but will most likely easily surpass that requirement before it’s all done. She said she’s learned a lot through the process and is thankful for all of the support she’s received – both in terms of donated “sweat equity” hours and also in the form of letters of support which are also required in order to be accepted.

“I’ve got a huge support system, which I didn’t know I had until I started all of this,” she said, while adding that she was told that she had received the most support letters than any of the other applicants in her class.

The educational classes she’s taken have taught her financial responsibility, coping habits and home maintenance. The on-site work she’s done, not only on her own house but also on other Habitat for Humanity projects elsewhere in the Black Hills, have taught her that she’s more capable than she ever imagined.

“I’ve learned to not give up on myself so easily,” remarked Piazza. “I had always thought, ‘I can’t get on a roof or do flooring,’ but I did. Never in a million years did I see myself doing that.”

The 50 hours of financial and home maintenance classes have also proved to be rewarding and is something she feels everyone should take before becoming a homeowner.

While many of the Habitat homes put up in the Black Hills area are built on-site, Piazza’s particular situation was best suited for a Governor’s House, which was set on a crawl space foundation March 18 near the former water tower at the corner of 23rd and Washington (See story about property on this page). Prior to it being set down shortly after a spring blizzard, Piazza, along with many community volunteers, helped clear out snow that had piled up inside the foundation.

Piazza said there is still plenty of work to be done, which includes doing some siding repairs, finishing the inside with flooring, cabinets and appliances, and adding on a small deck and garage. She however hopes to be moved in by July, which is when a dedication will be planned by Habitat for the community to attend, which will no doubt will include a lot of people who are very proud of all that Lacey has accomplished.

One of those proud people is Joanna Crawford-Clyde, with whom Lacey and Memphist have been living.

“Lacey is very faithful, kind, generous and hardworking,” said Joanna of her friend. “She works two jobs while raising her teenaged daughter. On top of it, she has been putting all her extra time into assisting others with their Habitat houses. Her tenacity and courage is immeasurable and she’s one of the most patient people I know.”

Patience is certainly a virtue when it comes to realizing one’s dream of homeownership through Habitat for Humanity. Piazza said she definitely recommends the process, but only if you’re not in a hurry.

“It’s not a quick fix,” Piazza said, while adding that they are told at the beginning that it can sometimes take three to five years. “But if you can’t go the conventional way, I definitely recommend. You meet a lot of really cool people. Everyone is very supportive.”

Piazza’s home is the first Habitat project ever done in the community of Hot Springs, and according to McKillop, their assistance has the potential of expanding further in the area if there is interest.

For more information about Black Hills Area Habitat for Humanity, look them up online at www.blackhillshabitat.org.