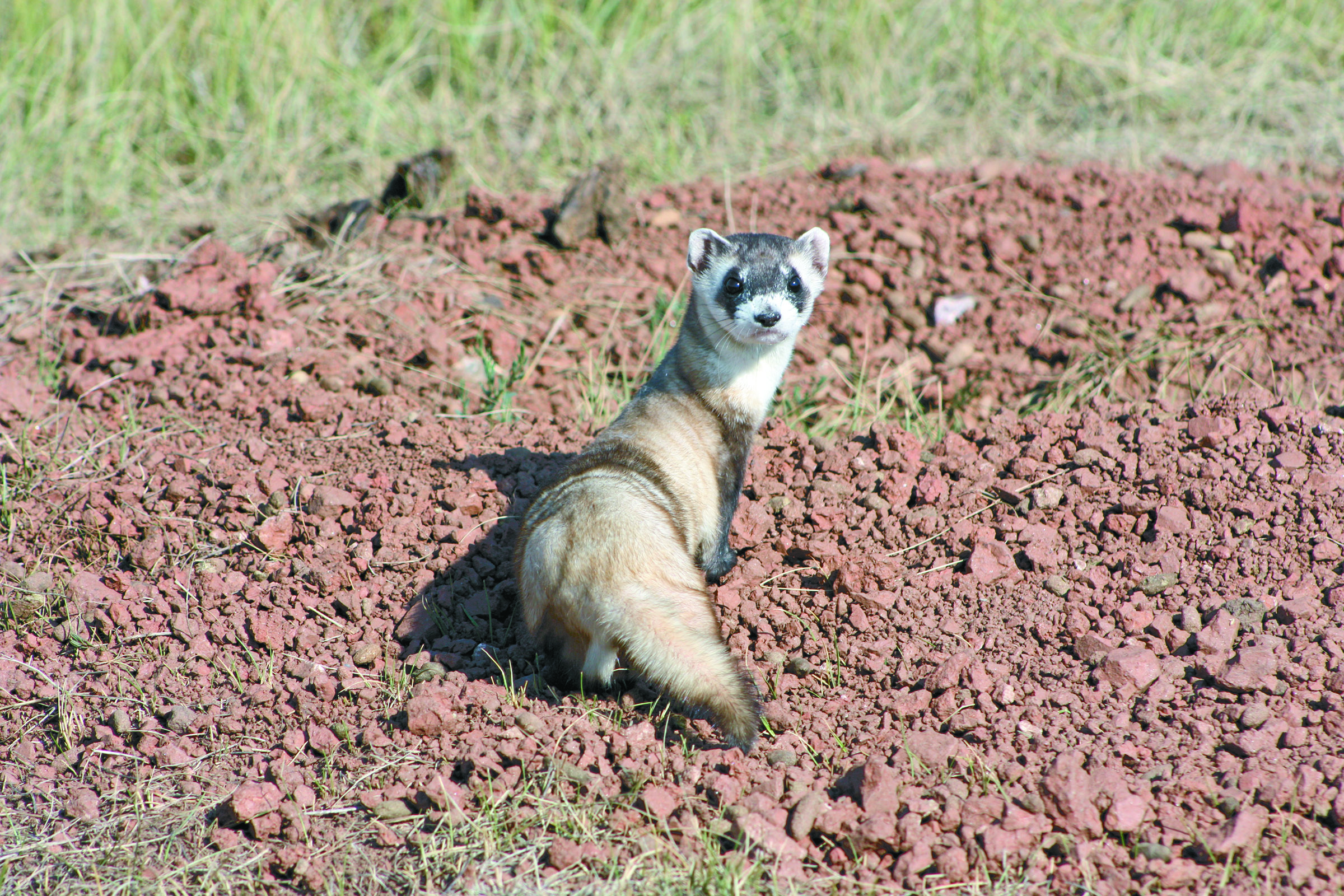 WIND CAVE NATIONAL PARK – Once an abundant species that covered most of the North American prairie, the Black-Footed Ferret, a 24-inch long member of the weasel family, holds a story that is exceptionally unique.

Staring extinction in the face in 1971, with its black eyes, which are surrounded by bandit mask-looking fur, the black-footed ferret tells a story that only a few animals can: a story about second chances.

Once declared extinct in the wild due to habitat loss and sylvatic plague ravaging their communities, the Black-Footed Ferret began its rebound in 1981 in Meteetse, Wyo., when one lone ferret was found (later presumed to be just 18 in total).

Since then, its road to recovery has undergone many twists and turns, including becoming the first native endangered species to be cloned in the United States, in December, 2020.

The number of ferrets in the wild today, according to the World Wildlife Fund, is thought to be only slightly higher at just around 370, and although this number seems small, they are seeing a positive trend in their ongoing recovery.

According to Travis Livieri, executive director and founder of Prairie Wildlife Research, a non-profit that works on research with black-footed ferrets in conjunction with the National Parks Service, the ferrets’ story is a great example of how well rehabilitation of a species can really work.

Livieri has worked with black-footed ferrets since 1995, and because of this, he said, he’s “one of the lucky ones.”

“For four to five months of the year,” Livieri said, “I get to see the ferrets, I get to interact with them; that’s not something a lot of people get to do and it’s incredible.”

Livieri is one of the very few individuals who currently work with these animals, and, according to the National Parks Service, most rangers and visitors to the park don’t ever even get to lay eyes on them as they’re simply that elusive and low in number.

This is due to many factors, Livieri said, with a huge reason being, their susceptibility to the bacterium Yersinia pestis.

Yersinia pestis, better known commonly as plague, is not native to North America, but was inadvertently introduced to the states as early as 1900.

The disease, often called sylvatic plague when it occurs in wildlife, is highly fatal to both black-footed ferrets and prairie dogs (the ferrets’ main food source).

Because of this, the presence, or absence of plague, is also an incredibly important consideration when evaluating potential ferret reintroduction sites.

The history of the relationship between Wind Cave National Park and the ferrets dates back over 100,000 years with historic ranges of ferrets stretching through the Great Plains, reaching from Canada to Mexico, and as early as the beginning of the 1900s, it is likely that the U.S. contained more than 5 million ferrets.

The area around Wind Cave was once a haven for the species.

However, the space the ferrets once relied heavily on for refuge, over time, has declined drastically.

No ferrets had been found in the park, or in Custer County since 1977, when, on July 20, a dictated memo was taken by park employee Jean Donnell from seasonal park naturalist, Randy Williams.

The memo stated, “Randy Williams, a seasonal park naturalist, was driving from park headquarters to Hot Springs, on July 18, 1977 at about 11 p.m., at the south edge of the Bison Flats Prairie Dog Town, when on the right side (west), he sighted a black footed ferret and said it looked into his headlights.”

Williams had reportedly stopped and backed up to try to get a better look, but it was gone.

This ferret, that Williams had reportedly seen, would be the last known ferret observed in the entire state, let alone the park, before the species was declared extirpated (to no longer exist in a certain area) later that year.

Going from roughly 5 million individuals across the Great Plains to just 18 in the wild, the ferrets at Wind Cave were no more, and their story was seemingly over.

With ferret numbers dwindling nationwide to near-extinct lows, and with reintroduction plans running rampant throughout the biological sciences communities of the United States, a survey was undergone, in 1989, that found Wind Cave National Park as a potential reintroduction site for the ferrets pending further data on prairie dog abundance and distribution.

This plan, conducted as a last-chance effort to save the ferrets concluded in a survey that found that plague was not present at Wind Cave National Park and was considered to be essentially absent in western South Dakota as a whole.

This made Wind Cave a plausible place to reintroduce ferrets.

As a result, in 2006, the park officially completed a black-footed ferret reintroduction plan (Wind Cave National Park 2006a) which brought these ferrets back to their native home.

For the first time in decades, the ferrets were back in South Dakota.

Since then, a small but stable population has existed in Custer County at Wind Cave, thanks to the park’s healthy population of prairie dogs and distance from urban influence.

According to Greg Schroeder, Wind Cave National Park’s chief of resource management, there has been about 25-40 ferrets in the park since their reintroduction plan first took place.

Schroeder said Wind Cave, being in the transition zone between the Black Hills and the open, native prairie, provides a unique geographic environment for the ferrets.

Furthermore, he said, an even more important factor to their success at Wind Cave is that there has not been a recorded epidemic of plague yet to hit the population within the park making it a great success story so far in their battle back from extinction.

“I have worked with these animals for 13 years now, I started my job working with them specifically, so I’ve had every emotion in the book when working with them,” Schroeder said. “From seeing your first ferret, to the joy of handling one, to watching kits (young ferrets) grow, it really is inexplicable every time you see one.”

This joy, Schroeder said, is what makes working with these ferrets so rewarding.

Outside of the park, other plans are underway, from other organizations, to help the ferrets as well.

In December, 2020, a cloning project, which began in 2013 by a team made up of researchers from the U.S. Fish and Wildlife Service, ViaGen, Revive & Restore, Pets & Equine, the Association of Zoos and Aquariums, and San Diego Zoo Global, accomplished the first successful cloning of a Black-Footed Ferret named Elizabeth Ann.

The work, which represents the first effort in the United States to clone an endangered species, has been chronicled as a major stepping stone of reintroduction of the species on the U.S. Fish and Wildlife Service website.

The cloning, as futuristic as it may seem, is just another barrier humans are beginning to place in between these ferrets, and their potential extinction.

“The good news is,” Livieri said, “they will not go extinct tomorrow. It’s not gonna be an overnight process, but, I hope within my lifetime, that we will be able to see ferrets regain their place on the prairie.”