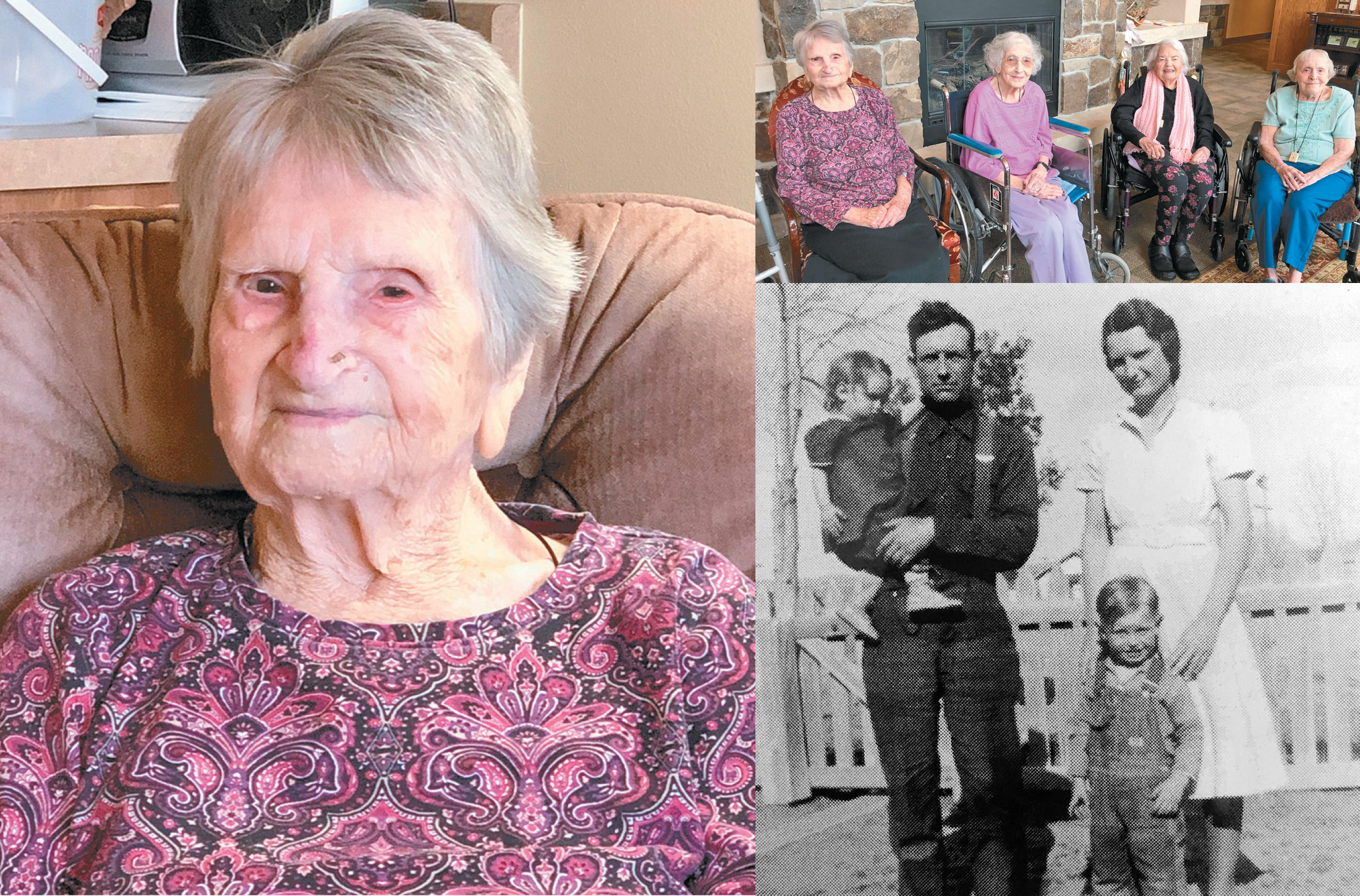 LOWER RIGHT: Caroline and Barney with son John and daughter Mary circa 1939.

“I was born in a one room log cabin, the second of six children,” said Curl. “At first the cabin was about 12 feet by 20 feet with one small bedroom and a living area. But as more children came along dad added on, eventually we had three rooms.”

“Dad was a farmer and mom raised a big garden. Our outside cellar was like going to a small grocery store,” explained Curl, “we had about everything in it. In those days you also had to keep you eggs, butter and milk in there so you could have it at least for a day.”

The children attended the one room school house in Red Canyon.

“It was just me in my grade,” recalled Curl. “It was just a country school, we didn’t have many children. I don’t remember having anyone else in my grade until about 7th grade. But no matter what grade you had to recite in front of the whole school, big kids and little kids. I liked school. I liked arithmetic and spelling and later I liked geography.”

Since Curl and her siblings lived on a farm and their help was needed after school, they didn’t participate in extracurricular activities, but she took full advantage of classes offered including psychology, bookkeeping and public speaking.

“I took those subjects because I had to have the ones I could get credit for and I remember when I took psychology I thought I would never use it but I did and being able to get in front of the school and talk helped when I became a Sunday school teacher, I actually used those things.”

Curl grew up during the depression and the ‘dirty thirties’.

“It was pretty tough going. I mean, how would you like to work for a week for $2.00? What was going on in the world is sure a lot different than now. But my dad had it set up so that our little farm took pretty good care of us, but I remember the days my dad didn’t have two nickels to rub together. But I always felt we lived well because of our garden and farm. Fresh vegetables and beef and then we canned what was left.”

“I look back over it and it was a good life. Nothing detrimental to your health, we were out in the air, not a lot of contaminations, I never got the childhood diseases until I got to high school. In high school I got the measles, mumps and chicken pox,” she exclaimed.

“I didn’t date until after I was out of high school, actually we didn’t do that dating thing. We used to get together as a family and ride in the horse drawn spring wagon to the neighbors and have picnics in the summer and in the winter we would skate on the ice and have skating parties, but we didn’t really date.”

Curl would have liked to have attended college but as a farmer’s daughter that was not an option.

She learned at a very young age to can, bake, garden and sew. She became so achieved in these areas that for many years her sewing was a sought after art as well as her canning and baking.

It was these combined skills that led her to her soon-to-be husband.

“There was a lady in Edgemont that wanted to know if I could help her after her surgery, to do housework and such, well, she ended up being my mother-in-law,” said Curl. “At the end of each week, her son Barney would come home for the weekend to help his mother out where needed and we just kind of got together. It wasn’t planned. I think it was something that just kind of grew on us.”

“The first year we were married my husband had a job at Wind Cave National Park, but I had a new baby sister come along right after I got married so we camped out at wind cave in a little house that they let us live in but the weekends he would go to his parents to help and I would go to mine to help. But that only lasted for a year, because due to the depression still going on there was downsizing at his work and he was let go.”

“He worked at many, many jobs, he  dug ditches, whatever would come up, he was a very good worker, didn’t have trouble finding work, but not much money. I remember one fall he shucked out a field of corn, he’d drive the horse and wagon down the rows and pull the ears off and put them in the wagon. After he was all done the farmer told him he didn’t have any money to pay him, but that he would give him part of his beef after slaughter before winter. We really needed the money, but thankfully my mom still had her garden and I would go help her and was able to take some home for us too. I also began to sew for others. I would make wedding gowns and flower girl dresses and even bake the wedding cakes. Every little bit helped out.”

After 10 years of marriage the couple bought their own little home just north of Edgemont where they lived for almost 60 years.

Married life suited them both as they enjoyed the same things, even with limited funds.

“You didn’t worry about doing things for fun, we would visit neighbors, go out for a picnic, visit our folks. You didn’t just go places just to go places, you had to make your own fun.”

The couple was active in the Assembly Church in Edgemont where Caroline taught Sunday school for more than 50 years. “I taught the youth class for a very long time, yet after many, many years I felt like I was too old to keep up with the youth group. I was idle for maybe a month and then they had me out teaching the adult class,” she giggled.

Curl feels the secret to a long life can be found in the old adage ‘early to bed, early to rise, makes a man healthy, wealthy and wise’.

“We didn’t do a lot of carousing around and doing things we ought not to do because we didn’t have a lot of money, we had clean food, fresh eggs, and chickens you dressed out the day you ate ‘em. Clean living, giving to others and common everyday life.”

Her gem of wisdom for youth today: “You need to always give your body time to rest, you need good food to eat and I think just serving other people; giving to others is very rewarding. We used to go help our neighbor in the country just to help, you just went to help, you didn’t get paid, maybe the next time you needed help they would come help you ,I call it free living.”