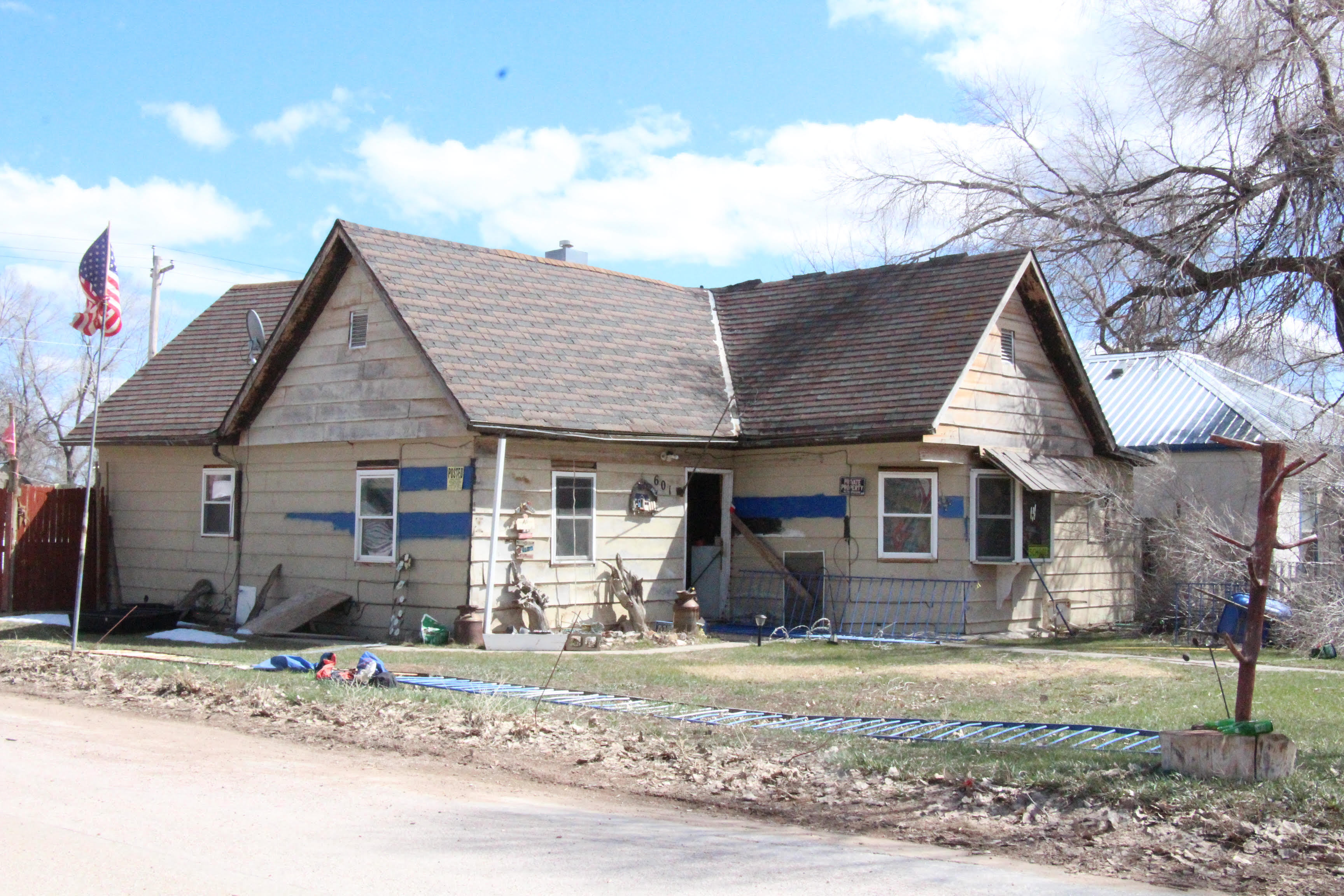 The residence at 601 4th Avenue in Edgemont, owned by Deb Herrington, was declared a public nuisance by Judge Joshua Hendrickson in Fall River Circuit Court on Friday. Hendrickson granted the City of Edgemont the authority to abate the nuisance to include waste and debris removal from the yard on the property.

HOT SPRINGS – On Friday afternoon, April 9, in Fall River Circuit Court, Judge Joshua Hendrickson found that the 601 4th Avenue residence, owned and occupied by Deborha Herrington and her cohabitant Surgee Johnson, constituted a public nuisance and granted abatement for the purpose of cleaning the property to the City of Edgemont.

Herrington appeared via I-TV from the South Dakota State Women’s Prison in Pierre, where she is serving two consecutive two-year prison terms for violating conditions of a probationary sentence. Johnson was present in court for the proceedings.

Edgemont City Attorney Lance Russell called multiple witnesses who work for the City of Edgemont to testify in the case. His first witness was Karen Cain, City Finance Officer for Edgemont, whose attention Russell called to ordinances for collecting delinquent utility bills and to another requiring residents to have water and sewer lines. Cain also confirmed a utility billing for the residence that dates back to June of 2019. A water shut-off order was issued on August 7, 2019, and the city has paid for garbage removal since that time. On August 8, the city council passed a resolution finding the Herrington property in violation of the nuisance ordinance and declared the property a public nuisance.

After Cain’s testimony, Judge Hendrickson asked Herrington if she had any objections to the admission of the documents as evidence, to which she responded that her name had been spelled incorrectly. Johnson was asked the same, and responded that he was always incarcerated.

Russell next called Joe Koller, a public works employee with the city, to give testimony in reference to the condition of the property, which he was charged with documenting and remedying. Koller testified that he removed 18 tons of rubble, yard waste, and animal waste from the back yard using an excavator. Koller confirmed exhibited photos of the condition of the property as those he had taken and said that the current property condition depicted in photos taken in the last two weeks was consistent with that of times in the past. He stated that problems with the property such as odor and attraction of animal pests such as skunks and rodents would increase during summer months with the warmer temperatures.

Teresa Schumacher is a neighbor who lives diagonally across from the Herrington residence and has been a resident of Edgemont for 25 years. Schumacher stated that she did not hold family functions at her residence and had picked up trash that had blown off of Herrington’s yard. She described the smell emanating from the property as ‘like a hot day at the dump’ and complained that the property attracted stray cats. She insisted that that the property impacts neighborhood health because waste did not get cleaned up and that this caused her anxiety and depression. Schumacher said that she was concerned that the conditions of the property would worsen in the coming months and worries that visiting grandchildren could be sickened or injured from debris or nuisance animals. Schumacher’s husband, Scott, said they had experienced mice on their property in the last year and blamed the property condition of the Herrington residence as the reason that a prospective buyer declined to purchase their home when it was up for sale.

Edgemont Mayor Carla Schepler testified to signing the resolution declaring the Herrington residence a public nuisance. The garbage and impact on neighbors’ lives were the reasons she gave for signing the resolution, which passed unanimously. Schepler stated that in terms of an abatement on behalf of the city, she thought that the house needed to ‘come down’ and the property needs to be cleaned up. She added that the city would be willing to pay for the cost of abatement.

Russell next called Deputy Thomas McMillan with the Fall River County Sheriff’s Office who also acts as the Code Enforcement Officer for the City of Edgemont. McMillan confirmed that photos he was shown by Russell were those that McMillan had taken during an inspection that occurred on August 29, 2020. McMillan described the condition of the house at that time as ‘unsafe for living purposes’. He said the photos taken depict trash-filled rooms, exposed electrical wiring, holes in the walls and ceiling and the presence of mold. He testified that 3-5 cats were running in and out of the house and observed mice, a bat, insects and feces inside the residence.

Both Herrington and Johnson objected to McMillan’s testimony, with Judge Hendrickson noting the objection but allowing the admission of evidence from referenced exhibits. Herrington requested the chance to hire an attorney and continue the case at a later date, but that request was denied. Herrington further argued that she was a victim of “double-jeopardy”, which the judge informed her does not apply to civil cases.

Johnson stated that he was requesting more time because he was incarcerated for much of the time since McMillan’s inspection. He claimed that he was in negotiations with contractors to perform repairs but his incarceration prohibited him from finalizing those arrangements. The last witness called in the case was Fall River County Jailer Bradley Hansen who testified that Johnson had been out of jail on numerous occasions in the last six months.

Herrington’s final statement was that the house was under probate and she was not the owner. Russell responded that a deed prepared by Attorney Patrick Ginsbaugh shows that she is the owner of the property.

Johnson’s closing statement amounted to a request to have an attorney present and continue the case. Judge Hendrickson responded by pointing out that Johnson had ample time to acquire legal defense and had not done so.

Judge Hendrickson said, “I find by preponderance of evidence that the property is a public nuisance that poses a danger to the safety of others.” Hendrickson granted abatement for the purpose of cleaning the property but stopped short of granting summary abatement, which would allow for the demolition of the residence.