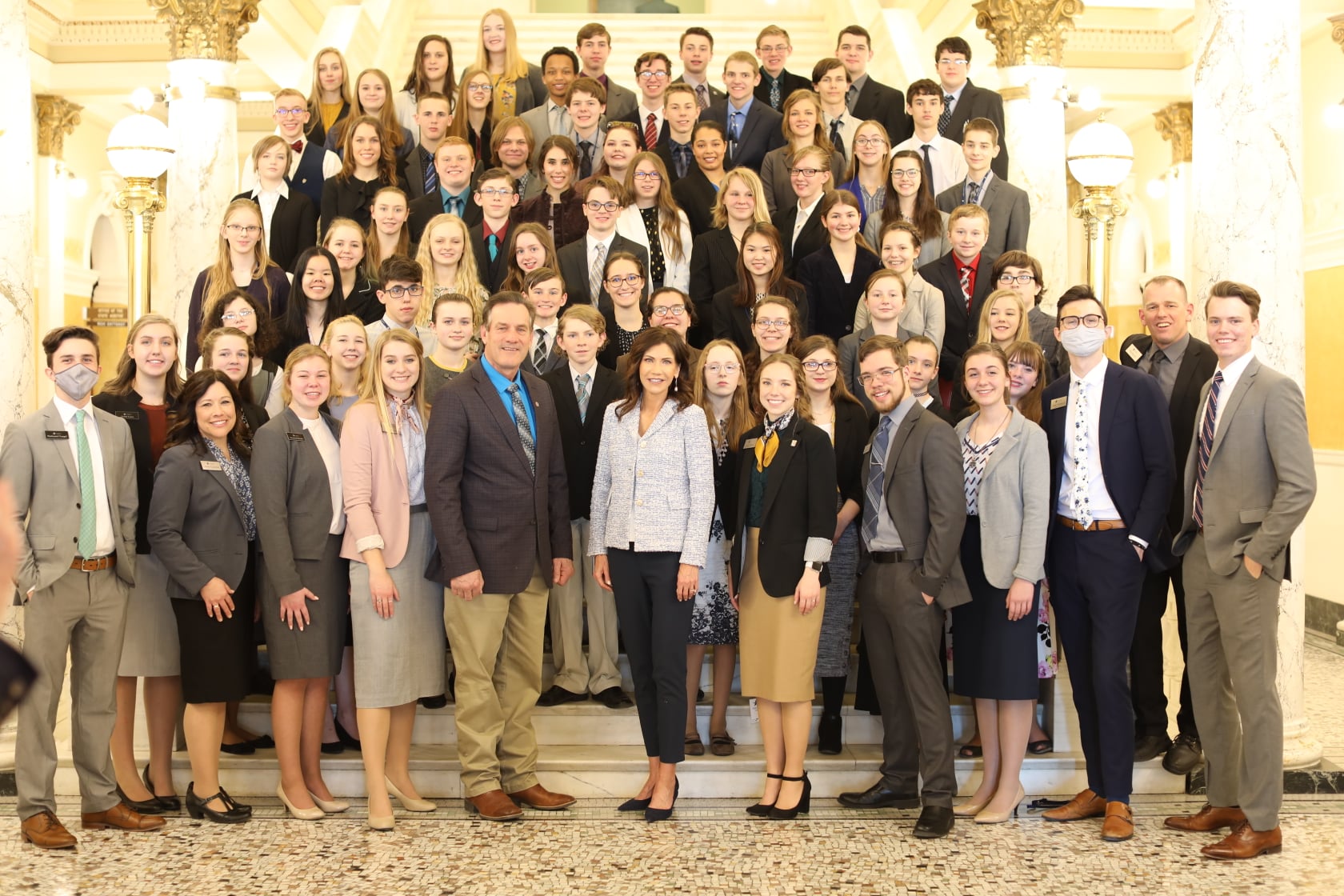 Governor Kristi Noem poses with a large group of homeschool students who were in Pierre participating in TeenPact’s government week. The students, with seven from Fall River County, were present in the House chamber when SB 177 passed.

Local homeschool group in attendance for passage of SB 177

HOT SPRINGS – Senate Bill 177, an act that changes laws pertaining to homeschool students, recently passed both chambers of the South Dakota Legislature. The bill was then signed into law by Governor Kristi Noem on Wednesday, March 10.

The main components of the new law eliminate certain homeschool testing requirements and also aims to provide greater access for homeschool students to participate in extracurricular activities at the public school within the district of their residency.

SB 177 was first introduced on Feb. 3, passed by the Senate on Feb. 17, and was then sent to the House of Representatives.

Seven homeschool students from Fall River County were present in the House chamber when the House voted in favor of the bill on Tuesday, March 2.

The Fall River homeschool group was part of a larger delegation of 65 teens from across South Dakota who participated in “government week” at the Capitol hosted by TeenPact.

TeenPact is a national Christian-focused non-profit organization based in Richmond, Va., that creates hands-on political experiences for students.

According to the organization’s official website, TeenPact’s mission is “to inspire youth in their relationship with Christ and train them to understand the political process, value liberty, defend the Christian faith, and engage the culture at a time in their lives when, typically, they do not care about such things.”

Niles has been homeschooling her three children - Banion, Bethany, and Emma - for six years.

“I first started to homeschool my children while living on a farm near Woonsocket when I realized that I could be teaching them just as well at home. Homeschooling is not easy. It is an investment in time, finances, and patience. It is not for everyone but I have had the opportunity to share the world with my children and have been blessed with getting to know them more than I ever could if they were in public school,” Niles said.

In 2015, Niles and her children spent the entire year traveling across the country due to her husband’s employment in the wind power industry.

“That year, we visited 49 states and the kids had unique learning experiences in each. We toured the nation’s capital, met Senator Ted Cruz in Iowa while he was campaigning for president, and visited as many national parks as we could. My kids did their homework on the beaches of Florida and on benches in Yellowstone National Park,” Niles said.

The Niles children have attended TeenPact in Pierre for the past three years.

“TeenPact is an excellent program. Students who attend the event at the Capitol learn how to write their own bills, political etiquette, and how the political process works in general,” Niles said.

Niles and her children were present in the House chamber when SB 177 passed.

“I was happy that it passed. I supported the bill because it gives homeschool parents more rights and powers that should be in the hands of the parents and not the school district. It also makes laws pertaining to homeschooling uniform across the entire state. My children participate in extracurricular activities within the Hot Springs School District and currently have to take two in-person classes in order to do so. That will now change,” Niles said.

After the bill’s passage, Governor Kristi Noem met with the entire TeenPact group, held a question and answer session, and posed in a group photo with the students.

According to the bill’s language, homeschool students do not have to attend in-person classes at their local public school to participate in extracurricular activities. Previous to the bill, this policy was determined by each individual school district in South Dakota.

This will affect policies at the Hot Springs School District as homeschool students were previously required to attend two in-person classes in order to participate in the school’s extracurricular activities.

Hot Springs School District Superintendent Dennis Fischer was opposed to SB 177 but will continue to positively work with local homeschool students within the district.

“Our Superintendent organization has followed this legislation very closely and were lobbying against it. Having worked in a couple states that have the same legislation as South Dakota does now, I am not sure we will see any change to our district. Our focus is on making the best school possible for students that choose to come to Hot Springs School. Our teachers are extremely skilled and dedicated to our students. The state has many accountability measures we must follow and those always seem to be increasing. It was surprising to see the legislature reverse course on that for homeschoolers. Either way, homeschool students are members of our community, churches, and other organizations and we will work with them to make sure their experience is as good as the ones our regular students receive,” Fischer said.

The bill will have less of an impact at the Edgemont School District in regards to extracurricular activities.

According to Edgemont Superintendent Amy Ferley, homeschool students were already allowed to participate in extracurricular activities without taking in-person classes.

“I would say that overall, this bill probably won’t affect our district, as we currently allow homeschool students to participate in our classes and in our athletic programs,” Ferley said.

District 30 Representative Trish Ladner of Hot Springs, who did not vote in favor of the bill, also met with the Fall River homeschool group in Pierre after the bill’s passage.

“I let them know that I was sorry for not supporting the bill but that I support them and support homeschooling,” Ladner said.

Ladner hoped that the bill could have been rewritten before the House voted on it.

“The bill was poorly written. I would have voted for the bill if it was properly amended. My thought process was that we should pull it, rewrite it, then bring it back and vote on it,” Ladner said.

Ladner’s belief in limited government was at the forefront of her decision to vote against the bill.

Ladner stated: “I believe in limited government. I spent a lot of time talking with school administrators and homeschool parents at length about this bill and came to the conclusion that District 30 was already handling homeschool education well. These policies should have remained under local control. It was working in District 30...why can’t it work statewide?”