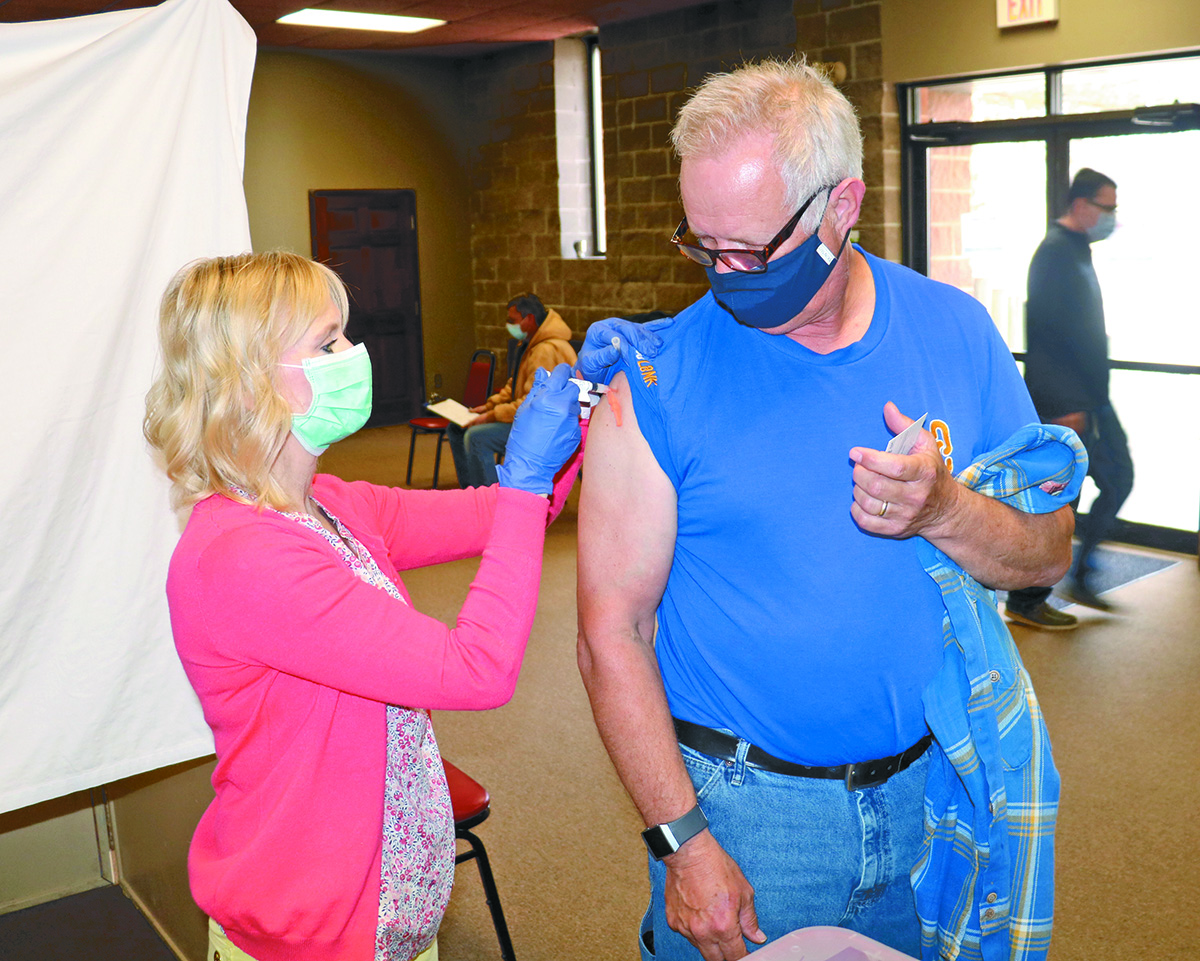 HOT SPRINGS – Since the third week of January 2021, the Mueller Civic Center Annex in Hot Springs has been abuzz every Wednesday as Fall River County residents roll into the facility for their scheduled COVID-19 vaccination shots.

Despite starting with only about 100 shots available each week, that weekly allocation has now nearly quadrupled as there were scheduled to be 360 shots given last Wednesday, March 24. According to Nancy Hussey, an Occupational Health Nurse with Fall River Health Services (FRHS) who helps coordinate the weekly vaccine clinic, there are currently more shots available than there are people who can get them.

As of last week, FRHS had given a total 3,300 doses of the Moderna vaccine, with most of those now going to people who have received the second shot. Currently, Hussey said they are giving more second shots than they are first shots, but that data usually flip-flops each time a new priority group becomes eligible.

As of last week’s vaccine clinic, South Dakota was ranked No. 3 in the country for percentage of people vaccinated for COVID-19, with 18.7 percent of residents who are fully vaccinated. The Hot Springs clinic is open, by appointment only, each Wednesday from 8 a.m. 12 noon for second dose Moderna patients, and then typically from 1 p.m. to 6 p.m. for first dose patients.

Shelly L. Gardner, PharmD,  Rph, said if you registered several weeks ago for your shot and are now eligible to receive the vaccine, please call Fall River 745-8910 option #9 to check on the status of your vaccine.

Gardner also added that the timeline for the Phase 2 rollout, which opens it up to anyone over the age of 16 (or over 18 depending on which vaccine is available), has not yet been announced, but is expected in the coming weeks.

She also said that FRHS is excited to report that they have received a limited supply of Johnson & Johnson/Janssen vaccine.

“If you are eligible to receive the COVID-19 vaccine and are interested in receiving this one-dose option, please call for an appointment at 605-745-8910 option #9,” Gardner said. “This vaccine will be reserved on a first-call first-serve basis. The clinic will be held on April 8, 2021, from 4 p.m to 6 p.m. at the Mueller Center.”

When one arrives at their scheduled vaccination, you should go through the west-facing south doors and enter directly into the Annex. Once inside, you immediately greeted by a FRHS board member of staff member who directs you to Station #1 where you register by signing a form.

The #2 station is where you receive your shot and is where typically two medical staff are working. Last Wednesday, representative from both Fall River Health Services and the Hot Springs Monument Health Clinic were working at that station.

Once you receive your shot, you then move on to Station #3 and receive you immunization card, before heading to Station #4, which is where you are asked to wait at least 15 minutes to be observed for any negative reactions to your shot.

Hussey said she was proud to say that there had not been a single adverse reaction to any of the more than 3,000 shots given thus far. While visiting with some of the people who were receiving their second shots last Wednesday, most of them reported only some slight pain in the arm at the injection site from their first shot.

Hussey also reported the the same process that was set up for the very first vaccine clinic in January has still proven to work now, with only some minor refinements to keep the process running smoothly by adding a greeter along with some additional help with paperwork.

Both Hussey and CEO Tricia Uhlir applauded the fact that the clinics have been an immense community effort, which has included various community groups assisting with occasional snacks and visits, along with having both FRHS and Monument Health staff on hand to help with vaccinations.

Hussey also described how the vaccination clinics have become as much of a social event as they are a medical event, with people often staying much longer than the required 15 minute wait period after their shot, due to visiting with friends and neighbors whom they hadn’t seen in some time.

“For many of them, its one of the first times they have been out,” Hussey said, as she described how everyone who has been coming in has been in a very good mood and appreciative for the opportunity to get their vaccinations conveniently in their home town.

While staff at FRHS is being allocated each week to work at the Mueller Center, some additional changes have been happening back at the main facility as well, as they recently removed the screening station located at the front entrance. All patients/visitors are now screened for symptoms when they enter the building.

Seven Sister’s Living Center is also now open to visitors, but please call to make an appointment first before arriving.