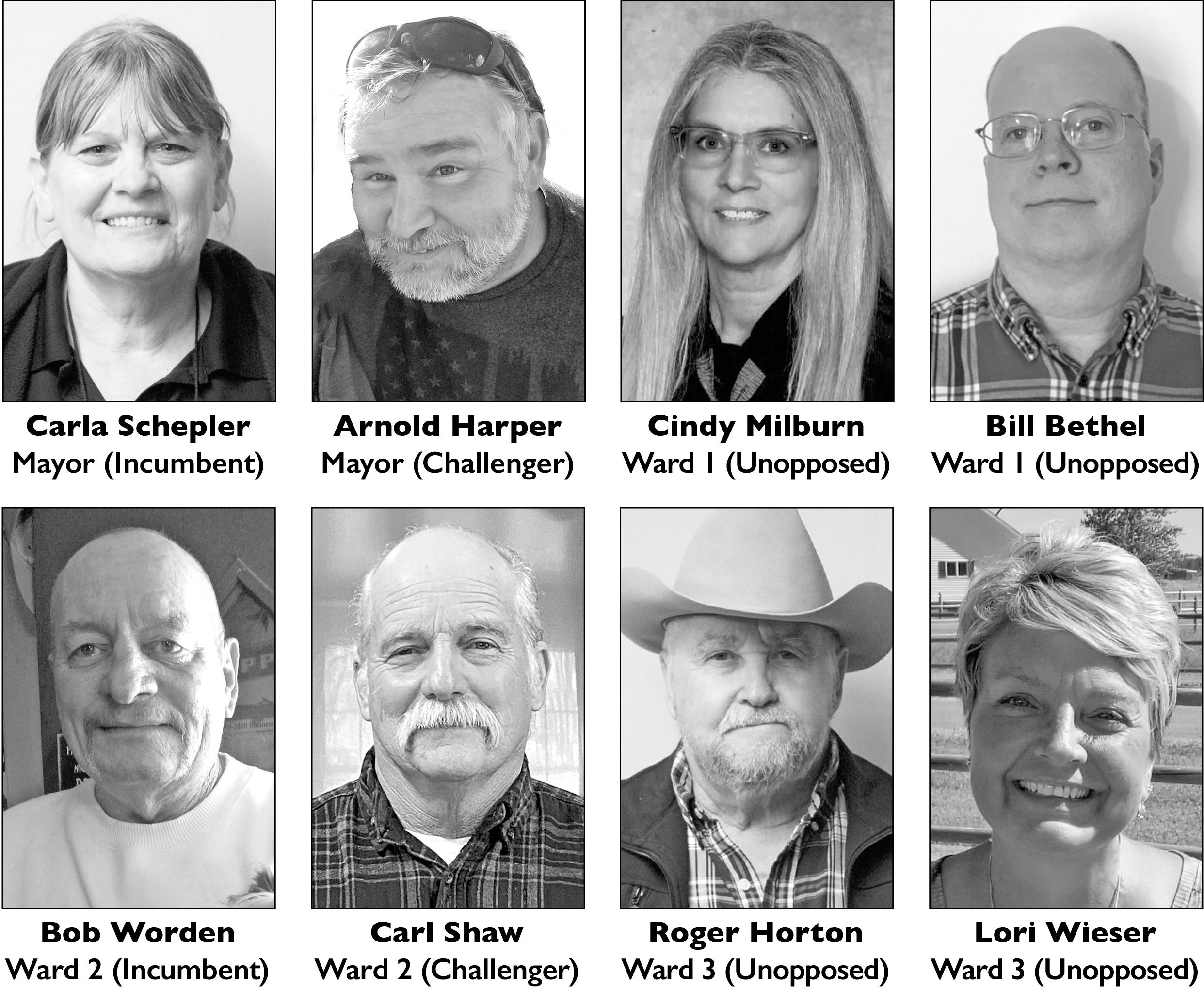 EDGEMONT – In this year’s Edgemont city election on Tuesday, April 13, only the mayoral race and a city council seat in Ward 2 are competitive races, as four city council candidates will be running unopposed for the other vacant seats.

Both candidates for the two vacant city council seats in Ward 1 are unopposed and thus will not be on the April 13 ballot. Those two seats will be filled by Cindy Milburn and Bill Bethel, who are both newcomers to the Edgemont City Council.

Ward 3 sees a similar situation where Roger Horton and Lorie Wieser will earn their seats due to running unopposed. Horton is the incumbent for his seat, while Wieser will be new to the council.

All candidates – whether opposed or running unopposed – were all sent questionnaires as a way to better inform their constituents within the Edgemont city limits.

In addition to telling a little about themselves, they were all asked to specifically answer the following questions:

1) What special skills, talents or experience do you bring to the Edgemont City Council, if elected or re-elected?

2) Choose the top two issues that most concern you regarding the City of Edgemont and its residents, and how you plan to address them, if elected or re-elected.

Following are their submitted responses:

I am from a small town called Fort Ransom, ND, I graduated in 1978 from Lisbon High School, Lisbon, ND. Have 4 children, Bobby 46, Stacy 41, Kelly 39, and Chris 32, all graduates of Edgemont High School. Been married for 33 years to Robert Schepler. I love to hike, swim, hunt, fish, work in the yard and garden, and being with my family. We have 7 grandchildren and 1 handsome great grandson.

1) I have 10 years of experience being on City Council, the last year as Mayor after the untimely passing of Mr. Dibble. I have learned alot the past 10 years of the day to day operations of the city and there is still alot more to learn.

2) My plan is to finish the water project, then want to work on the infrastructure, then the streets. But my biggest plan is to get control of the 6th street dust. So the folk there can go and enjoy their yards and gardens.

I am a High School graduate. I have been married for 8 years to Sara Harper(love of my life). I have a stepson. His name is Benjamin Wilson. He is 15 years old. On my spare time I like to donate time to the community by helping hand food for Feeding South Dakota program. I also love lending a helpful hand to my nieghbors as well as the whole community. I believe I am a very strong willed, determined, and outspoken person.

1) I have spend several years working previously for the City of Edgemont as a Utility Foreman. From cleaning curbs and gutters, to managing and repairing water leaks and sewer issues. I have an excellent working knowledge of issues involving infrastructure of the city. I believe in hands on approach.

2) I think the biggest issues for our city is economics, new businesses and jobs.

My husband Randy and I have lived in Edgemont for 8 1/2 years. Randy is from Hill City and we moved to So. Dakota to be closer to his awesome family. His son, Corey, lives in Casper, WY and my daughter, Andi and grand-daughter Chloe, live in the Denver area. I enjoy being outside working in the yard or in the house baking and canning. We spend alot of time riding motorcycles, fixing up the house, and visiting family and friends.

I’ve had many jobs in my life and learned from them all! I managed a restaurant/lounge for 15 yrs., employing 20 plus employees. I did all the ordering, inventory, deposits, and payroll. Other jobs have been payables for a co-op with ten entities, cable tv services, house mentor and certified drug dispenser for Black Hills Special Services, police and emergency services dispatch, Cheyenne River Animal Hospital, and as a para at Edgemont School.

I have no private agenda or special interest - I do see a need for additional communication between citizens, organizations, and our city council. I hope to better that by encouraging residents to attend meetings, whether they have issues or questions or not. Just come in and listen, learn, and become more informed. I’m not running for this position to simply fill an empty seat, I would truly like to be part of the positive growth in our great community!

My wife Gail and I moved here in August of 2020 from Baltimore Maryland. We both retired about two years ago, and got tired of how things were and found like-minded people here in Edgemont. It is a wonderful and liberating place to live.

I started at a young age working on Carpentry, Cars, Electronics, Computers, Data Communications, and anything technical. I Find that these things are very similar at a basic level and I enjoy it. All my careers have been in some form derived from my hobbies.

I started to get involved here by meeting people and learning about the town. I have learned so much and have gotten to know and meet wonderful people.

Although I do not have any immediate agenda items, I am very good at trouble shooting and problem solving which we can always use more of this on the Council, to research and find the best way of doing things for us within our means. We need people that can help to get things done, and done in a way that is right for our town. I feel very strongly that everyone here needs someone to represent their Ward and I welcome your input as we move forward.

I graduated from High School in Staples, Minnesota, I have five children and my wife has five children, 17 grand-children. I’ve been in Edgemont for 31 years, married to my wife for 30 years.

1) I have served 3 years on city council and I like to help people that need the help and like to treat people fairly.

2) Finishing the water plant is my first priority. The second would be to chip-seal and preserve the decent streets we have in town.

Contact: This email address is being protected from spambots. You need JavaScript enabled to view it., 605-890-3037

I grew up in western Kansas moved to Edgemont in 1974, met my wife ,of 46 years, in Edgemont and raised one son. He currently lives in Minnesota with his wife and 3 children.My community involvement began with my wife along with her girlfriends raising money to rebuild the gazebo in the park, along with fund raisers for new playground equipment and moved various equipment to the present location in the city park. Other community projects have been volunteering to help rebuild the football field at the school, and at the fairgrounds making new improvements, along with being a volunteer fireman.

1) Previously I served as councilman on the city council , and was a former mayor in Edgemont. Due to my various duties, I am acquainted with various departments and people across the state and am able to network with them in order to benefit the city. Not afraid to dig into a problem to get a answer. I have several years of construction, electrical, and plumbing experience as well as being familiar with city infrastructure, budget and overall city procedures.

2) My most concerns for the city would be, continuation of the water project, this would entail assisting finalizing the loan for the filtering system, getting the filters installed, and form a workable plan for replacing the old water mains. My other goals would be to set up a 5 year plan on maintaining, and upgrading the streets along with working on enhancing the community as well as economic development.

Born 8-4-1949 in Martin, SD., Raised on a farm in eastern Bennett County. Attended Country School 1st-8th grade at Harrington. Attended grades 9-12 at Bennett County HS in Martin. Met wife (Shirley) at Black Hills State University and will celebrate 53rd Anniversary on March 23rd. I am a 22nd degree Mason, Shriner and will help any who need assistance

1)  I bring common sense as taught by parents, to city council. I am willing to listen to public views and try to resolve problems.

2) I would like to see more solutions expressed by public rather than hearing of short coming of council members. Lets work together.

My husband Jim and I have been married 21 years, we have 2 wonderful adult children and six beautiful grandchildren. My husband has had a career in the mining industry for the past 47 years and during our marriage we followed his career from South Dakota, Montana, Wyoming, and Nevada. During each of these moves, I have always found something to do. I obtained training and my state EMT-B license and volunteered as an EMT-B in Absaroka, MT; CASA training and certification In Livingston, MT; ; FOCUS member & Domestic Abuse Advocate and Crisis Line operator, Newcastle, WY; Board Member of the Weston County Humane Society, Newcastle, WY. In Nevada, I went to cake school for cake decorating (fun and fattening). I’ve worked at the Deadwood-Lead Area Chamber of Commerce for 7 years, managed a business in Deadwood for 7 years, owned and operated a Cafe in Edgemont, but my most favorite work was owning and operating a Pumpkin Patch. I attended college at BHSU after graduating Lead High School. My favorite hobby is working with gourds.

2) There are many issues in the City that have been in the fore front that I would like to be involved in finding positive resolutions to, however, one of my biggest concerns is the lack of volunteer personnel on the Ambulance Service and I would like to be a big advocate in encouraging more people in volunteering to help continue making Edgemont a great place to live!