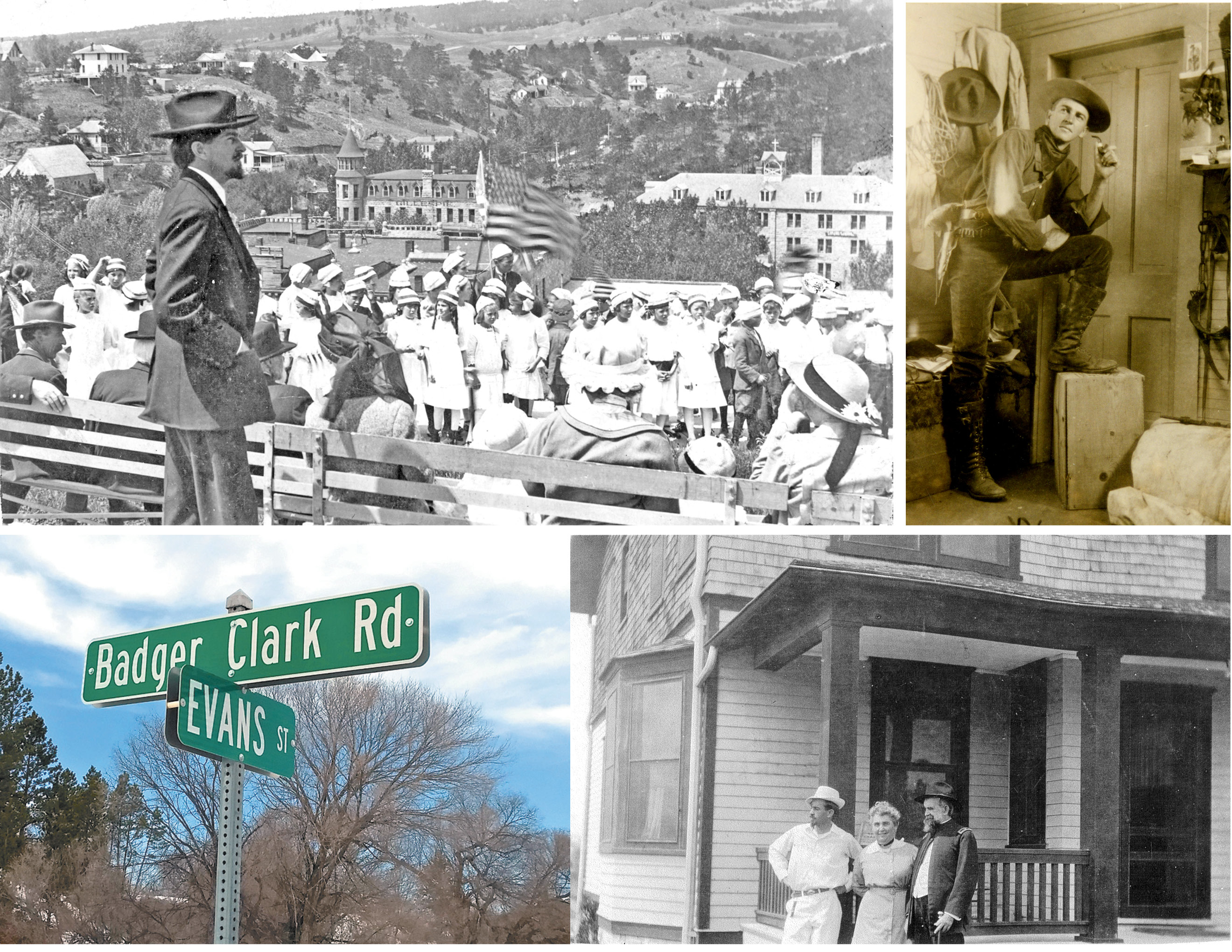 UPPER LEFT PHOTO: Badger Clark gives a speech to a large crowd on Decoration Day (now known as Memorial Day) in 1913. During his life, Badger gave speeches around the state of South Dakota as well as across the United States. It is said that people “traveled many miles to hear him speak, knowing that usually they would get to hear him recite at least a few of his own poems.” (Dakota Wesleyan University Archives)

UPPER RIGHT: After being diagnosed with tuberculosis in 1906, Badger moved from South Dakota to Arizona Territory on recommendation from his doctor. He worked as a cowhand on a ranch near Tombstone until 1910. (South Dakota State Historical Society)

LOWER RIGHT: Badger, Anna, and C.B. Clark stand in front of their home in Hot Springs. C.B. served in the Union army during the American Civil War (where he was twice wounded in battle during the Vicksburg Campaign) and is wearing his old uniform. He was also the first chaplain of the Battle Mountain Sanitarium. (Dakota Wesleyan University Archives)

LOWER LEFT: Badger Clark Road runs from Hwy. 385 to Evans Street on the north side of Hot Springs. (Photo by Marcus Heerdt)

Publisher’s Note: This story about Badger Clark is the next in an ongoing series of stories by the Fall River County Herald-Star to highlight the history of the people behind the names of many of our county’s buildings, landmarks and attractions.

“I remember attending a school function in the old auditorium when a tall, distinguished-looking man wearing brown clothes and high top-boots walked in and was our guest speaker for the event,” Wanda recalled.

When Badger spoke to Wanda and her classmates, he was in the final stages of his life. Badger died two years later, at the age of 74, on Sept. 26, 1957, and is buried in Evergreen Cemetery here in Hot Springs near Wanda’s father-in-law.

Badger Clark Road, which runs from Highway 385 to Evans Street on the north side of Hot Springs, is named after Badger – the uniquely dressed man who possessed a “sonorous baritone voice,” an enthusiastic outlook on life, a strong desire for solitude, and a brilliant writing ability that earned him the reputation as one of America’s finest cowboy poets.

C.B. was a veteran of the American Civil War and a Methodist minister. He and Mary were married after the war in 1865 in Mount Pleasant, Iowa.

Seeking a simpler life, the Clark family moved to Dakota Territory in 1883 and homesteaded near Plankinton when Badger was just three months old.

Badger fondly remembered growing up on the Dakota prairie and wrote in his autobiography for the South Dakota State Historical Society: “With my dog, Shep, I ranged the prairie day after day, barefoot, and then my love of nature must have begun.”

Unfortunately, tuberculosis burdened the Clark family. Badger’s mother Mary and his older brother Frederick both contracted the disease in the 1890s.

After Frederick’s death, C.B., Mary, and Badger moved to the Black Hills in 1898 in hopes that the change to a mountain climate might help with Mary’s tuberculosis.

Mary spent a short time in Hot Springs soaking in the warm mineral waters in hopes that it would cure her of the disease. Sadly, Mary died on Oct. 7, 1898, at age 54.

Badger remembered: “The change proved vain, as mother died some six months after we came to the Hills. With Fred and mother dead, [...] Dad and I were left alone and my boy home faded out forever.”

At this point in his life, Badger and his father were living in Deadwood where C.B. served as pastor at the United Methodist church.

Badger loved living in the Black Hills. He wrote: “...when I came to the Black Hills I stepped straight into the land of my dreams, an enchanted and enchanting country, and that first impression has never wholly left me.”

Badger not only fell in love with the Black Hills but also with one of his high school classmates, Helen Fowler.

Badger and Helen were engaged to be married on at least two occasions, but Badger felt that he would never be able to financially support a family.

C.B. found love again and married Anna Morris in 1901. Anna was a schoolteacher, writer, and poet who would eventually encourage Badger in his writings.

Badger enjoyed living in the Northern Hills and caused occasional mischief. Once during a political convention in Deadwood, Badger and his friends stole a sign that read “Democratic Headquarters” and posted it on the front of a prominent brothel and saloon.

Badger graduated from Deadwood High School in 1902 and attended Dakota Wesleyan University in Mitchell for one year.

However, Badger disliked formal schooling and did not return for another semester. It is possible that “his leaving may also have had to do with smoking cigarettes against college rules or an incident of a goat in the dormitory.”

Seeking an adventure, Badger signed on to a colonization effort in Cuba in 1903. The plan failed, but Badger remained on the island for an additional two years working a variety of labor-intensive jobs.

In 1905, Badger made his way back to South Dakota but not for long. He worked for a short time as a surveyor in the Badlands and as a reporter for the newspaper in Lead.

While working in Lead in 1906, Badger resumed his romance with Helen but began to feel unwell. He visited a doctor and received the diagnosis: tuberculosis. The physician told him: “You’re not very sick yet, but you’ve got a terrible family history. Get out of here within 30 days and go to the Southwest.”

Badger was heartbroken. He remembered: “There it was. I had accumulated a respectable job and a more than respectable girl, and now I must leave everything.”

Helen married another man and moved to Nebraska. Badger remained a bachelor for the rest of his life.

Badger traveled to Arizona Territory and found work as a cowhand on the Cross I Quarter Circle Ranch near Tombstone. Badger enjoyed being a cowboy so much that he forgot all about his illness.

“The only men I knew were cowboys, real old leathery ones, who didn’t know there was such a thing as health, ill or good, so, having nobody to discuss symptoms with, I simply forgot my tuberculosis in six months,” Badger recalled.

While working on the ranch, Badger “got the urge to express his feelings about this new world of his in verse.”

He sent one of his poems, “In Arizony,” to his stepmother Anna back in South Dakota. Anna enjoyed it so much that she sent the poem to Pacific Monthly magazine where it was published under the title “Ridin’.”

Badger decided that “if people would pay for poetry, he had a job for life, one to his liking with no boss and no hours.”

Anna encouraged Badger to write “a poem reflecting the cowboy’s religion.” He obliged, and “A Cowboy’s Prayer,” first published in 1906, became Badger’s most popular poem.

Badger wrote 62 poems during his four years on the ranch, many of which were printed in various publications across the United States.

During Badger’s absence, C.B. and Anna relocated to Hot Springs where C.B. served as the first chaplain of the Battle Mountain Sanitarium.

In 1910, Badger moved to Hot Springs and cared for his aging father and stepmother for the next 14 years.

It was in Hot Springs where Badger officially started to use his middle name, Badger, instead of his first name, Charles. He did this not only to avoid confusion with his father but also because he thought that “if a person wanted to be remembered, he should have an unusual first name” (Badger was his great-grandmother’s maiden name).

In 1915, Badger published his first collection of cowboy poems, “Sun and Saddle Leather,” with financial help from his stepmother.

“To my surprise [I] was able to pay her back, through my royalties, within a year,” Badger recalled.

On June 10, 1921, Badger’s father died in Hot Springs and Badger remained in town for a couple more years to care for Anna.

In 1924, Anna decided to move into the State Soldiers’ Home, effectively freeing Badger from all responsibilities.

Badger then moved into a small cabin in Custer State Park but still remained an active citizen of Hot Springs.

President Calvin Coolidge visited Hot Springs in 1927 and specifically asked to meet the author of “A Cowboy’s Prayer.” The city’s welcoming committee apparently forgot to invite Badger to the festivities but quickly located him.

The Hot Springs Star reported: “Mr. Coolidge spent a good part of the afternoon chatting with Badger - or should I say listening. The President from New England was supposedly quite taciturn.”

Badger continued to visit Hot Springs regularly and was a member of the Kiwanis Club, served on the library board, sang at funerals, spoke at high school graduations, and participated in town festivals and events.

Anna died in 1937 and with money from his family’s estate, Badger completed work on a new cabin in Custer State Park, known as “The Badger Hole.” Badger lived the remainder of his life in the park and spent his time writing, reading, and visiting with friends on the cabin’s large front porch. Badger was deeply satisfied with his solitary life in the woods with “no fixed hours and no responsibilities.”

Badger quipped to the governor that “the poet laureate’s department was one that would not ask for an administration building or any tax support.”

Badger spent much of his time traveling around the country speaking at churches, colleges, schools, clubs, and other gatherings. He had “a commanding presence with a Van Dyke mustache and beard” and recited his poems “wearing knee-high boots, riding breeches, and a military-style coat.”

In the fall of 1957, Badger’s relative, Edwin Clark, took Badger to the hospital in Rapid City because he was feeling ill.

There, the doctor diagnosed Badger with throat and lung cancer. Knowing that his life would end soon, Badger told Edwin that he wanted to be buried in Hot Springs “because he had always considered Hot Springs his home.”

Hermosa-based author Linda M. Hasselstrom owns the copyright to Badger’s book “When Hot Springs Was a Pup.” Hasselstrom and local historian Peggy Sanders are currently working on a new edition of the book for publication.

First published by the Hot Springs Kiwanis Club in 1927, the book recounts the early history of the city in Badger’s own unique, imaginative writing style.

Included at the end of the book is one of Badger’s poems about Hot Springs entitled “Hometown.” The last three lines read: “Oh, never Nome, Hongkong or Rome, Could show me finer sights than home!”

Thank you to Laurie Langland, Matthew T. Reitzel, Wanda Aaberg, Mike Runge, and Peggy Sanders for their contribution to this story. Information and photos for this article obtained from: the books “Fall River County Pioneer Histories,’’ “Badger Clark, Cowboy Poet with Universal Appeal,” “The Badger Clark Story,” “When Hot Springs Was A Pup,” newspaper and magazine archives, and the Helen Magee Collection.