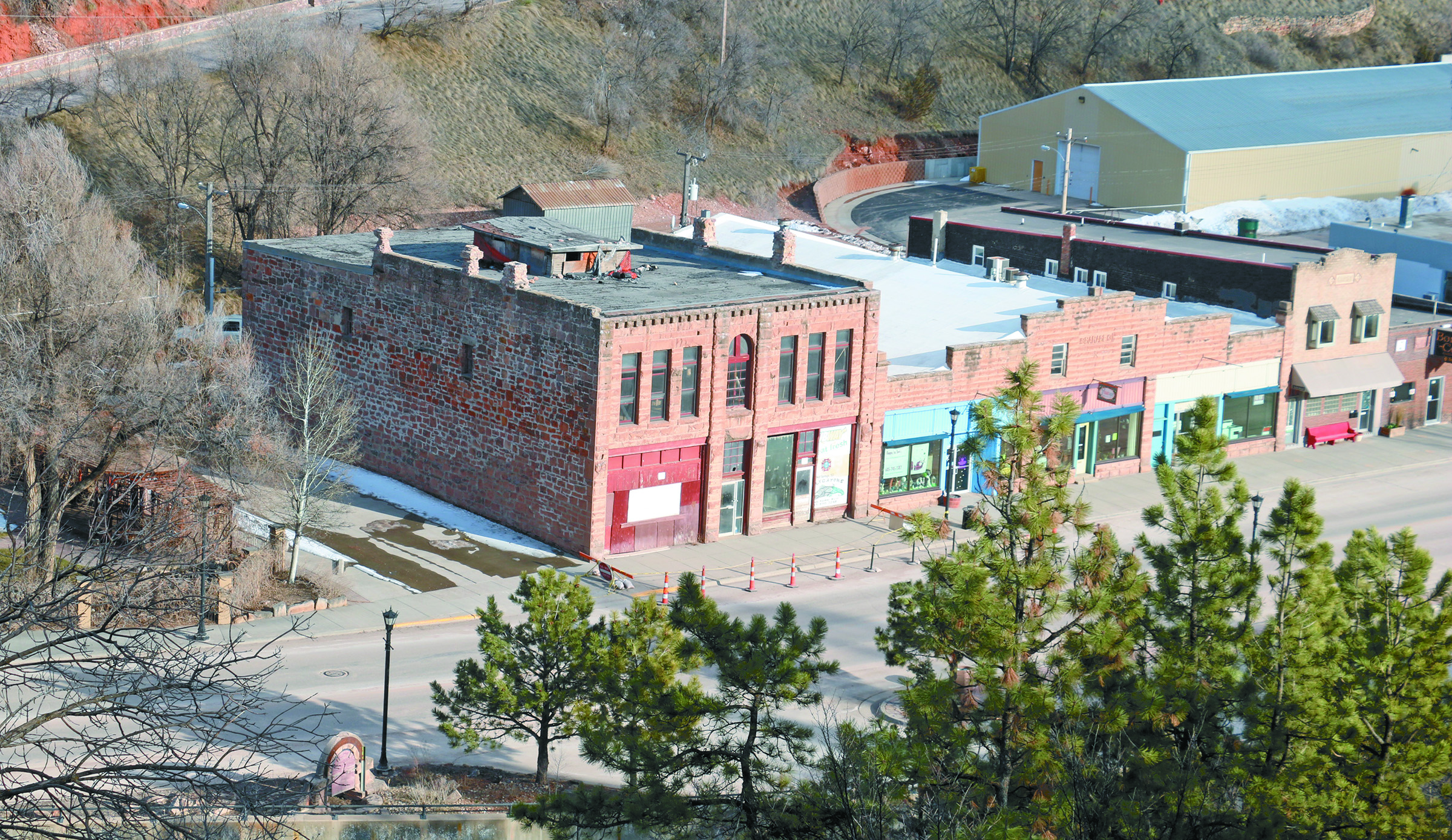 Not wanting to risk a potential delay to the planned Hwy. 385 reconstruction project through downtown Hot Springs, the city council last week approved the lowest responsible bid to demolish the 128-year-old Wesch-Oak building, pictured on left.

HOT SPRINGS – Giving priority to the planned Hwy. 385 reconstruction project through town, the Hot Springs City Council voted 7 to 1 and accepted the lowest responsible bid for the demolition of the Wesch-Oak building at its March 16 meeting.

“This hasn’t been an easy discussion for the council,” stated Mayor Bob Nelson after the vote. “We have kicked this around in a number of executive sessions and they all truly do understand the passion behind this building – both saving it and tearing it down – and I want to commend them. After close to 20 years, it could be argued whether it was the right decision or not but the council stepped up and made a decision. And you should be commended and I want to personally thank you for taking a risk and doing that.”

Located at 717 N. River, the 128 year-old building’s demolition will cost the City of Hot Springs $175,000, which ultimately became the lowest of the three bids after Heinert’s Landscaping recently withdrew their original bid of $74,000. In a letter sent to the City of Hot Springs a couple weeks after the bid opening, Heinert’s stated that, in hindsight, they “would not be qualified and capable to provide the services required in the RFP.”

Prior to deciding to spend the money on demolishing the Wesch-Oak – and thus ensuring its fate prior to the July 1 deadline set by the South Dakota DOT to either have the building’s foundation secured or the building removed – the council did listen to a plea from Hot Springs native Ron Eastep on his plans to buy the Wesch-Oak and save it. The July 1 date was set by the DOT as a deadline to ensure everything was in order for them to let the construction bids by September in order to stay on schedule for a January 2022 start date with the project.

During Public Particpation, Eastep came before the council and said, “I have come to the conclusion that this building can be saved. The solutions to the building problems are not unordinary or complicated.”

He then went on to say that his plan would include purchasing the building from the owner Robert Johnson with Citizens for Progress, getting $2 million in liability insurance, paying the tax debt, stabilizing the foundation with self-consolidating fill by the July 1, installing a concrete wall adjacent to the garage doorway in the northwest corner, installing support pieces of concrete bases for vertical timbers where needed to support the first and second floor and replacing timbers, beam posts, flooring and wood in general.

“This building can be saved,” concluded Eastep. “Taxpaper money is better spent preserving than demolishing.”

Later in the meeting under New Business when the council was considering the Wesch-Oak demolition bids, Councilwoman Debra Johnston made a motion to table the acceptance of the lowest responsible bid and instead accept Eastep’s proposal to stabilize the building.

After a second by Councilman Craig Romey, in order to discuss her motion, Johnston was then asked a series of questions by fellow councilmember Caitlin Turner regarding Johnston’s possible conflict of interest in the matter. Turner’s questions included whether Johnston had money invested in the Wesch-Oak project, whether she was one of the people Eastep had lined up to help with the project and whether Eastep was currently staying at her home while he was in town.

Johnston responded in the negative to all of Turner’s questions.

Despite her responses, Councilman Wes Grimes said he agreed with Turner that Johnston may have a conflict of interest regarding the Wesch-Oak and asked the City Attorney Garland Goff to weigh in on the matter.

Goff said the process then would fall under the Robert’s Rules of Order and a councilmember would have to make a motion to determine if there was a conflict, they would then vote on that matter and then return back to the original motion.

None of the councilmembers made a motion to consider a conflict of interest, however another councilmember, Larry Pratt, did ask Johnston another question in regards to her potential conflict due to the fact she had once stated publicly that one of the reason’s she wanted on the city council was her desire to save the Wesch-Oak and other sandstone buildings in Hot Springs.

The council then voted down Johnston’s motion to table the matter by a margin of 7 to 1, with only Johnston in favor of the tabling.

After presenting the dollar amounts of the two demolition bids from RCS Construction and Veit and Company, Mayor Nelson said another issue that has been discussed in relation to the Wesch-Oak is the $83,000 lien that is attached to Wesch-Oak and another property in Custer that is owned by Robert Johnson with Hot Springs Citizens for Progress. The dollar amount is a judgement lien the City of Hot Springs has against Johnson because of a similar demolition that took place a few years ago of another condemned building on North River that was owned by Johnson. As a way to recoup the $83,000 spent by the city of that demolition, a lien was put on both properties in hopes that a Sheriff’s Sale could be forced with the proceeds going back to the City of Hot Springs.

One of the things which was going to be a “deal breaker,” according to Eastep, was that he was not willing to pay the $83,000 lien in order to acquire the Wesch-Oak, so he had asked the City of Hot Springs to forgive that requirement.

According to Goff, the City of Hot Springs was not able to forgive the lien on the Wesch-Oak without forgiving the entire judgement, which also included the Custer property, thus making it impossible for the city to receive any funds from the sale of that property as well.

“Ultimately, we’re still faced with that timeline of July 1st,” said Councilman Grimes. “The building has got to be secured by July 1st.”

“I don’t think that’s a problem,” replied Eastep. “It might not be pretty, but it will have all the sticks under it to hold it up.”

In order to come to some kind of finality to the discussion, Mayor Nelson interjected and said, “I know your passion for it. We’ve have the conversations. ... I can match your passion for saving the building with an equal number of folks that are passionate about, ‘it’s time for us to move on.’”

“It’s a matter of really what’s in the best interest overall for the community and the road project. It’s such a risk,” added Mayor Nelson. “I don’t know how as a council, we can sit in front of the community and say that, ‘Ron did the best he could. He had no intentions of not making this happen but for whatever reason, it didn’t happen, and now the road project is in jeopardy.’ That’s what this is all about. This road project is in jeopardy if this isn’t resolved.”

At the conclusion of the discussion, the vote to accept the demolish bids passed 7 to 1, with only Johnston voting against.