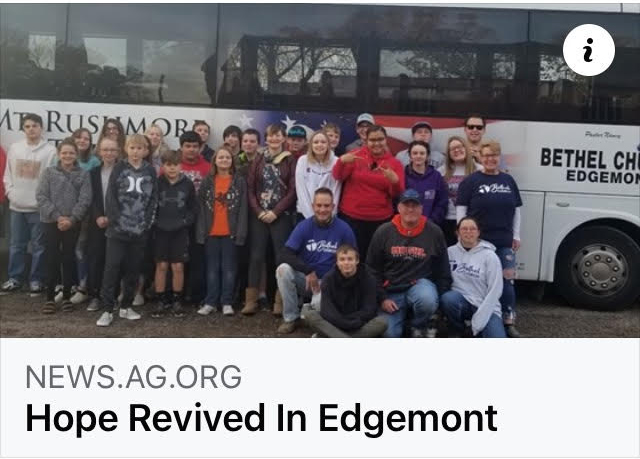 EDGEMONT – A November 2020 article written by an Assemblies of God journalist in Missouri entitled ‘Hope Revived in Edgemont’ has recently raised eyebrows, as it depicts Edgemont as a place where most children come from troubled homes and has led some to questioning the details of the relationship between Bethel Church and Edgemont School.

Dan Van Veen authored the article which was posted on the Assemblies of God website, but is no longer viewable online since it sparked backlash in the community over the last week as it was shared among users of social media.

The first section of the article paints a bleak picture of Edgemont. It makes reference to drug and alcohol-addicted parents and includes quotes from Edgemont youth that use terms such as ‘abusive’ and ‘unhealthy’ to describe their family environments with parents or other people accused of substance abuse. The article doesn’t try to put these comments into context in terms of what percentage of Edgemont homes include such abuse, but makes a blanket statement that implies a pervasive problem throughout the community.

The article also includes statements about church leaders Brad and Nancy Zachow and how they came to the area and began establishing a relationship between their church and community youth. Brad is the Principal and Activities Director at Edgemont School, and his wife Nancy is a youth minister at Bethel Church.

A notable quote attributed to Nancy Zachow in the article stated that she could only think of two or three kids that lived with their biological parents. The article also said that she makes “regular trips into the high school three times a week, introducing herself to those who are with kids from the youth group, getting to know more about them, and inviting them to youth.” It did not state anything about the timing of such visits, the nature of the conversations, and whether such interactions were permitted to occur during instructional (class) time as opposed to lunch or during breaks.

In an effort to offer their account of what was conveyed in the article, the Zachows agreed to meet with concerned members of the community at Bethel Church this past Sunday, March 21, at 11:30 a.m.

The meeting began with statements by each of them clarifying aspects of the article that they suggested had either been exaggerated or were instances of Nancy Zachow being misquoted, as she suggests was the case with the comment about how only two or three children live with their biological parents. She says that what she had actually told Van Veen was that she could only think of two kids that attended services with their parents. Although both are mentioned in the article, Nancy Zachow said that only she, and not her husband Brad, was interviewed for the piece.

During the meeting, Nancy Zachow addressed the topic of her visits to school that were mentioned in the article. She says that her conversations with students were chance encounters that happened when she joined her husband for lunch and were never scheduled. Kids would run up to her and start talking because of their familiarity with her from church. The conversations, she insists, did not include expressly religious topics as they most often amounted to her listening to students who wanted to visit with her about various matters of concern in their lives. In some instances, she was offering congratulations for an achievement and outside of lunch, she would appear at youth sports events if they didn’t have anyone from home coming to their games to support them.

The Zachows appeared to be genuinely concerned about how Edgemont as a whole was depicted and emphatically suggested that Van Veen’s description largely amounted to an exaggeration of information and painted an unintended picture of a town they claim as theirs. The couple also expressed that they would not presently be comfortable dining out in town based on some online comments by members of the community.

After the couple made their statements during Sunday’s meeting, members of the audience were invited to ask questions or offer comments. Several church members thanked the Zachows and offered their support in what has been a difficult week or so since the article became a topic of conversation locally. They suggest that the misunderstanding and anger created by the article has been heart-wrenching and misplaced. The hope is that now, since that attention has been given to the misinformation appearing in the article, any folks with lingering concerns or frustration will be willing to engage in civil conversations to address those matters.