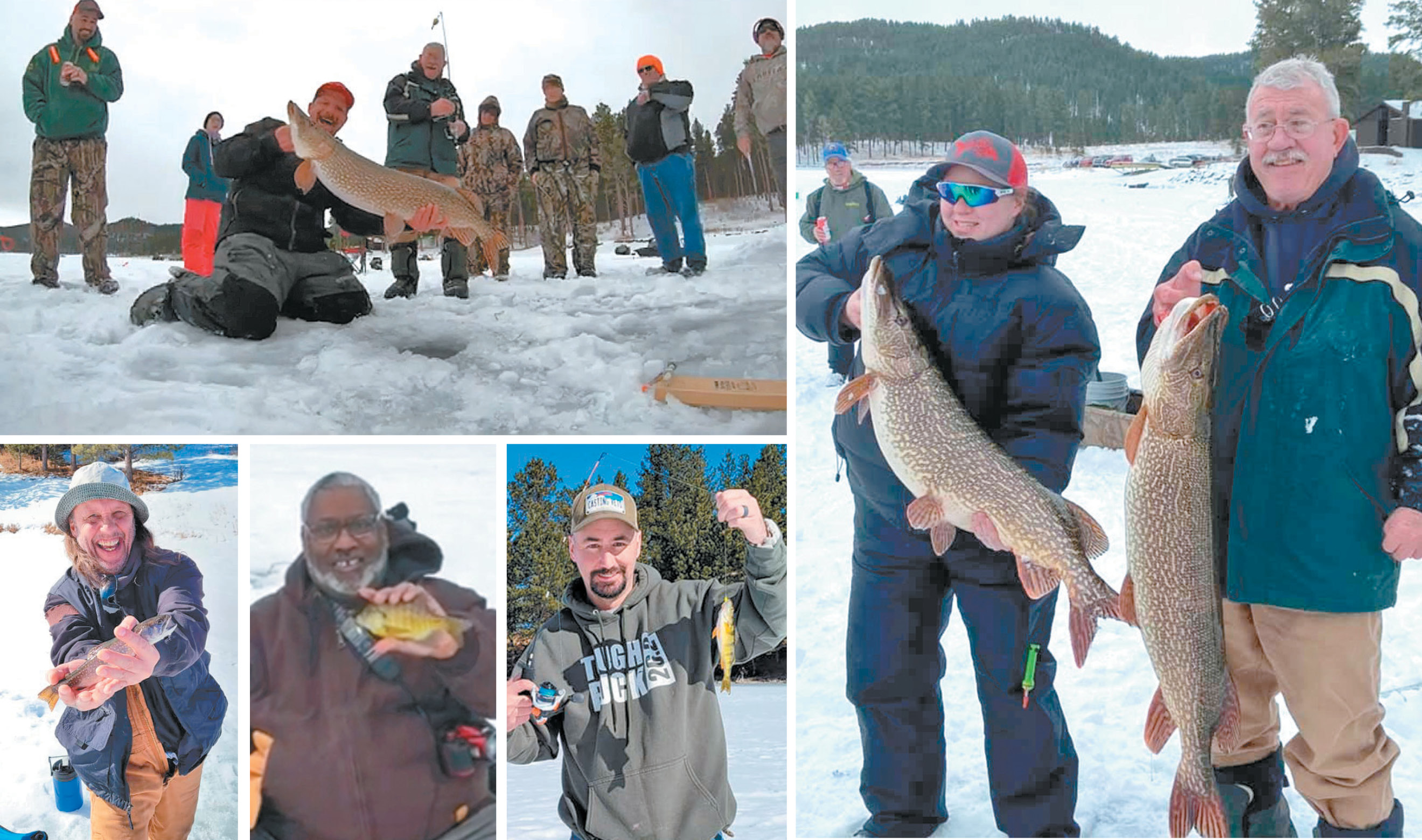 TOP LEFT: Joey Kruse with On Fish TV helps pull a 39-inch Northern Pike out of the ice for local angler Bob Miller (holding the pole) during a Casting Vets event at Pactola on Feb. 20.

FAR RIGHT: Local veteran Julie Schaffner and Bob Miller hold up the 39-inch Northern Pike they caught at Pactola on Feb. 20 during a Casting Vets event. Also pictured (bottom left) are veterans Melvin Leroy, Julius ‘JJ’ Johnson and JR Schaffner with some of their slightly smaller, but still proud, catches from Pactola and Deerfield.

HOT SPRINGS – With the mission “to improve the quality of life for all veterans one cast at a time,” the local non-profit organization Casting Vets isn’t limited to only taking veterans fishing when their casts can be long and across “soft water.” They also go out when the casts are a simple drop down through a round icy hole while sitting atop “hard water.”

According to both Julius “JJ” Johnson and JR Schaffner with Casting Vets, the isolation of wintertime can often bring on the darkest times for local veterans, of which there are 1,300 in Fall River County area alone. So being able to take a veteran out ice fishing may be even more important than doing so when the weather is more mild.

Ice fishing is not something that came naturally to either Johnson or Schaffner. Neither had spent a lot of time shuffling across the top of a winter lake in search of fish in the past. But thanks to the help of some local veterans – including fellow Casting Vets leader Summer Humbracht, who they both referred to as the “Ice Fishing Queen” – they began offering ice fishing outings last year.

The first ice fishing season proved very successful, as they took out around 20 veterans in the inaugural event in February 2020, which included many veterans whom had never before stepped foot on a frozen lake to catch fish. That success justified pursuing more ice fishing dates this winter and the printing of a promotional poster as a means to garner sponsorships. Three dates were planned, beginning with Jan. 10., which however was canceled due to the icy road conditions.

The group’s ice fishing trip to Pactola Lake on Feb. 20 was then the first outing of 2021, and it would prove to be a memorable one as two 39-inch Northern Pike were pulled up through the ice. The first was caught by Julie Schaffner and weighed in at 21.3 pounds, which is going to eventually decorate the walls of the Schaffner home. The second was caught by Bob Miller and weighed 18 pounds. He decided to let that one go back into the lake for another lucky angler to feel it tug on his or her line.

The second and final ice fishing trip this winter was to Deerfield Lake on March 6, and while there were not any wall hangers pulled through the hole on this day, everyone did catch their share of trout, blue gill and perch.

Attendance by area Black Hills veterans to this year’s two ice fishing excursions wasn’t as high as it was last winter, with only about a half dozen veterans at each event plus an equal number of volunteers. But according to Johnson, he attributes nearly all of that to COVID concerns and the lockdown being enforced by the VA in relation to its patients in the domiciliary.

When Johnson, a veteran of the U.S. Navy, founded Casting Vets a few years ago, he did it with the hope of helping fellow veterans in the Hot Springs VA domiciliary who were struggling with sobriety, like he did as well. With the help of his treatment at the Hot Springs VA and his love of fishing, he eventually became sober.

“In my own recovery, I have found a peaceful place. A place in my mind that is receptive to both sobriety and recovery,” says Johnson, who is quoted as such on the Casting Vets website. “The pathway to this place is illuminated by my love for fishing. This illumination is now my passion to help others achieve sobriety one step at a time, and a better quality of life, ‘One Cast at a Time.’”

The Casting Vets website also says, that according to a 2009 study, fishing can lower PTSD symptoms and increase the mood of those who suffer from the disorder. After three days of fly fishing, participants reported a 32 percent reduction in guilt and a 43 percent decrease in feelings of hostility. The feeling of fear was also reduced by 30 percent and sadness dropped by 36 percent.

Schaffner, a combat veteran of the U.S. Army, became involved with Casting Vets after being asked to help by Johnson a couple of years ago.

While he too wants to see Casting Vets help the veterans in the VA Domiciliary find that “peaceful place” to sobriety and recovery, he also understands the mental struggles veterans face with PTSD, having personally lost multiple “brothers” to suicide.

“I know for at least those couple of hours, those guys are OK.”

When asked if he felt Casting Vets had met the expectations he had for the organization when he set out to found the non-profit a few years ago, Johnson said that COVID had had a negative impact in how it has prevented them from reaching the veterans in the domiciliary. However, one thing that has been very positive and shows that they are becoming more well-known is the fact that larger organizations have been reaching out to them for their help, instead of the other way around.

Last winter, they were contacted by Joey Kruse with On Fish TV, who produces an online fishing show through YouTube. He has since accompanied Casting Vets on some of their outings and broadcast the event online which has helped promote their cause to help veterans.

Also recently, the S.D. Army National Guard has reached out to Casting Vets to see if they would be willing to participate in an upcoming state program in Sturgis next month. The South Dakota Game, Fish & Parks also recruited Casting Vets to partner with them for their weekly “Hook’Em and Cook’Em” events at Angostura Recreation Area.

Casting Vets is also seen as an integral part of the Hot Springs OpVet program that is being developed by the Save the VA group.

For more information about Casting Vets, check them out on Facebook or go to their website castingvets.com.