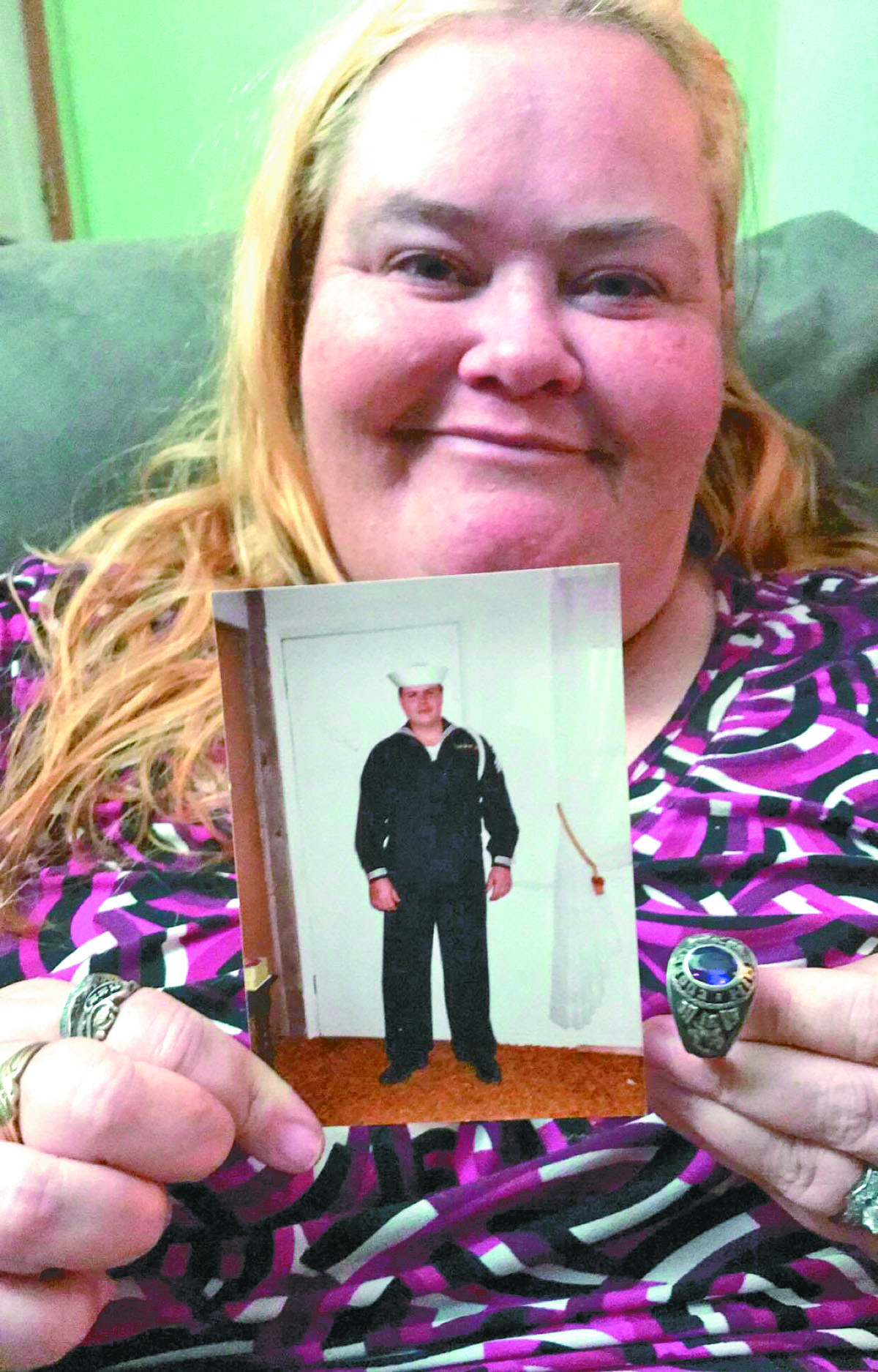 Eva Nyquist is pictured here with a photo of her late brother Brian Evans whose lost class ring was found by Joe Atterberry a couple of weeks ago.

EDGEMONT – You’ve probably heard of a ‘needle in a haystack’, but not likely a ‘ring in a rubble pile’. That’s what Joe Atterberry found when he flipped over a piece of concrete in the 5th Avenue residence he purchased four months ago and was cleaning up. Much to his surprise, a class ring with the year 1985 engraved on it came bouncing out of the debris. Almost as soon as he picked it up, Atterberry’s inclination was to unite the ring with its owner.

He decided the best place to start was the Edgemont Library where librarian Stacie Harter helped him out by looking at yearbooks in an effort to identify the person the ring belonged to. Through their research, Harter had a hunch that may have belonged to one of the Evans brothers who attended school in Edgemont in the 1980s.

Shortly after Atterberry’s visit to the library, local resident Eva Nyquist and her family ventured into town on a Sunday afternoon to pick up a tractor they’d taken in to be worked on. They had made a stop at the Benchwarmer to pick up a take-out order when Harter, who works there on weekends, came out and told Nyquist, “I have a story for you.”

Harter described Atterberry’s account of finding the class ring. Nyquist found herself in total shock at the news of this discovery. She was the only girl in six children born to Jack and Teresa Evans. Three of her brothers have passed away.

Harter told Nyquist where she thought Atterberry lived and Nyquist decided to drop by the residence to visit with him and inspect the ring in person. After arriving and introducing herself as possibly the sister of the person the ring belonged to, Atterberry had his daughter go inside and bring it back out. Upon inspection, the ring was engraved with the initials B.K.E., indicating that the ring was that of her brother Brian whose middle name was Keith, and not Bob, whose middle name was Lee.

Brian Keith Evans, who served in the U.S. Navy, passed away in 2005 from heart failure. In spite of the years that have passed, the discovery and return of the ring resonated deeply with Nyquist.

“It was such a miracle to get it since both of those brothers are gone and have been for a long time,” said Nyquist. “ To get a keepsake like that back after so long and for it to still be in such good shape for being tumbled around for so many years.”

Nyquist feels certain that her brother likely lost the ring while he was still a teenager. She looks forward to sharing the discovery with her mother, who she says will ‘have a little bit of her boy back again’.

“She is the strongest woman I know. She has had to bury her husband and three of her children and she still tries to keep marching on. It has taken a great toll on her but she always tries to keep on the positive other then always telling me she only has the three of her kids left and nothing better happen to us.”

Nyquist extended her gratitude to both Joe Atterberry and Stacie Harter for helping the lost ring find its way back to the owner’s family.

“Because they didn’t have to, it makes me feel good to know that there is still humanity in the world,” she said.