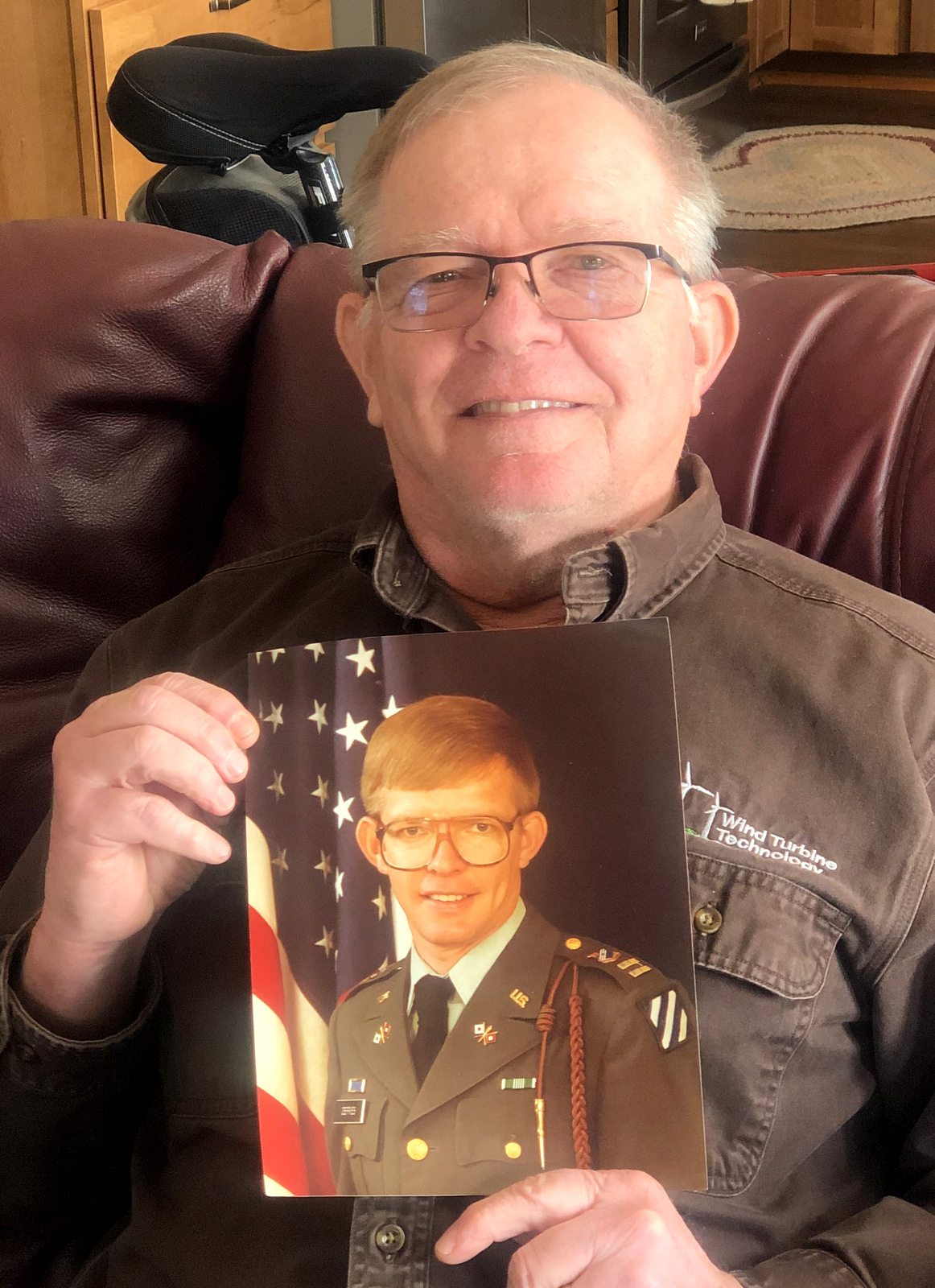 Dan DeFries, retired Lieutenant Colonel US Army, holds a photo of himself in 1980 as a Captain in the United States Army. (Photo by Charity Maness/FRCH-S)

“I milked the cows and tended the hogs and chickens,” recalled DeFries, “my brother was older so he drove the tractor.”

After running the old milk separator his mom would use some of the cream to bake with making mouth watering meals for the children. “We were what was referred to as ‘dirt poor’” said DeFries, “but we didn’t really know we were, everybody was back then. There were only a handful of farmers that actually owned the land they farmed.”

The DeFries children attended a one room school house until the 8th grade walking to and from school unless “it was really cold”.

“School was different back then, today we have safety, then we had a playground merry go round where you could stand in the middle to really get it going and people would fly off as it spun around. We played softball against other one room school houses but had to knock gophers with baseball bats to clear the field, things you can’t do these days.”

Though the brothers would make extra money working on other farms when they were done with their chores on the family farm it wasn’t long before their father realized that they were not going to grow up to be farmers. By the time DeFries and his older brother began to attend Springfield High School his father moved the family into town and took a job as a butcher.

“I knew as soon as I got into high school that I wanted to attend college,” said DeFries. While enjoying his studies, mainly mathematics, DeFries also took part in wrestling and football though never excelling in either attributing that to his slight weight of just over 100 pounds. “I wasn’t any good, but I loved it.”

After graduation DeFries attended Southern State Teachers college majoring in electronics. It was here that his future was set in stone.

“I joined the ROTC my first year in college. If I hadn’t joined I would have been pulled out and gone into the military with a darn good chance of going to Vietnam with a draft number of 6.”

At the end of his junior year he received n ROTC scholarship which paid for his fourth year of college and required a four year commitment to the Army. “At this time, married with one child, I knew I was going to go into the Army, I wanted a career.”

In 1975, at 22 years old, DeFries graduated college with a BS in Electronics Technology and was commissioned as a 2nd Lieutenant.

He attended Signal Officers Basic Course in Georgia at Fort Gordon, then on to Fort Bragg, North Carolina with the 426 signal battalion as a signal officer overseeing communications for the unit.

By 1979 DeFries achieved the rank of Captain. At that time he was with the 18th airborne corps ‘gaggin’ dragons’ signal unit, 426 signal battalion.

“The wall was still up and we were still worried about war with the Soviet Union,” said DeFries, “that’s what we worked towards all the time, were we ready if they came through the folded gap? The 1/76th field artillery had 8 inch self propelled guns ready at a moment’s notice. Our mission was when the enemy comes through the gap we were there to support the 3rd infantry division. We practiced and practiced and luckily we never had to implement our training; there was a lot of talk back then, but thankfully nothing happened.”

By 1984 DeFries was back on American soil stationed at Fort Huachuca, Arizona - an electronic proving ground - as a test officer.

“We worked on the first GPS here,” said DeFries. “I was one of the first to actually take a GPS - larger than our laptop today - put it on my back with a tethered hand held to see if it worked. We were in Yuma, Arizona, a proving ground with tagged spots. You would punch in coordinates that had already been surveyed which would go to a satellite and then a return location would be sent from the satellite to tell you where to go, much like the little arrow on your car GPS that tells you the final location. So somewhere out in that desert was a pin that we had to find. Of course this was all done in the middle of the night and we were supposed to find this pin in the middle of the desert. Yet lo and behold, the device would send us right to the spot, it was almost always right where it was supposed to be.”

It worked so well DeFries was part of a two unit team sent to Panama to test its efficacy.

“Of all the times to send a team, we were sent when Panama was going through the uprising, we flew in and there were fires in the streets and rioting. And we had 2 million dollars worth of equipment in our car heading to our hotel. We made it through but arrived at the hotel and were told that no one was supposed to be there. So, no hotel, riots, what next?  We lived around it for a week until we could leave.”

The device was successful in communicating navigation to satellites through such terrain, even when crossing the Panama Canal. Yet true GPS would require surveyed locations which were not available at that time.

In 1986 DeFries was assigned the Sergeant York Project. A project, that according to DeFries, was a waste of time, resources and money.

The Sergeant York Project was a tank outfitted with 40 mm British Bofors anti aircraft guns. “Basically a British canon on a M48 Patton tank chasis,” explained DeFries. “The object was that in wartime when troops moved forward they needed protection against aircraft, it was supposed to automatically hone in on a target and shoot it down…it didn’t.”

During this time missiles aboard aircraft that could travel five times further than the Bofors 40mm were already in use, yet the project was never stopped. “It was really a waste of time and money. It couldn’t shoot the distance it needed to be effective. We took it to Whitesands missile range to test this thing, 3 times a helicopter passed and each time it failed. It was supposed to be able to shoot up to over a mile, but we never saw it do that. It was a multi-million dollar snafu.”

DeFries attended Naval Post Graduate school in Monterey earning a Masters in Electrical Engineering and was promoted to Major.

In 1989 DeFries was stationed in Frankfurt, Germany with the Science and Technology Center- Europe at the Abrams Building working as an electrical engineer. “I traveled about Europe looking for any technology that could be a threat to the US or our troops if we went to war. It wasn’t just European, or Russian, it was any country.  I would go to trade shows, air shows, and conferences and collect data and paperwork on what was being developed and write a report to be sent back to the US.”

DeFries was promoted to Lt Colonel in 1992 en route to Fort Monmouth, New Jersey. Here he was tasked with testing the new Army computer system that was still in the developmental testing stage; the Army tactical command and control system, a system used to address overload during mass use in wartime.

Yet this duty caused much frustration for DeFries. “Technology never seemed to keep up. Just when something was perfected another latest greatest invention would be already in working status and be ready to be in use. Computer technology changed so fast, it was already old before it got there, antiquated before they even got to put it into use.”

“In 1995 I was looking at the possibility of making Full Bird yet I was going to have to invest another five years for the process.” Though thrilled with all the experiences and traveling the military had offered DeFries and his family, “My wife and I felt we had moved the children around enough and decided to move back to South Dakota.”

DeFries didn’t cool his heels upon retirement as he continued work within the electronic field for many years followed by a few more years teaching wind energy at Mitchell Technical Institute in Mitchell, SD.

Now, residing in Hot Springs, he enjoys dabbling in various work industries here and there as well as hunting and fishing with hopes to retire to a lake. “When I move to a lake then I’ll retire, I’m wearing out.”

His advice to youth today: “In life, it’s your decision. What do you want to do? It is always your decision, weigh your opportunities well.  I never stopped and thought I couldn’t do this, we just did it.”