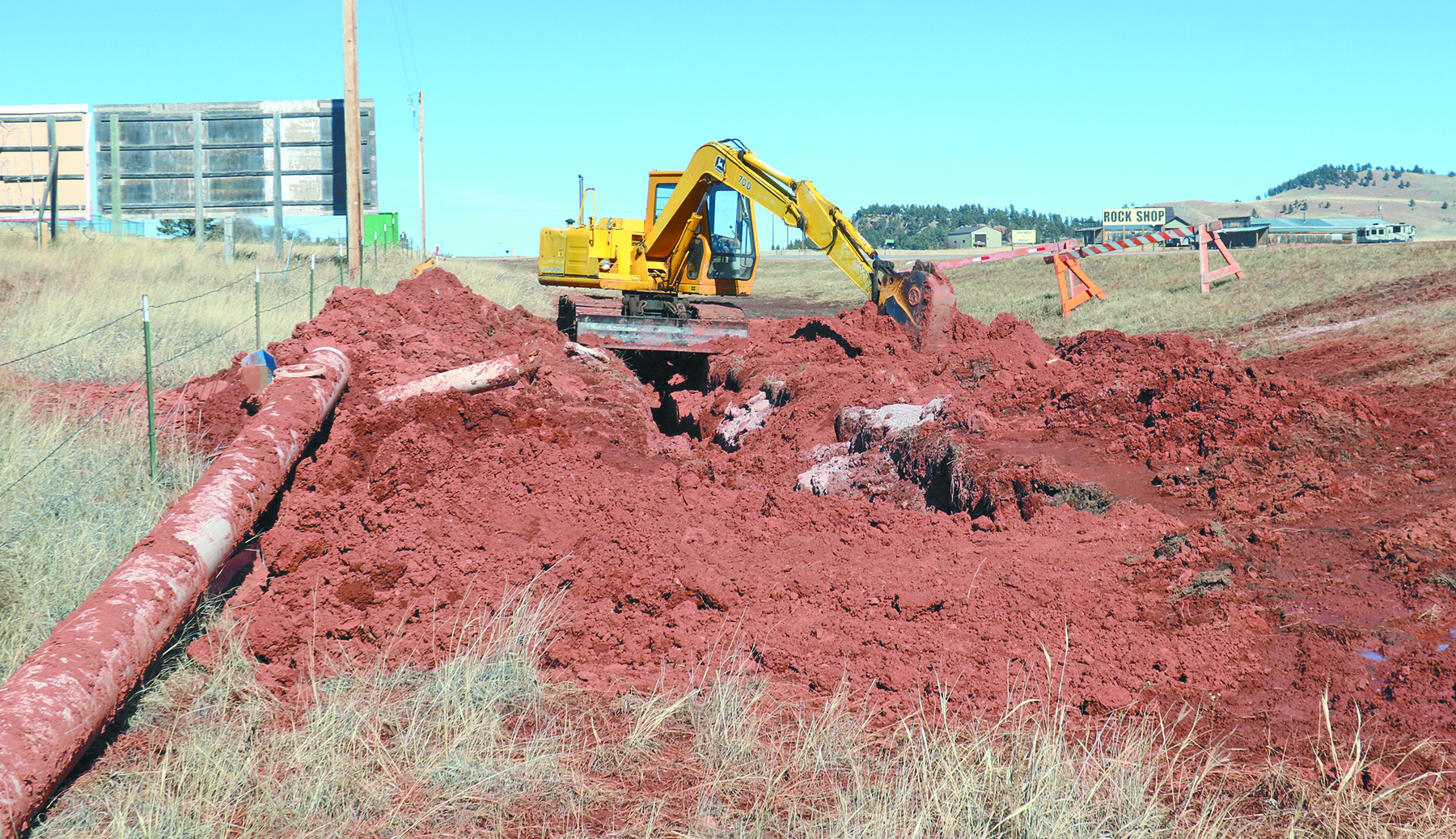 A piece of heavy equipment sits above a trench just north of Hot Springs along Hwy. 385 where a rural water main line ruptured last week. A 40-foot piece of 12-inch pipe (pictured on left) had to be replaced which forced some customers in the area to be without water for up to four days.

HOT SPRINGS – About 50 customers of the Southern Black Hills Water System were without water for up to four days last week after a main line ruptured early Sunday morning, Feb. 21, along Hwy. 385 near the Black Hills Energy facility.

Many of the people most affected by the incident lived in and around the Cobblestone Estates subdivision just off of Argyle Road. The residents there and others in the nearby area did not regain water until the evening of Wednesday, Feb. 24. However, some customers further north on Hwy. 385 were only without water for about a day and got it back within hours of the break late Sunday.

According to System Board Chairman Ted Wick, the rupture set off an alarm which notified system personnel immediately to take action, but not before the entire 140,000 gallon reservoir tank was depleted. Once the valved system was shut down and the reservoir allowed to refill again, several customers on the northern end of the main line had their service restored.

Wick said there are around 400 total customers within the entire Southern Black Hills Water System, with those customers geographically located as far north as near Keystone and around Hart Ranch in Pennington County, to as far south as the west side of Angostura Reservoir in Fall River County. A different rural water system known as Fall River Water Users serves rural customers east of Angostura.

The water break last week involved a 40-foot long length of 12-inch pipe which proved time-consuming to replace, partially due to excessive water runoff that made conditions difficult to get in equipment and get the job done.

According to System Manager Don Peterson, the work was done as quickly as possible considering the conditions. Last week’s incident was only the second water break of any significance in the 10 years SBHW has been serving rural customers in the area. With the first break that happened six years ago, Peterson said it took three days to repair that as well.

In addition to needing to replace the large piece of pipe inside the more than 8-foot deep trench, both Wick and Peterson said there was also considerable time needed to flush the pipes to discard any potential contaminants from the break, along with trapped air.

He added that while most customers were understanding of the situation, there was at least one customer in particular who was upset with how long that it took for the repairs to take place and that, according to the customer, there weren’t adequate emergency protocols in place to help alleviate the inconvenience that it caused.

A System Board meeting was held on Thursday, Feb. 25, where some of those concerns were expressed. Peterson said the board is looking at a couple things to help potentially help alleviate issues in the future, which includes putting in more valves to allow the system to be shut down to fewer areas while allowing the water to still flow to other areas. Based on some other feedback from customers, Peterson said the board also discussed possibly trying to make arrangements with places like Evans Plunge so customers can take showers during a future outage. For the most part however, Peterson said those without water were able to make their own arrangements with friends or family, similar to if there were some other kind of other short-term utility outage for whatever reason.

For more information about the Southern Black Hills Water System, their website is www.southernblackhillswater.com. Their phone number is 605-745-4669. In addition to System Manager Peterson, the Operations Specialists is Dar Coy. A listing of the all-volunteer board of directors can also be found on the website.