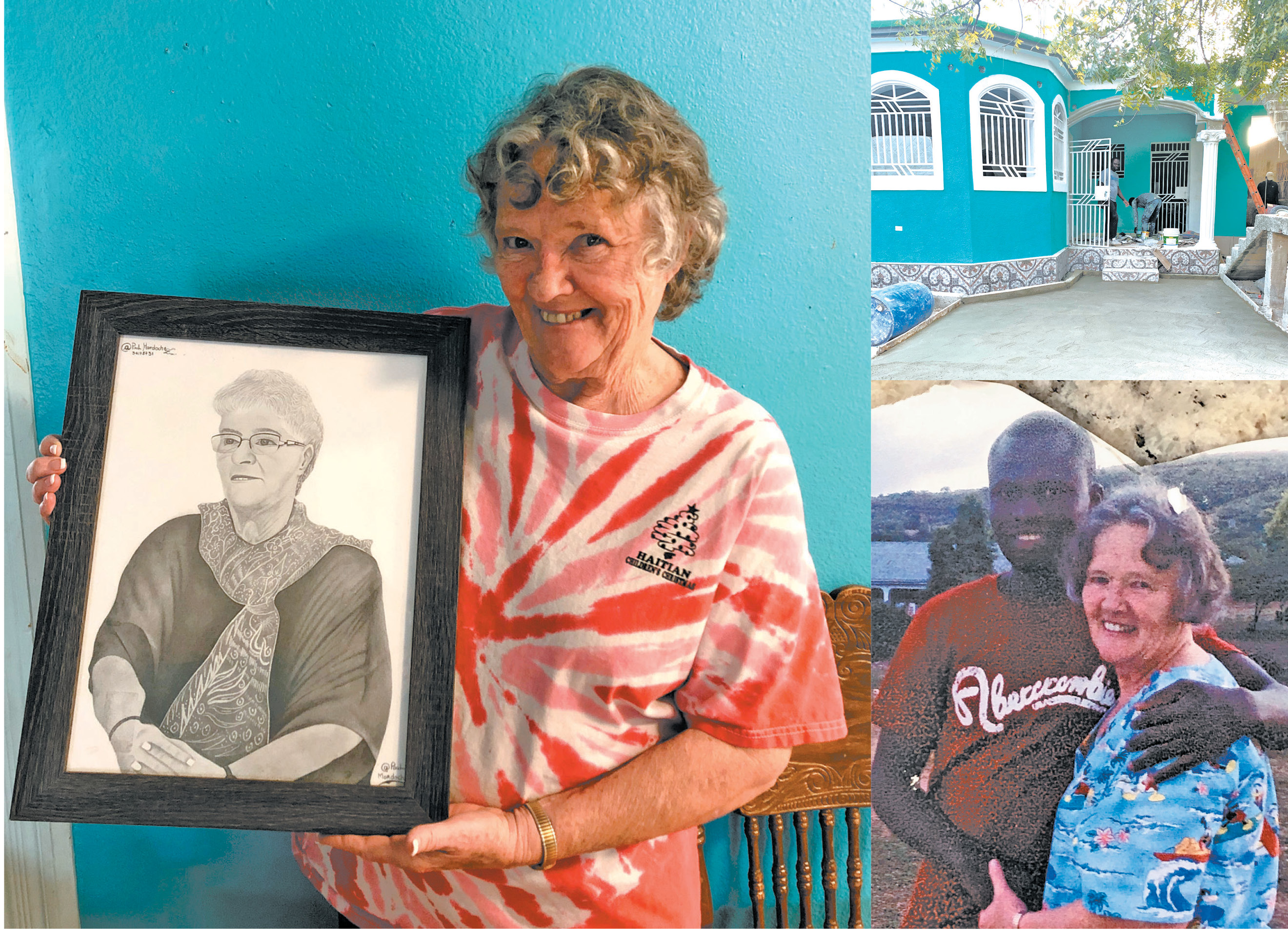 LEFT: Annie Zwetzig of Hot Springs holds a black and white print of the portrait of herself that is now a mural on the Clinique Medicale Annie Zwetzig La Gonâve. (Photo by Charity Maness/FRC Herald-Star)

HOT SPRINGS – Making a difference one person at a time with love and the word of God has been a passion of Annie Zwetzig’s for as long as she can remember; a passion that touched one life so profoundly that a medical clinic was named in her honor.

“My whole life, for as long as I can remember, has revolved around children,” said Zwetzig the fifth of seven children, as well as a mother of five and foster mother to currently seven children.

It was natural being from such a large family and raising her own brood to welcome any and all neighborhood children to her home. “My front door was a revolving door with neighborhood children in and out at all times. I remember one time my husband and I heard a noise downstairs one night but we were both too tired to check it out. The next morning when we went downstairs we found the living room floor covered with sleeping teenagers. That’s just how it was, kids all the time. I cooked a lot of food,” she laughed. She even recalled getting thank you notes from some of the kids thanking her for the food.

Her life added another rewarding layer when she took the job of Christian Education Director at United Churches (UC)  in Hot Springs, a job that would forever change her life.

“One day I was at my desk and an information mailer came across my desk about a mission trip to Haiti, I thought ‘I want to do that’. So I called them and told them ‘Count me in, I want to go’.”

Beginning in 1996, the mission trips took her to the island of La Gonâve, a small island off the gulf coast of Haiti, with a population of just more than 100,000 and diverse ecosystems.

Now, nearly 25 years later, Zwetzig has a dozen mission trips under her belt, each trip breathing more life into her passion, and each trip leaving a bit more of her heart with the people and children she has met.

“I will never forget that first trip to La Gonâve,” she said. “It was so amazing, I learned so much. The people were so poor, the children were so very hungry. We built a foundation for a school and every single rock for the foundation was carried by a woman; she carried the rock on her head.” It wasn’t long before Zwetzig found herself playing with the children. “The children, they just seemed to come to me. We talked, we played and we laughed. I did a little bit of work, not much and felt bad, but the pastor said I was doing what I was called to do. At the end of that trip many of the Haitian moms wanted me to take their babies back to America, they truly wanted me to.”

Zwetzig found that her lack of any medical background was not a hindrance to her work within the missions’ teams, with the teams participating in building schools, churches, desks for the schools, providing bible schools for 100-200 kids, and a variety of medical clinics serving up to 1000 patients per visit.

“When we were on a medical mission we had a whole team of medical personnel as well as some support staff. I would help by getting the names of the patients and what information I could. We tried to help everyone we could. Some people who needed extra care that could not be tended to by us we would often fund their medical care at a hospital in Port-au-Prince.” Such as a woman who had been badly burned over her open kitchen fire, or the young girl with a horribly infected tooth, the gentleman with the hernia, the list goes on and on.

“After my third trip I became a team leader,” said Zwetzig.

It wasn’t long before the people of La Gonâve became her extended family. So much so, that Zwetzig and her team informally adopted one young orphan as their son; William.

The team met William when he was tasked with rolling the 50 gallon barrels of water for the teams use. William dreamed of one day becoming a doctor.

“Years later when William graduated high school we took him under our wings and sent funds to the college so he could attend school in Port Au Prince.”

William was excelling in college. Yet when he learned his United Churches family would once again return to his home island of La Gonâve, he boarded the next boat for the one-and-half-hour ride to assist them in any way he could.

“It was then that the earthquake hit Haiti,” said Zwetzig “his whole school collapsed killing many of the students and most of his professors.”

Clean up was long, heartbreaking and tedious.

In order to finish college, William would need to attend school in the Dominican Republic which required him to learn Spanish. William took the challenge head on soon adding Spanish to his language repertoire which already included English, French and Creole. William completed school and realized his dream of becoming a doctor.

Now, 10 years after first meeting the young William, he has opened a medical clinic on the very island the United Churches mission team has been visiting each year, a clinic he has named the Clinique Medicale Annie Zwetzig La Gonâve’, after his adopted mother Annie Zwetzig, a clinic where no one is turned away.

“During the clinic dedication he spoke of how he loved me,” said Zwetzig, “I love him too, we all love him, it was the church that made this happen, I was just the boots on the ground.”

“Annie is a tireless worker and organizer with a true heart for the people of Haiti,” said Pastor Rev. Dr. David A. Cook. “Her Christ-like enthusiasm is an inspiration to our entire congregation.”

With the help of the United Churches the clinic now has an ultrasound machine, a vehicle outfitted as an ambulance, an x-ray machine as well as medical equipment and supplies. William has expanded the clinic to include a maternity room and lab as well as medical personnel who travel to the hill regions reaching more with much needed medical care.

“We are so blessed with the generosity of our congregation and our community,” said Zwetzig, “people have been so generous. I believe they know that all that they give goes straight to those in need. We, as team members, pay our own way as well as contribute funds to the mission, so literally all the money raised goes directly to the people.”

Zwetzig is already excited about the 2022 mission trip with William helping the team formulate the community’s needs, be it medical, bible study, education or building. “Whatever the need we will be there,” said Zwetzig, “but I do know already that I am bringing a lot of children’s shoes! Children cannot attend school unless they have shoes therefore a lot of children don’t get to go to school.”

“I do believe that if there were not missionaries, the people of Haiti would have nothing, we have been told that often” said Zwetzig. “They depend on missionaries. If they find out you are coming they are excited, they want us to come.”

If you are interested in participating in a mission trip or would like to donate please contact the United Churches at (605)745-5640. Donations can be mailed to United Churches, 342 N. Garden St, Hot Springs, SD 57747, note Haiti mission in the memo line.