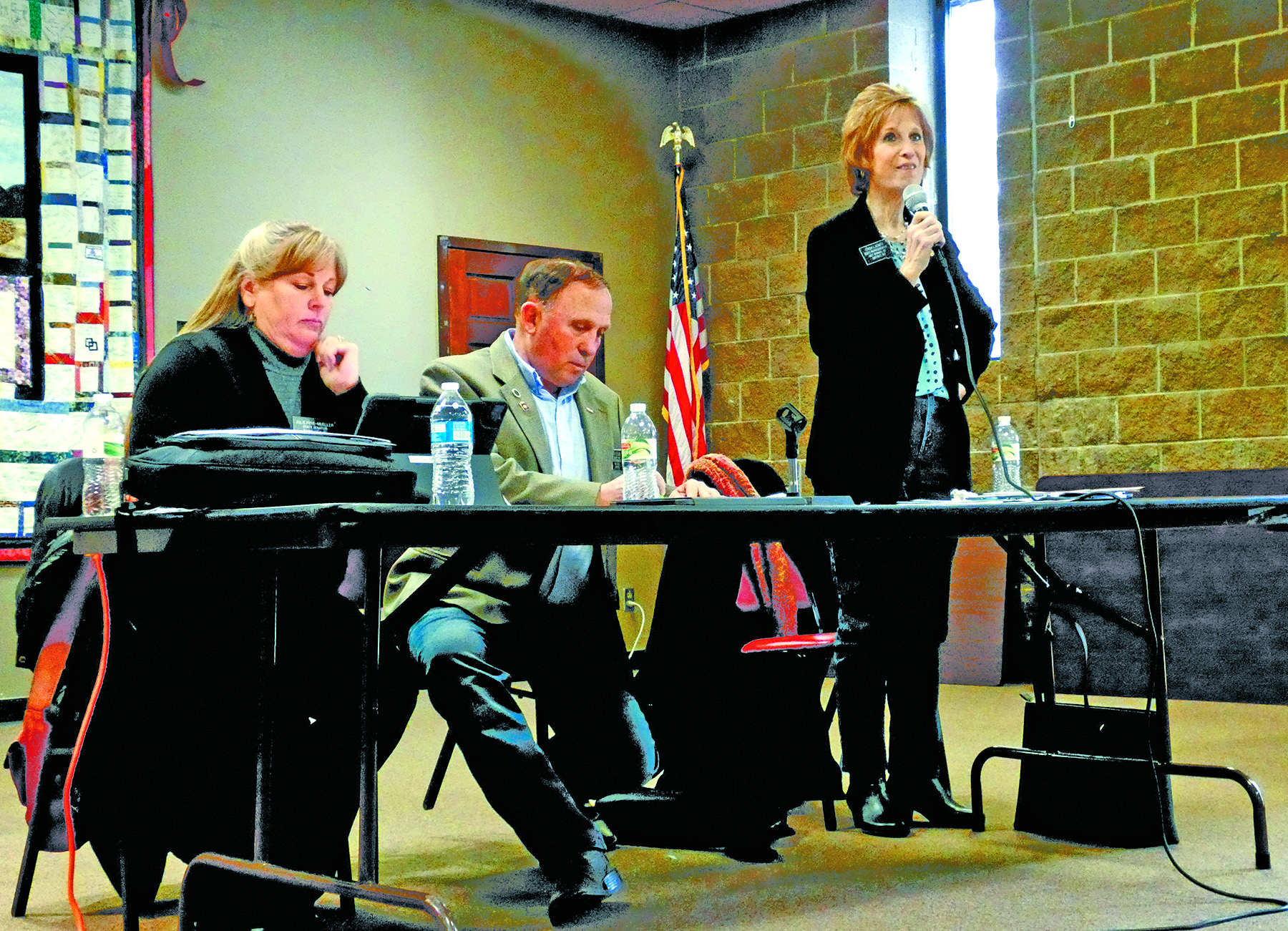 HOT SPRINGS --- About 75 people attended a District 30 Legislative Crackerbarrel this past Saturday afternoon, Feb. 20, in Hot Springs, which according to the legislators, was the most-attended crackerbarrel they have attended outside of Rapid City this year. The event took place at the Mueller Civic Center and was hosted by the Fall River County Herald-Star and also co-sponsored by the Fall River County Republicans.

All three elected officials from District 30, which included Senator Julie Frye-Mueller and Representatives Tim Goodwin and Trish Ladner, were present and spoke about bills and issues they had been involved with during this year’s legislative session in Pierre. The lawmakers also answered questions from the public on a variety of topics.

The two-hour session began with opening remarks by Brett Nachtigall, Publisher of the Herald-Star and facilitator of the event. Nachtigall welcomed everyone to the crackerbarrel and introduced not only the legislators but also all elected officials in attendance which included Hot Springs mayor Bob Nelson as well as members of the city council, Fall River County Commissioners, and local school board members.

Each legislator then made brief opening remarks.

Representative Tim Goodwin, who is the Republican Majority Whip, spoke first and discussed the importance of getting high-speed internet and crystal clear cell phone service for every South Dakotan.

“I am going to fight to the death to get that done this session,” Goodwin said.

Representative Trish Ladner was sworn into her first legislative term on Jan. 12 and got to work immediately.

Ladner is worried about South Dakotans who are experiencing a rapid increase in their property values and corresponding taxes. Ladner does not want to see her constituents priced out of their own homes and is currently working on ideas of how to bring property taxes down.

“We need it. All three of us are pushing for it. This is the new highway system of America,” Ladner explained.

Senator Julie Frye-Mueller said she is in her third year of trying to change the wording in a law that makes it possible for public school employees to perform “non-emergency invasive physical exams” on students.

“If it is a non-emergency...don’t do anything to the child,” she said.

Frye-Mueller also had concerns about skyrocketing property taxes in South Dakota and hopes that something can be done about the issue in Pierre sooner than later.

The floor was then open to questions from the audience.

Bill Lukens, City of Hot Springs council member, inquired about the status of medicinal marijuana in the state.

“We will implement it,” Goodwin stated. “But we have to roll it out right.”

House Bill 1100 was introduced in Pierre on Jan. 27, and Goodwin is in favor of the bill.

Frye-Mueller added that there are many questions to answer before implementation and that the bill is “eating up a lot of time” in Pierre.

Ladner discussed how she has been interviewing local doctors and they have been telling her that they feel the roll out of medicinal marijuana in South Dakota should not be rushed and needs “quality control.”

Goodwin explained that other states took their time rolling out medical marijuana and that representatives in Pierre have been using neighboring North Dakota, where voters approved medical marijuana in 2016, as a model.

Hot Springs resident Paul Kimble asked the legislative panel if a city or county municipality can pass an ordinance to not allow marijuana within their jurisdiction.

Goodwin responded that if a municipality wants out, they should “have every right.”

Hot Springs resident Jason Rutz relayed to the panel and audience that those with certain health conditions have had “lots of success with cannabis.” Rutz hopes that medicinal marijuana becomes available to South Dakotans and that the voter-approved Initiated Measure 26 is not somehow overturned in Pierre.

Holly Cotton and Sierra Dross, both local mothers who homeschool their children, asked the panel for their opinions on Senate Bill 177 which deals with parental choice, testing requirements, and extracurricular activities all in regards to homeschooling.

The bill allows students who are homeschooled to participate in extracurricular activities at public school if certain requirements are met.

Goodwin explained that he was still undecided about the bill and wishes that the language included in the bill would be handled at the local school board level.

Although mentioned earlier in the session, the issue of property tax increases remained a hot topic.

Custer County resident David Reid said he protested his property taxes increases for the past two years at the Department of Revenue in Pierre. “I partially won,” he said.

Frye-Mueller said that part of the problem is people from out of state moving to South Dakota and paying much more than the actual cost of a house or property.

“We live in the prettiest part of the state and people want to move here,” she said.

Goodwin reiterated that District 30 needs property tax relief and that things may get worse before they get better. He said legislators in Pierre need to come up with a plan so that South Dakotans do not get kicked out of their own homes because of higher costs.

One of the last issues brought to the panel was the Sheps Canyon Road.

The road, which is a county road located south of Hot Springs off Highway 71 and leads to state-owned property on the west side of Angostura Reservoir, has been a contentious issue of late.

Sheps Canyon Road is currently gravel, but residents who live along the road feel that an increase of traffic on the road – partially due to the further development and promotion of Shep’s Canyon Recreation Area by the Game, Fish & Parks – has made the road much more hazardous on which to travel.

An effort to pave the road died at the state Capitol after an 8-5 vote against last week. See more on this topic in this week’s County Commission story on page ____.

Jeanine Lecy, who lives on Sheps Canyon Road, applauded the Fall River County Commissioners for all of the hard work they have done to not only maintain the current road but also how they have fought to get the road paved.

“The state built the state park (on Angostura Reservoir) but didn’t think about the road,” Lecy said.

“South Dakota Game, Fish, and Parks created [the road],” said Goodwin. “We will regroup and try again next session to get it paved.”

Other topics brought up by members of the audience included abortion, Second Amendment rights, the possibility of a convention of states, creating a spur trail from the Mickelson Trail to Mount Rushmore, public school funding, small business relief and additional stimulus checks from Washington, and transgender issues.

The legislators then made their closing remarks.

“If there is anything I can do to help you, let me know. If you are in Pierre we would love to show you around the Capitol,” said Frye-Mueller.

“I want you to know that we work for you. I got hired by the people of District 30. You hired me. You are the ones that can fire me. I think it’s a pleasure to serve you and if you ever need anything just let me know,” said Goodwin.

The audience then had the opportunity for some one-on-one time with all three legislators that lasted approximately another hour.

Senator Julie Frye-Mueller: (605) 773-3821, This email address is being protected from spambots. You need JavaScript enabled to view it.

Representative Tim Goodwin: (605) 773-3851, This email address is being protected from spambots. You need JavaScript enabled to view it.

Representative Trish Ladner (605) 773-3851, This email address is being protected from spambots. You need JavaScript enabled to view it.