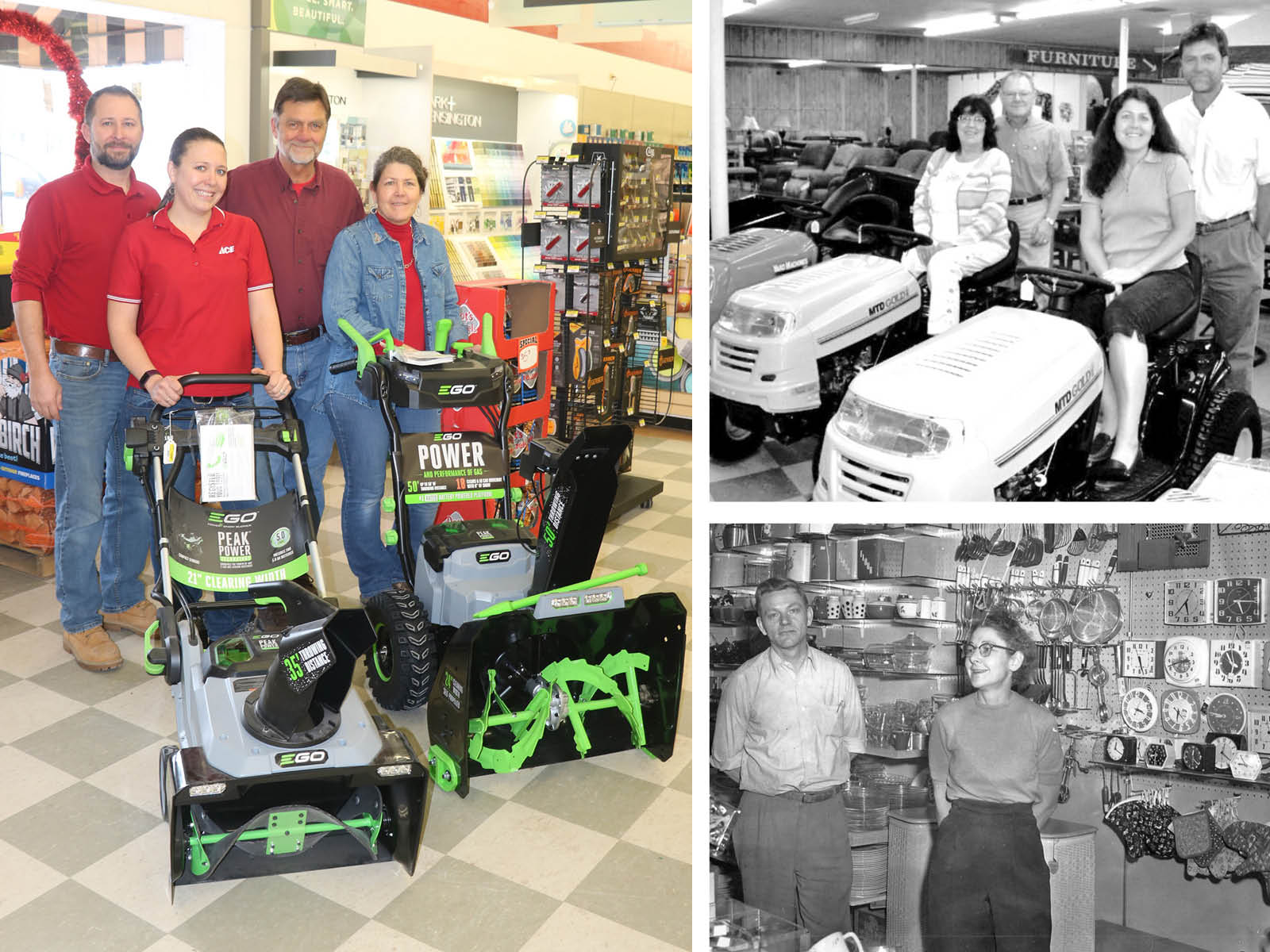 LEFT: New Hot Springs Ace Hardware owners Brad and Kelly Bednar (far left) stand behind one of the store’s E-GO snowblowers. Next to them is Kelly’s parents, Gary and Terry Slagel who have owned the local store since purchasing it from Terry’s parents nearly 13 years ago.

BOTTOM RIGHT: Hardware store founders, John and Genevieve (Wright) Blatchford pose in front of a display in their new store in 1954, after it moved from North River to its current location on South Chicago Street. The Blatchfords first opened the store as a Coast-to-Coast in 1935.

HOT SPRINGS – In 1935, when John H. Blatchford and his wife Genevieve purchased the small hardware store at 323 North River Street in downtown Hot Springs, the couple likely had dreams that the hard work they were putting into their new enterprise, which soon became known as Coast-to-Coast, would stay within their family for many years to come.

Now, more than 85 years later, there’s no doubt they would be very proud to know that their great-granddaughter Kelly and her husband Brad Bednar recently took over ownership of their business – now known as Hot Springs Ace Hardware – to make it one of very few fourth-generation businesses in the Black Hills area.

While it may have been the Blatchfords’ dream to see their small business remain with family for this long, a 2014 study published by the Family Business Alliance shows that the reality of that happening nowadays is quite rare.

However, an even more recent study shows that those numbers are probably even less now, with the first transition dropping from 30 percent to only 19 percent, due to Millenials not wanting to take over the traditional family business, but instead selling and using the proceeds to start a different, but still family controlled, enterprise.

The purchase of Ace Hardware by the Bednars from Kelly’s parents, Gary and Terry Slagel, represents yet another chapter in the longstanding Blatchford family history in Hot Springs.

After purchasing the existing hardware store on North River Street in 1935, Kelly’s great-grandparents eventually moved their business to a brand-new 4,000 square foot building at the current site on South Chicago in 1954. That was then later expanded 8,000 square feet in 1978 to cater to the “Do-It-Yourself” market by adding lumber, paneling, cabinets and other similar items.

The first transition of ownership to a second generation took place around this same time as John and Genevieve’s son Tom, and his wife Georgia (Bowker), purchased the business. Prior to that, Tom managed the hardware store for his parents for about five years, following a few years of him and Georgia operating some other local business ventures including the Char Chief Cafe, The Nugget and the former Country Club at the golf course.

With their three children – Terry, John and Christine – working off-and-on for them in the store over the next 21 years, the Blatchfords, oversaw the transition of their hardware store from Coast-to-Coast, to True Value and then finally Ace Hardware in 2000.

On Father’s Day, June 15, 2008, a third generation of the family took over operation of the local hardware store when it was purchased by Tom and Georgia’s eldest daughter Terry and her husband Gary Slagel. Prior to moving back to Hot Springs to purchase the business, the couple lived in Texas and Colorado where Terry taught school for 18 years and Gary had a career with the Bureau of Land Management.

During the Slagels’ near-12-year ownership of the store, they remodeled the exterior and also added a number of new product lines including Ashley Furniture, lift chairs, a wide selection of giftware, expanded paint area, and Bonnie Plants, to name a few.

In 2015, their store was also named the “Small Business of the Year” by Black Hills Community Economic Development.

Prior to moving back to their hometown of Hot Springs, the Slagels raised two children in Colorado, including a son Greg, and their daughter Kelly.

Greg, now aged 38 and living with his family in Santa Fe, N.M., is a computer engineer. Kelly, now aged 34, married her Chicago-born husband Brad just over 10 years ago and were beginning their family in Colorado.

But in 2018, Kelly and Brad were looking for a change from the Denver suburbs and a safer place to raise their young son and daughter, so they moved to Hot Springs. At the time, Kelly was working on finishing up her Master’s degree in teaching, while Brad, who managed the Evergreen Lake House for the Evergreen Parks and Recreation Department in Colorado, was contemplating a new job offer. After moving to Hot Springs three years ago, Brad took over as a department manager at Ace, and is who implemented the store’s new line of appliances.

“I’ve always loved it here,” said Kelly last week as she and Brad talked about their decision to take over the family hardware store in Hot Springs.

“Dad has been putting a bug in my ear about it for probably 10 years,” Kelly laughed as she described how that ‘bug’ was then relayed to her husband Brad as well.

“The idea hit at a point when we were ready to do other things,” added Brad, age 43, who is very much liking the slower pace and closer-knit ties of a smaller community after living his entire life previously in bigger cities.

Terry Slagel said that Brad and Kelly’s new ownership of the store is coming at a very much different time in their lives compared to when she and Gary purchased the business in 2008, as both already had long careers in other fields and were near the end of raising their children into young adults.

Gary recalled the fact that they were actually looking at moving back to Hot Springs in the early 2000s and possibly purchasing other businesses to buy, when Terry’s dad Tom asked them, “What do you know about listing a business for sale?”

“We kind of took that as his way of hinting to see if we would purchase the business from him,” Gary laughed.

“They (Brad and Kelly) are at a much younger stage of their life than we were,” Terry said, as she described how it may be more difficult for them to balance operating the business while raising their two young children, which includes son Porter, age 7 and in 1st Grade at Hot Springs Elementary, and daughter Emerson, age 5 and in pre-school.

Kelly however said she is very confident, that despite the added responsibility of still having young children at home to raise, they will be successful, thanks to the support of an excellent staff, many of whom she has known since she was very young herself.

The store currently has a total of 13 employees, and while Gary is anxious to get started on his retirement, he will remain, in his own terms, an “on-call consultant” for his daughter and son-in-law.

Terry, on the other hand, is far from ready to retire as she still has two other businesses in Hot Springs which she will now be able to devote more time to, including Fall River Fibers and the Chautauqua Artisan’s Market, which are housed in the building the Slagel family owns at 631 North River.

For Brad and Kelly, they say they can’t be more happy with their decision to move to Hot Springs and become an important part of the locally-owned business community, which became official on Wednesday, Feb. 3, 2021.

“We look forward to continuing to serve this community and getting to know even more of you over the coming months and years,” Kelly stated in a Facebook post the day of their purchase. “New ownership… same great staff, same great service, same great ACE.”