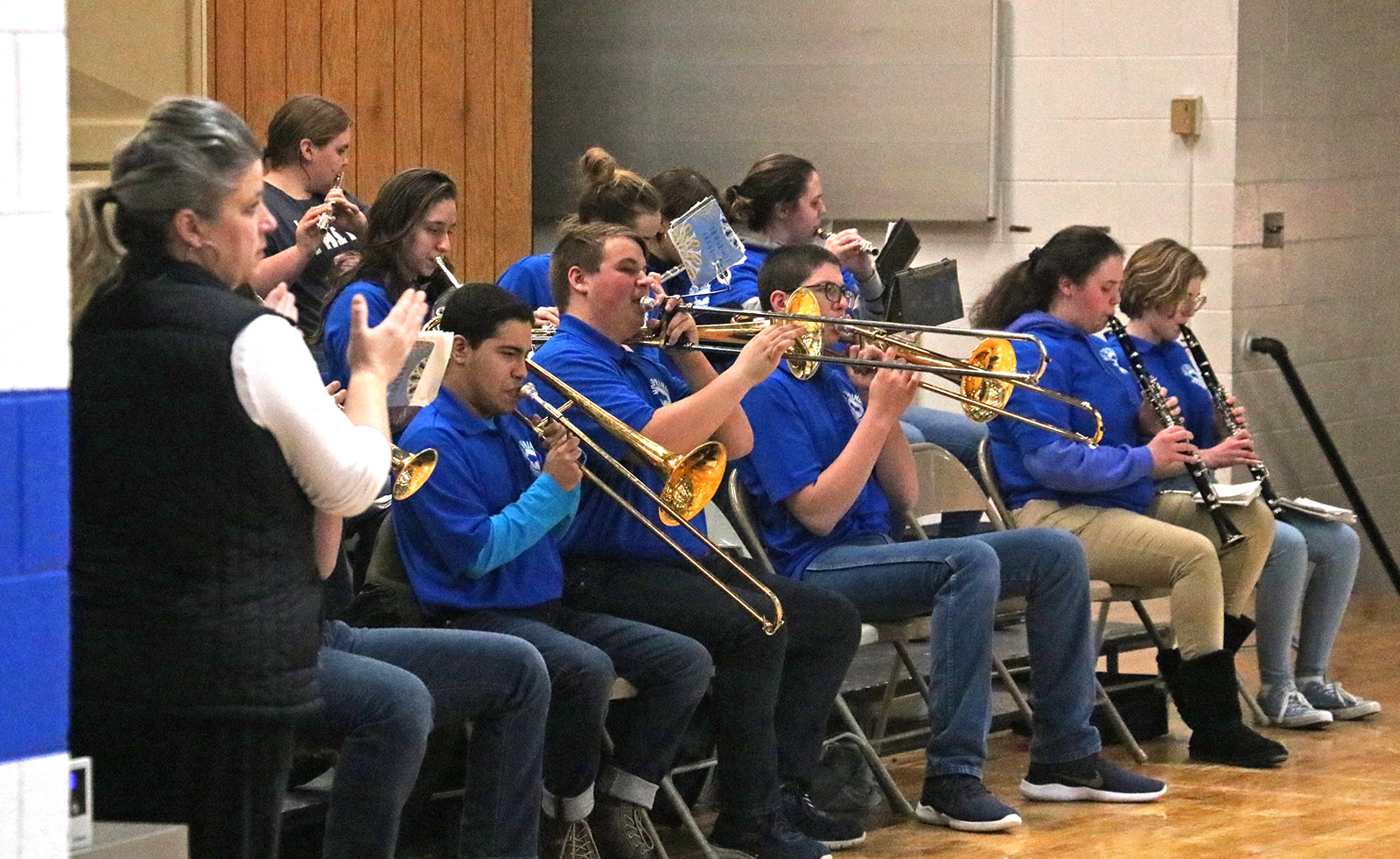 HOT SPRINGS – At its Monday, Feb. 8 meeting, the Hot Springs School Board heard ideas from the public and a teacher regarding the need for more music and counseling staff, as well as a presentation from MSgt Joseph Schniers to add a new Junior ROTC program in the high school.

During Public Participation, community member Garry Strausser reminded the board how the band and choir teachers in the middle and high school had been cut in half from two to just one, as part of the then-board’s more than $400,000 budget cuts in 2018.

Since that time, Strausser said current band/choir teacher Melissa Vande Stroet has been doing an excellent job while performing “beyond anyone’s capabilities.” He however said there needs to be more than one music teacher in the district and that “the current situation spells burnout.”

“No one can do what she’s been asked to do,” Strausser said.

Julie Bossert, a band parent and current president of the Hot Springs Bison Fine Arts Booster Club, had a similar message for the board.

“Three years ago, when there were cuts and it was decided that the band and choir positions could be combined, we knew it was only a matter of time before that was no longer going to be feasible,” Bossert said. “Mrs. Vande Stroet’s experience, organizational abilities and basic classroom control are the only reasons that programs has survived and thrived.”

Bossert then referred to how well the high school pep band has been performing lately at most all home basketball games, which she said has only been made possible because Vande Stroet has been able to organize individual lessons during the class room day.

“Unfortunately, Les Chantuers, while a wonderful group of singers, has been taking the brunt of the cuts,” Bossert said. “They are only able to rehearse twice a week, and mixed choir rehearses the other two days.”

She added, that without a current 7th or 8th grade choir class, it’s not feasible to grow a choir music program without middle school students being developed to fill that need in high school.

According to Bossert, there are currently 11 students on Les Chantuers, which includes one senior, seven juniors, two sophomores and a freshman.

“Next year, when those seven seniors graduate, that leaves us three kids in Chantuers, and that’s the group that represents us when they sing the Star Spangled Banner and they go out to contests and compete as Hot Springs Bison,” she said, while adding that the 2018 budget cuts also eliminated summer band, which is where the students learn to march and perfect the homecoming halftime performance.

Bossert then referenced how the school this year had added programs like Robotics and STEM. “Those are great, wonderful things and adding to the music program is only going to enhance all of that,” she said, while adding how being exposed to music as a student has a positive impact on people their entire life.

“I think the one position (for both band and choir) was a Band-Aid for a temporary problem,” she concluded. “At some point, the effectiveness of that is going to wear-off. Its very much a temporary fix but what we need is a permanent solution so that these kids can thrive.”

Bossert then referenced how, according to the S.D. Department of Eduction website, out of 17 area school districts of similar size to Hot Springs, only four of them have only one band/choir director, and only two of them are larger than Hot Springs.

Also in reference to the budget cuts of 2018, current middle school instructor Corrine Hammel urged the school board to replace an eliminated counselor position.

Similar to how the two band and choir positions were combined into one beginning with the 2018/19 school year, so too were the two high school and elementary counselor positions, which is currently being filled by Simon Jamieson.

“Our kids need a full-time counselor in each building,” stated Hammel during Public Participation. “At the beginning of the year, we had a presentation about mental health and helping our students through a pandemic. The teachers and admin cannot do that alone. They need the support of trained individuals to help with that.”

Hammel went on to say that no district in South Dakota that is Hot Springs’ size has one counselor to serve all the students in Pre-K through 12.

“Our enrollment numbers are 756,” she said. “No district our size has one counselor to service 756 students. In fact, every school our size and larger, and many schools smaller than us, have a counselor dedicated to only Pre-K through 5th grade.”

She then said that Lead-Deadwood has one counselor per building, Belle Fourche has a total of three to cover their three levels, Custer also has one in each building while Hill City, which has 300 less students, has a counselor devoted specifically for the elementary.

After hearing pleas to add staff for music and counseling during Public Participation, the school board was then also asked later in the meeting to consider adding a new Air Force Junior Reserve Office Training Corps (AFJROTC) program, with a potential start date targeted for the second semester of next year.

MSgt. Joseph Schniers presented the idea and was joined by high school student Nick Mumma, who was the one who originally inquired about getting the program added to the high school’s offerings.

According to MSgt. Schniers’ presentation, the JROTC program is designed to develop citizens of character dedicated to serving their nation and community and would develop into a seven-period program taught in all four levels of the high school.A typical high school student will spend two clock hours per week studying Leadership Education material, two more on Aerospace Science subject matter and a fifth hour in wellness education, culminating in 120 -180 contact hours per year.

The requirements of a host school, like Hot Springs, is to approve the curriculum type, which MSgt. Schniers recommended making it an elective; pay half of the required two instructors salaries based on their military pay grade; and provide adequate classroom, office, storage and drill space.

High School Principal Troy Lurz said adding the new JROTC program would be a good opportunity to put something new in front of the students which would in turn potentially open up expanded opportunities to them in the future.

School Board President Bob Preuss said the concept would be looked at by the Curriculum Committee and then referred to the Finance Committee for possible funding.