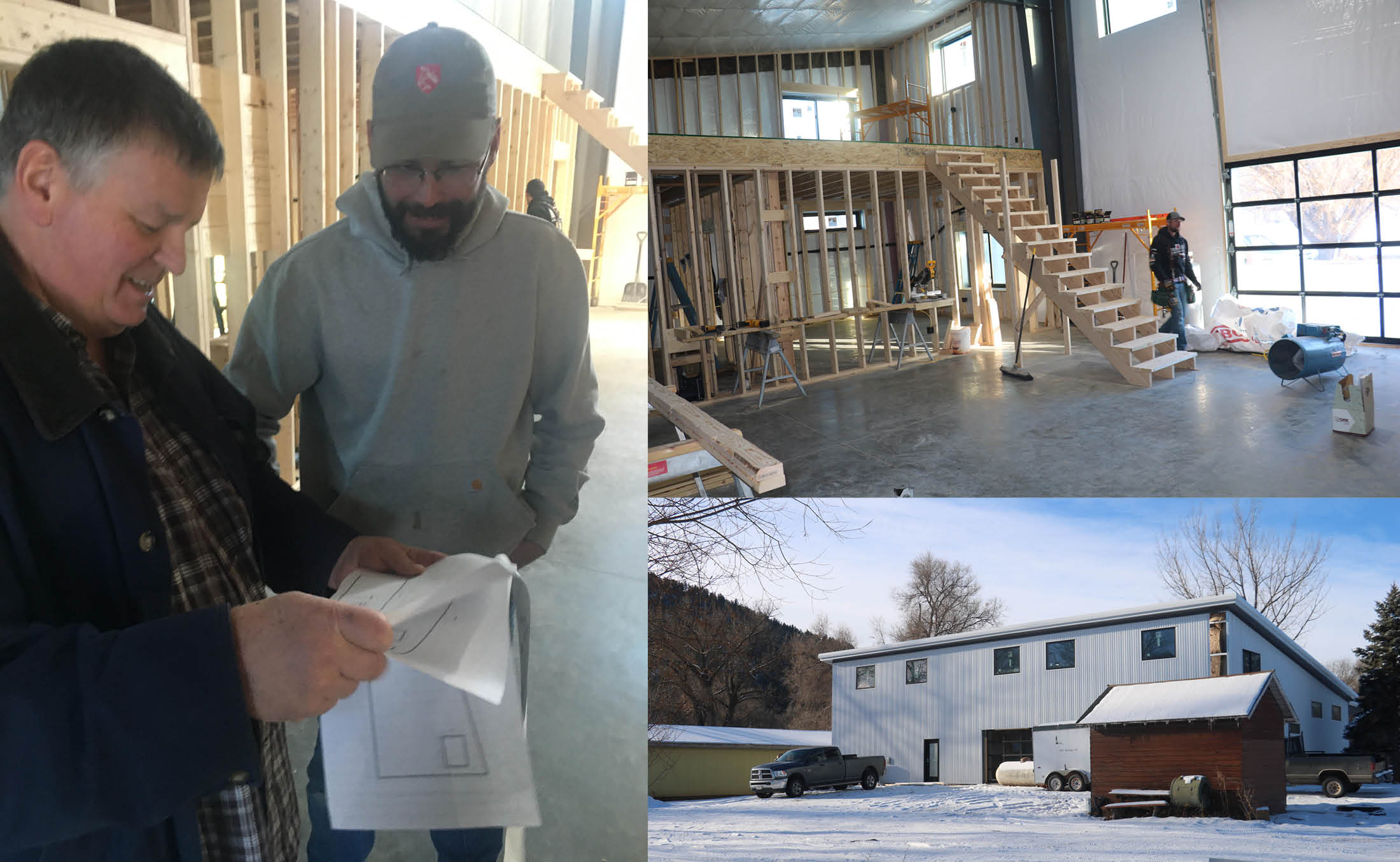 The new home of Frank and Alisa Birkholt being constructed on South 6th Street in Hot Springs can be described as a “Barndominium” and will include both a large shop/garage area as well as living quarters.  LEFT:  With contractor James Forbord looking on, Frank Birkholt holds a set of plans for the home which he drew up himself and then had Forbord help refine.  TOP RIGHT:  A temporary staircase leads up to a loft which overlooks the kitchen/living room which will open up into a Three Seasons room that will be accessed by a roll-up glass door.   BOTTOM RIGHT: This is the east facing exterior of the building which looks towards the nearby soccer field and business district on Jennings Highway.

HOT SPRINGS – When the new home of Frank and Alisa Birkholt began to go up this past November, there was a lot of speculation of what it could be.

Given its large steel frame construction and its location between the lumber yard and civic center, a lot of people made the incorrect assumption that it had to be a new commercial building of some kind.

Even Frank himself had some fun with people’s curiosity and began telling a few people that he heard it was going to be a Panda Express.

“If you haven’t heard a rumor by noon, then it’s time to start one,” Frank recently joked, while adding that one of the funniest rumors he had heard was that is was going to be a marijuana dispensary.

The truth however is that the large steel-sided structure is indeed going to be the Birkholt home and falls into what is becoming a growing trend across the United States – Barndominiums.

The term comes from the combining of Barn and Condominium and is sometimes shortened to “Barndo.” Typically of steel construction, the structures are essentially what the name would suggest and include both a shop or garage along with living quarters.

For the Birkholts, the idea of living in mostly a one-level home is what appealed to them the most when they began planning to build their new home. Having a large shop area for tinkering and storing Frank’s classic 1966 Ford Mustang was another big selling point. The couple had previously built a multi-level home in 2005 at Southern Hills Golf Course and lived there for several years, raising their two children, but sold it early last year.

Since then, they’ve been renting the former Agenbroad home, that is nestled into the hillside of the Seven Sisters at the bottom of the truck bypass, and planning their new home on South 6th Street.

The erection of the Birkholt’s new “barndo” took a specialty crew only about three weeks to put up the steel frame and fully enclose it in steel siding by working seven days a week from 7 a.m. to 7 p.m. The building was purchased through Kerry Barker of Edgemont, who is a rep for Armstrong Steel Buildings. James Forbord with Forbord Custom Construction is the general contractor. Forbord and Seth Bossingham can be seen working on the project now most every day.

Once completed, the home will be a total of 3,500 square feet which also includes a large 30-foot x 50-foot shop (1,500 sq.ft.) with an auto lift, plus a smaller second garage measuring 16-foot x 20-foot (320 sq. ft.). The main living space includes a large and open high-ceiling kitchen and living room area, plus an office, master bedroom with bath along with another bathroom and guest bedroom on the main floor. There is also a loft above with additional rooms.

Despite the front of their home facing South 6th Street, Frank said they wanted the main focal point to be the back, which faces the nearby soccer field and businesses along the Jensen Highway. The back of their home then features a roll-up glass door which will open into a Three Seasons-style enclosed patio.

The overall concept of the building can be described as Industrial Modern, said Frank, who added that most of the interior design came about from his own scratchings and sketches on paper, which Forbord then converted into an actual plan.

Forbord, who has been a longtime friend of the Birkholts, said these kinds of “design-build” projects are the ones he finds most fun and rewarding to do.

The property on which they’re building has also been a question on which area residents have wondered. Frank, who is a lifetime resident of Hot Springs, said their isn’t necessarily anything particularly sentimental about the property, but he has known both of the families who used to reside  on the two lots he and Alisa purchased back in 2017.

Their future homesite is the combining of lots that were previously owned by Bill Hacker and Cleo Adams. The structures on the lots were likely built in the 1940s or possibly even earlier than that, Frank said. The entire area was once all farmland known as the Trimmer Addition, created by George Trimmer who had helped design an irrigation network for his crops with part of it known as the Trimmer Ditch. The ditch is still present and serves as part of his property line’s eastern border that runs alongside the nearby soccer field.

While most all of the Hacker and Adams run-down structures will be eventually torn down, the Birkholts plan to keep one of them and use it as an exterior storage shed. One large cottonwood also had to be removed, but some other very large willow, walnut and spruce trees will remain.

After living on the golf course for about 15 years, Frank said he has already noticed how much more peaceful it will be living in town again. He said he is also looking forward to having neighbors closer by and being closer to the town’s amenities.

He added that they hope to be moved into their new home by the end of April.