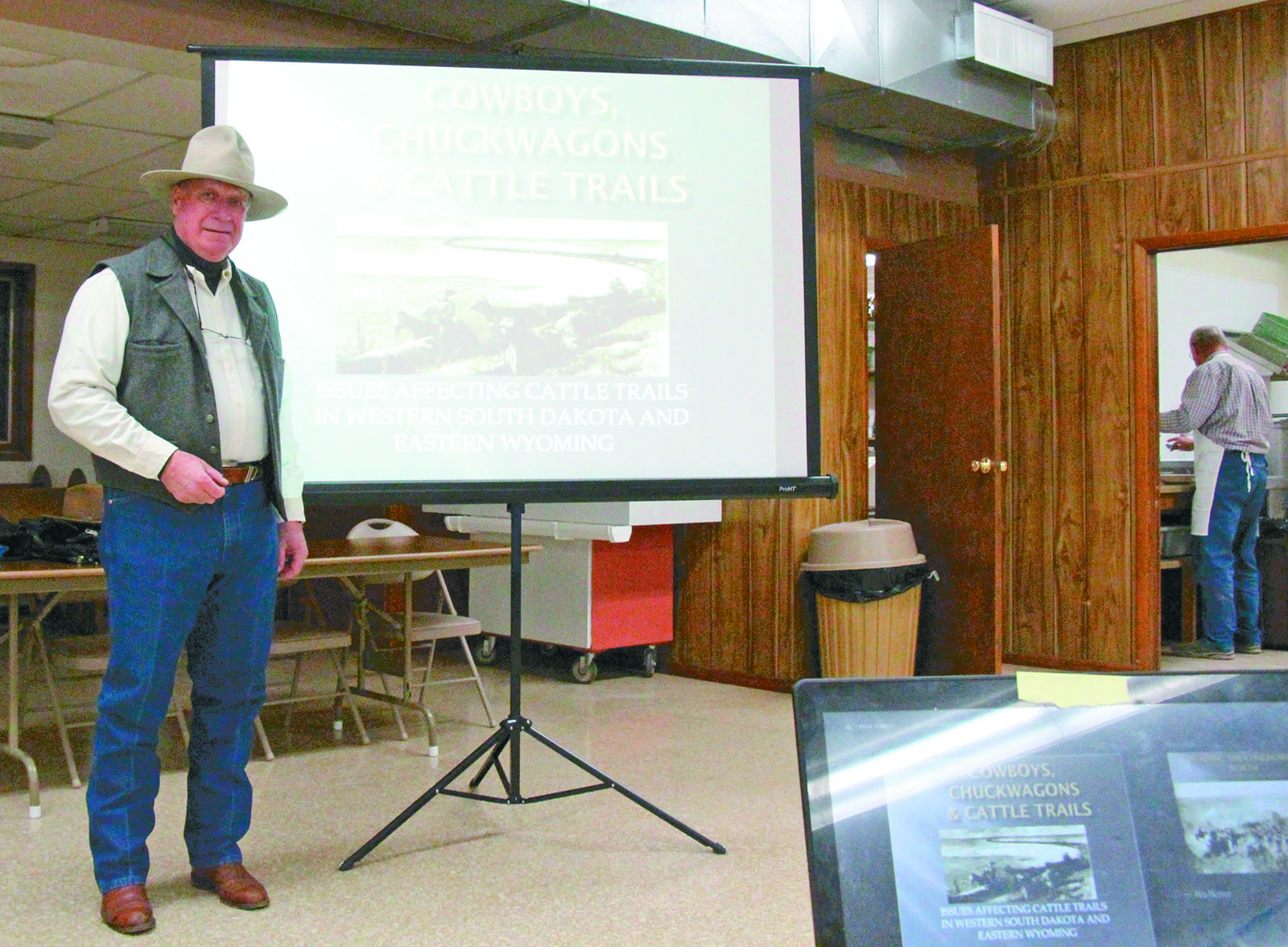 Richard Kaan was the featured speaker at last week’s Edgemont Area Historical Society’s Meeting. He gave a presentation titled “Cattle Trails” which details the history and change of the period that saw Texas longhorns moved by cowboys from the Texas plains to northern Great Plains destinations where they would be fattened on summer pastures.

EDGEMONT – Edgemont Historical Society’s annual meeting at the St. James Catholic Church on Tuesday, Feb. 2, featured a presentation by Richard Kaan on the causation of the Cowboys, Cattle and Trails from Lone Star state to the railroads and finishing ranges of South Dakota, Wyoming and Montana. The routes the longhorn cattle were trailed to the northern plains passed through Fall River County and the ranch south of Lusk, Wyo., where Kaan was born and raised. Physical evidence in the form of cattle trails still remain as a reminder of days gone by of the romantic expansion of the American West and the Black Hills of South Dakota. Kaan’s presentation outlined the political, cultural, and economic factors that affected the movement of cattle from Texas to eastern markets and northern prairies.

Some might not be aware that the Civil War, also known as the ‘War of Rebellion’, had a tremendous impact on the cattle market and how and where cattle came to be marketed in the years after the conflict ended. The war destroyed the economies of the north and the south, according to Kaan, through its impacts on production, transportation, and consumption. The war destroyed crop fields, freed slaves, destroyed the railroads and bridges, and devastated the value of currency as well as the fueled tensions that lingered between the north and the south. Millions of free wild cattle gave Texas the opportunity to recover its economy by marketing the Longhorns for processing in the Midwest and grazing in Northern Plains states.

Kaan said there were also social ramifications of the war that were felt in the west. Hundreds of thousands of orphans such as those who became figures like Calamity Jane migrated south and west to places like Texas that were warm and hospitable for those poor, forlorn folks who often owned little more than the clothes on their backs. Some that trekked south and west were Confederate fugitives who fled to such destinations in an effort to elude Union authorities that had issued warrants for them. Texas became a sanctuary state. Many of those who later worked as cowboys on the Texas Trail were these same folks who came out of the aftermath of the Civil War.

Early on, trails took longhorn cattle east into states like Illinois and Missouri. These were essentially feral cattle gathered from the caporal and brush country of Southern Texas and Northern Mexico. As the homesteaders established themselves Missouri, Eastern Kansas and Nebraska and began producing corn and other field crops, the cattle trails moved west to avoid the conflict with the Grainger’s crops and livestock.

Also, as settlement expanded westward, domestic cattle breeds which were not immune to tick-borne diseases such as ‘Texas fever’ caused local producers to resist the movement of feral longhorns that were immune transporters of the illness. The result was the implementation of a quarantine which meant that cattle movement would have to shift to points west.

Other considerations also contributed to cattle trails moving to the west. Northern ranching interest in states such as Montana, South Dakota, and Wyoming needed cattle to stock the plains. Mining interests meant that miners would need a source of meat. As new trails came to lead north out of Texas, new factors arose, such as droughts and floods in addition to resolving conflicts posed by Native American presence through much of the area through which trails passed.

In 1866, the first chuckwagon, requiring 20 oxen to pull it, made its way from Fort Belknap, Texas, to Fort Sumner, N.M., to supply the military, Native Americans, and early settlers with beef. It began with 2,000 cattle, losing somewhere between 300 and 500 head along the way. The early cattle drives of this era included herders, and cowboys with the latter including a third of which that were of Mexican or African descent.

Ownership of cattle being moved was held by wealthy individuals or syndicates which were similar to present-day corporate entities. One such example was the Capitol Syndicate, a group of British investors who owned the XIT, a land developer who name was derived from “ten in Texas”. This group famously received 3.2 million acres of land for $3.2 million the state of Texas used to build the state capitol. By this time, cattle became a prime financial interest for the state of Texas following the Civil War significantly contributing to the state’s economic recovery.

The local region played a huge role in the movement of cattle from the southern plains to northern destinations. Trail wagons were loaded with provisions and equipment at Lusk, Wyo., and Miles City, Mont. In what is now Fall River County, there were longhorn ranches with cattle numbering at or more than 7,000 located on Hat Creek, north of the Cheyenne River near Edgemont, and on Horse Creek near the Sydney-Deadwood Trail. In 1882, Harry Oelrichs purchased and incorporated three ranches. By 1887, he established a slaughterhouse, two adjoining ice houses, and hired three full-time butchers east of the railroad at Oelrichs.

At the height of cattle movement, the numbers passing through Western South Dakota in a few months time were astonishing. It was said during trail season of the early 1880s, a herd of cattle passed through Buffalo Gap every day for three months. Longhorns stretched from Oglala, Neb., to Miles City, Mont. Gus Houser counted 180,000 head going through Hermosa in 1883 taking three months to pass with roughly 2,000 passing each day. Cattle typically moved 5-7 miles per day, taking four months to travel 600 miles. The pace was dictated by the need to allow cattle to move at a rate at which they would continue to graze taking on nutrients and gaining weight as they were moved. Except for periods of drought and heat, cattle were moved exclusively during the day.

At the end of the trail, most cowboys either rode a horse or train back home. Some went on a sight-seeing adventure, as places like Yellowstone became popular post-drive destinations. Most early drives ended at railroad terminals and eventually most cattle came to be transported to northern “finishing ranges” by rail.

Richard Kaan is a past scholar with the South Dakota Humanities Council Speakers Bureau and has BA, BS and MBA degrees from Chadron State College.