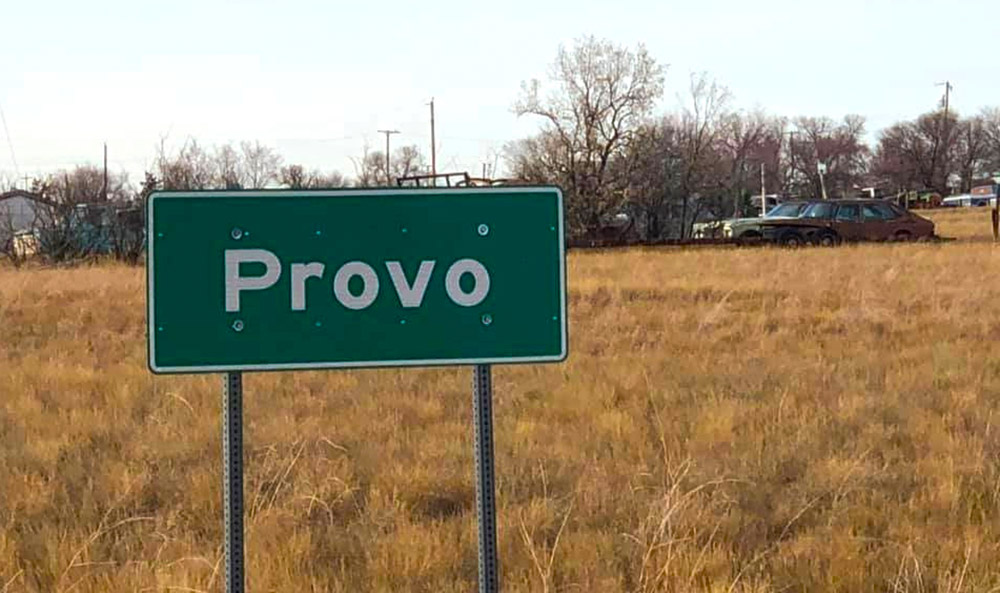 Publisher’s Note: In our newspaper’s ongoing effort to bring our readers informative and entertaining stories about our county’s unique history, this week we are featuring the once bustling community of Provo as the next story in an ongoing series entitled Fall River Foundations.

Provo Township began as a sleepy little slice of land nestled near the Southern Hills border of South Dakota and Nebraska. Yet that peaceful serenity was not to last long as the U.S. Government had plans for Provo and the surrounding areas.

Following on the heels of the Great Depression and the devastation of the dustbowl, the American dream seemed to be but a distant dream for many. Yet the allure of owning a parcel of land that one could call their own was still within reach among the open prairies of the Midwest. Americans and foreigners alike set out for the plains, some homesteading in Provo in hopes of becoming successful ranchers and farmers.

Mr. Coates emigrated from England in 1904 and worked as a blacksmith at his brother’s ranch in Edgemont. In 1907 he homesteaded in Provo. But even his serene prairie life was cut short in the early 1940s as Provo’s peaceful existence came quickly to a halt when the United States began preparations for the possibility of entering into WWII.

Preparations included the expansion of weapon and ammunition storage facilities. Due to the climate of South Dakota’s Southern Black Hills, and the lack of population in the area between Edgemont and Provo, the location was chosen to be the site for the Black Hills Ordinance Depot.

One of the first orders of business that needed to happen when the depot was in the works in January 1942 was the construction of a gravel road between Edgemont and Provo. While much of the land that the road would travel through was county owned, the remaining was privately owned, dispossessing an approximated dozen families in Provo township and Wheeler township.

Construction on the 21,000 acre project began in the spring of 1942, and by August that same year, more than 6,000 workers had flooded the area to work on the project. Seemingly overnight, Provo was transformed into a worker’s tent camp with tent cities dotting the landscape; makeshift housing for those hungry for work.

The first meeting held to discuss incorporation of Provo Township was held July 11, 1942, at the school building at Provo. Overcrowded conditions due to the defense work at the Black Hills Ordinance Depot necessitated the action taken. The committee consisted of store owner Mr. Dunbar, chairman, Mr. W. Cherry and Mr. Coates who homesteaded in Provo in 1904, and was now employed as the Postmaster in Igloo; the depot’s town name derived from the igloo shaped munitions bunkers.

Prior to the building of the depot, the town size was estimated to be less than 100, with 16 students in the local school. Yet members of the committee believed the population had grown to more than 1,000 with the school population now busting at the seams with 200 children. Mr. Rooney, an attorney from Hot Springs, suggested that a census would need to be taken to move forward with incorporation papers, yet a petition was circulated at the meeting asking for 30 signatures of qualified voters. Incorporation was a necessity. Due to lack of incorporation, health and sanitary measures could not be carried out.

While the much needed funds generated by the project were welcomed, the small towns surrounding the ordinance facility were simply not prepared for the quick and massive population growth. With the onset of hundreds of workers settling in or near Provo, the town began to suffer a severe water shortage with the undesirable side effect of health concerns brought on by lack of sanitation.

During the early months that workers descended upon the area, water was brought in by tank car, yet with limited storage, even this proved to be a relatively fruitless endeavor. However, on September 17, 1942, only one month after the township board passed a cistern resolution, a cistern was completed for the town creating a somewhat independent water storage.

According to the health officer on site, Dr. F. Hamilton Redewill, the Army engineers would loan the pipe to make a connection between the cistern and the nearest source of water. If there was not enough pipe to make the connection, Redewill further ensured that bids would be accepted for water hauling.

Word of gainful employment continued to spread like wildfire and hopeful workers walked, drove and rode to get to Provo.

In September 1942, John Taylor Smith took it upon himself to see if the rumors were true and was said to have ridden his bicycle 600 miles to Provo in hopes of working at the depot. The journey took him 9 ½ days carrying approximately 50 pounds of luggage.

Though people continued to flow into the area, water did not.

To address the community’s continued desperate need for a good water supply, town officials of Provo Township held a meeting March 11, 1944, at the local schoolhouse in Edgemont in the hopes of obtaining water from the wells at the depot. The officials offered to pay for the 4,000 feet of needed pipe if the depot would then supply the town with ample water at minimal cost. Yet the state’s attorney general, H. M. Lewis, advised that the Provo Township board was without authority to enter a contract with the federal government. This contention would continue for generations.

After WWII, the number of employees at Igloo declined to approximately 700 but grew to approximately 1,300 when America became embroiled in the Korean War. However, this time the population boom did not have the same effect on little Provo as the initial boost in the early 1940s, as the town of Igloo had been self sustaining for years. During peacetime, the site was used for bomb disposal and ordinance parts salvage with the depot site seeing its final closure in 1967 causing a disastrous economic ripple effect in the surrounding communities.