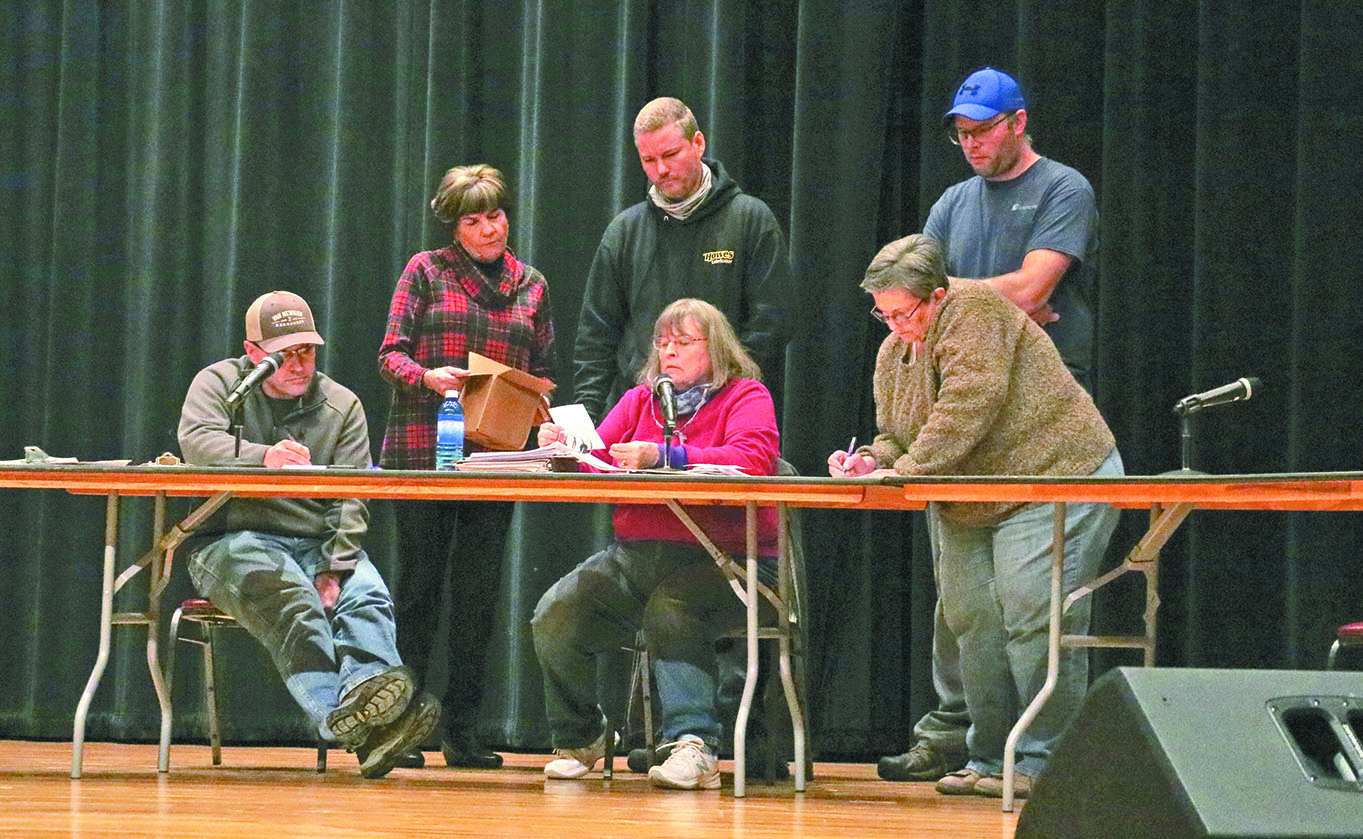 During an election held in the Mueller Center Theater on Jan. 28, Hot Springs Rural Fire District Treasurer Karen Meston, center, reads aloud the board member votes on a ballot as Secretary Susan Stolarcek makes tally marks on a piece of paper to record the vote. According to Meston, the board typically has to “twist arms” to convince people to fill one of the seven two-year board position, but this time there were nine people nominated for the four vacant positions. Also pictured, from left, is board member Scott Harkless (seated) audience members Bonnie Bernard and Ryan Walz who served as witnesses to the canvass, and previous board member Josh Schuh.

HOT SPRINGS – Normal attendance at Hot Springs Rural Fire District quarterly meetings is typically less than 10 people, including seven board members and a couple others, usually with the Hot Springs Volunteer Fire Department, which contracts with the district to provide fire protection.

However, at last Thursday night’s quarterly meeting, held Jan. 28 at the Mueller Center Theater and which also served as the annual meeting, about 100 people were in the audience as the topic of speeding up response time to fires was discussed – particularly to the growing number of homes near Angostura – along with an election to fill four of the seven board seats.

Following the conclusion of the election, in which a total of 73 ballots were counted, current board members Tom Inmann, Scott Harkless and Gary Romey were re-elected to two-year seats, while newcomer Mark Siebenthal replaced incumbent Josh Schuh, who finished fifth in the election.

A total of nine people were nominated to fill those four seats, which included the five aforementioned nominees, along with Jim Goeman, Wendell Hertell, Kevin Fees and Misti Cantrell. Siebenthal is a 10-year, permanent resident of one of the Angostura housing developments who works for Fall River Rural Water.

Prior to the board election taking place towards the end of the two-hour meeting, Board Treasurer Karen Meston opened up the meeting for comments from the floor, while anticipating several in regards to the Angostura housing development.

At the board’s most recent quarterly meeting in October, Goeman, a resident of Long’s Lakeview Estates near Angostura, attended while representing his neighbors. He said, at that meeting, they would like to have a grassfire or “brush truck” stored closer to their homes to allow for quicker response time to fires in their area of the district. He then also offered to have up to 10 of their residents to serve as basic-trained volunteers to operate the truck and do initial attack on grass fires, until the better-trained Hot Springs Volunteer Fire Department members can arrive.

Goeman’s comments were based on an incident experienced by he and his neighbors on the Fourth of July weekend this past summer, when a resident’s large shop/garage was lost due to a fire caused by fireworks. Several neighbors attempted to put out the fire on their own using hoses and tools, but were unable to stop it prior to reaching the structure and the HSVFD arriving.

At that October meeting, it was pointed out by Goeman that there were a total of 300 homes in and around Angostura Road, which starts at Angostura Den along Hwy. 18/385 and proceeds south to the State Park. Goeman said 60 of those homes have permanent residents. In addition to the private housing, Goeman said there are also 163 campsites and eight cabins inside the state park which could also be served by having a fire truck permanently stored in the area.

At last week’s Fire District Annual Meeting, Donna March, who lives on a ranch along Angostura Road, was the first audience member to speak. She said she understood many people were at the meeting from the Angostura area housing developments in order to vote in new board members to represent their interests. March then warned them that voting out experienced board members like Gary Romey or Scott Harkless would need be in everyone’s best interests.

Audience member Kimberly Traphagen, a longtime permanent Angostura Lake resident, then spoke and expressed the need to have community representation on the board that represents not only Angostura but the entire district, which geographically is quite large and stretches as far north to parts of Argyle Road and as far south as both sides of Angostura, including Shep’s Canyon.

Goeman also spoke and restated his and his neighbors’ desire to have a fire truck permanently stored in their neighborhood which they could utilize for initial attack on grassfires. He acknowledge the need for training and went on to say that they had already taken it upon themselves to be better prepared. He and some neighbors, he said, had already purchased a truck equipped with a water tank and firefighting equipment.

Area rancher Tony March also spoke and said how the ranching community around Angostura has also been trying to get a fire truck stationed closer to the area for many years, and suggested having one stored at the Hot Springs Municipal Airport.

Hot Springs Fire Chief Dar Coy spoke and explained how their department’s by-law state that, for a truck to go out to fight a fire, it must have two trained firefighters on board in full PPEs (Personal Protective Equipment). He said in order for one of their trucks to be utilized on any fire at Angostura, or any where else, that must be the case.

“If we can’t do it right, we can’t do it,” Coy said, while also recommending that representatives from the Angostura housing developments should come to their fire meetings to work out the details of how something could be arranged.

Board member Gary Romey, who also ranches in this same area, said he has had a longstanding belief that the Hot Springs Rural Fire District could be better served by having various substations located throughout the area with fire trucks permanently stored. He said that Niobrara County in eastern Wyoming has 26 fire trucks and Harding County in northwestern South Dakota has 56 fire trucks, all scattered throughout their district, all with the purpose to provide quicker response times to the more remote areas.

“The bigger the district is, the more people coming in here, the more you’re going to need response time,” Romey said, while adding that the people who utilize those remotely scattered trucks are “trained firemen. They’re ranchers and members of the fire department.”

“There’s ways of doing it,” he added. “You have to be trained. Need to be part of the fire department, but a substation in an area that needs more protection would be the way to do it.”

Jobie Dryden, who is a member of the Oelrichs Fire Department but lives and ranches on land in the Hot Springs Rural Fire District along Horsehead Creek, asked Coy what type of additional training would be needed in order to fight a fire at Angostura.

Coy stated that unless it’s a state-run fire which does compensates individuals financially for fighting the fire – which also comes with it some additional requirements including a physical fitness test – the basic firefighting training is enough.

“But for initial attack, and you don’t mind being there until the state or we get there and tell you to go home, as long as you got PPE, you’re welcome on the fire,” Coy said, while adding their number one priority is safety.

“Well, I think that is kind of the point of what we’re making, is just having something available,” said Dryden, who then said they are getting more and more capable people in that area around Angostura who would be able to put together a good crew, until the more experienced and better-equipped Hot Springs VFD units can arrive.

Coy then restated what he said earlier and invited Dryden, or any other interested parties, to come to a fire meeting and discuss what is possible. He said meetings are held at the Hot Springs Fire Hall the second Tuesday of each month, beginning at 7 p.m.

Later in the meeting, Coy expressed how he feels that since the City of Hot Springs recently annexed the Hot Springs Airport that they would probably be receptive to putting a permanent fire truck there to provide quicker response time.

Throughout the open discussion of the topic amongst the audience, board and the Hot Springs VFD, the Board Treasurer Karen Meston served as the moderator. She also suggested a meeting between all parties with representation of the Angostura area residents, the HSVFD and the board to work out details.

Following the meeting, Meston said she was pleased with the discussion and felt progress had been made since that meeting is now in the works. While she feels confident the issue can get resolved, Meston said one of the concerns however in trying to come up with a solution is that there is very little documentation to prove, or disprove, there is a response time problem.

“We don’t have statistics to tell us if the response time to fires there (Angostura) is any worse than it is to anywhere else in our district,” Meston said, while alluding to the fact that the district is very large and that there could also be a need to address these same concerns elsewhere.

Representing the Angostura homeowners, Goeman too was pleased with the discussion at the meeting and was making plans to attend an upcoming fire meeting to explore the topic further with the HSVFD. He however said his group was opposed to putting a fire truck at the airport because access to it would be limited and more difficult. His group’s hope is that one can be stored in one of the resident’s heated shops/garages that is already built and currently available.

“We all seem to be working in the right direction” Goeman said. “We’ve got people who want to get the training and work with the Hot Springs Volunteer Fire Department with safety as our No. 1 priority.”