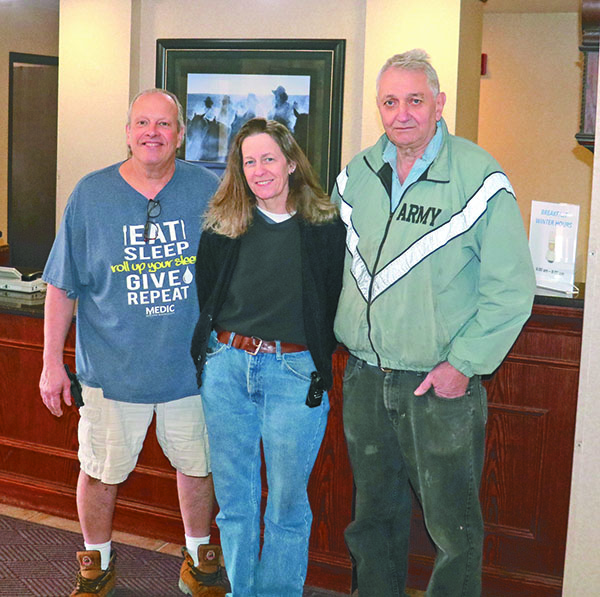 HOT SPRINGS – For people who know Big Time Pizza owner Robert Davis, he’s always trying to think of new ways to serve his customers and to also give back to the community.

Despite his pizza restaurant currently being closed for the season while he and his wife Mary seek a new owner to take over its operation, Robert has continued to keep busy upgrading his building and connecting with other local businesses.

Recently, he joined forces with the managers of the Stay USA Hotel & Suites – Steve and Beverly Frank – to come up with a fundraising concept to help Boys & Girls of Hot Springs, since they were unable to hold their annual Wine & Wreaths fundraiser in November.

This new event is called “Three Days of Love” and will coincide with Valentine’s Weekend on Friday, Saturday and Sunday, Feb. 12-14, in the backside of Stay USA’s swimming pool annex.

Through his new found friendship with the Franks, Davis learned that the motel had an abundance of recently-purchased liquidated motel furniture which they had planned to put in their Stay USA rooms. However, when the shipment arrived, it was damaged to the point which it could not be utilized as they hoped.

Items include headboards, end tables, desks and lamps, along with a number of other miscellaneous furniture items, with many things having heavy granite tops. While a lot of the items are damaged, Davis said the wood can easily be cut and repurposed into a wide range of things, from shelves to planters to any number of items and craft projects.

In addition to the motel furniture that will be available to view and purchase on Feb. 12-14, the public is also invited to donate their own gently used items to be sold, with those proceeds also going to the Boys & Girls Club. Anyone wanting to donate items can call the Franks at their motel at 745-4411 to arrange a drop-off time. If the item however does not sell, the donor is responsible for picking it back up.

The Franks moved to Hot Springs to manage the motel in 2019. Steve previously worked as a Registered Nurse in the ER/Urgent Care for the Federal Government and Beverly worked in finance for over 30 years.

“We came here because of the wide-open spaces and sheer beauty of the Black Hills,” Steve said. “Both of us are very community-oriented and raise our two boys (9 and 11) with the same spirit.”

Beverly and their boys are active with the local Boy Scout troop and Beverly is a BSA trained leader.

As managers of the Stay USA, which Steve said was an American-owned hotel, he serves General Manager while Beverly works as the Front-end Manager/Account.

“We strive to have this hotel also active in the community,” Steve added. “We support and work with LiveTicket for the schools, donate rooms for the Mammoth site raffle. We strongly believe that people can make a huge difference if they have the right mindset, drive and empathy.”