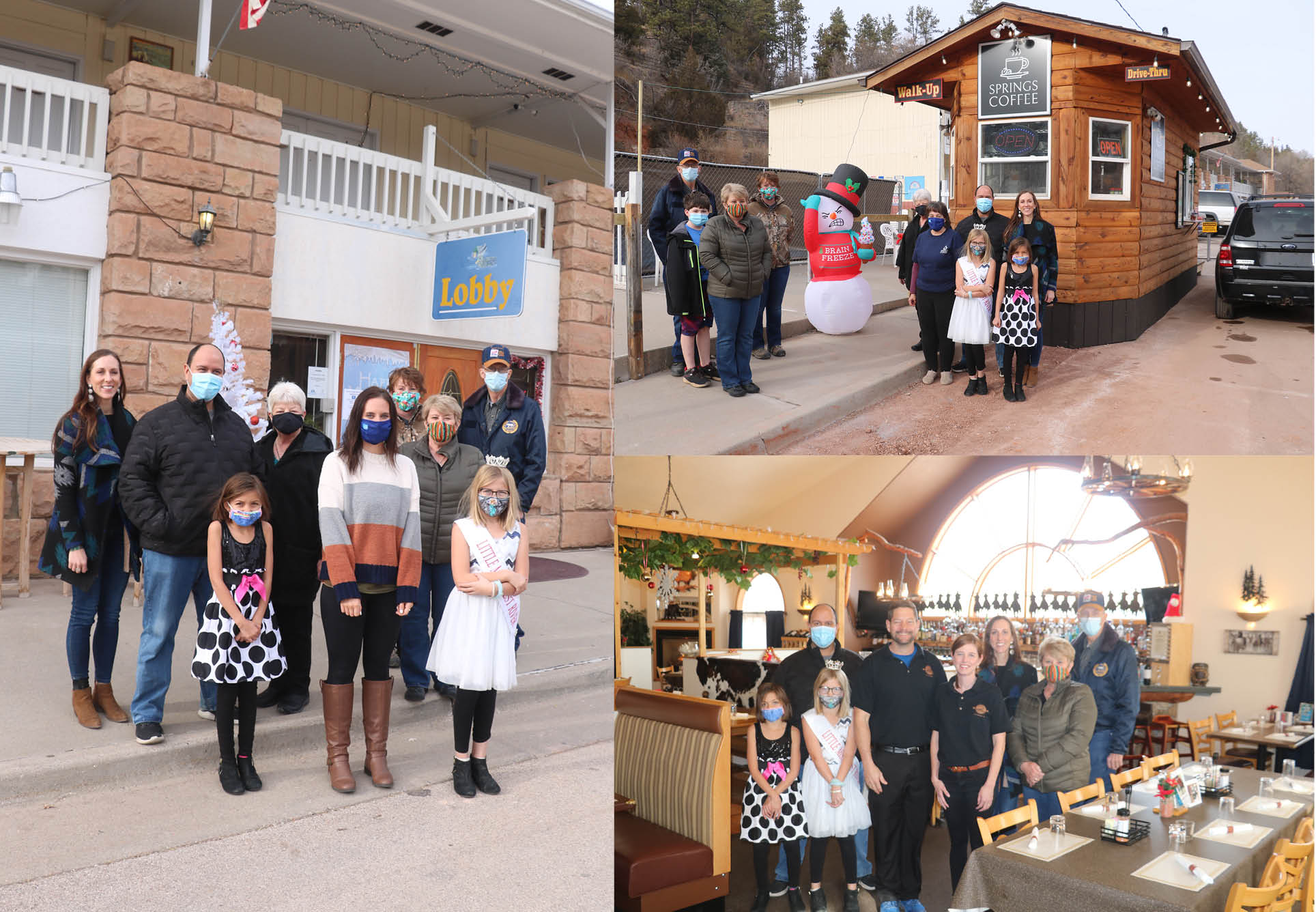 Back in December, the Hot Springs Area Chamber of Commerce Ambassadors went around to three businesses each owned by the Wetzel family. On left is the family’s newest venture, America’s Best Value Inn, which they purchased in September. Pictured in the front/center is Motel Manager Schuyler Wetzel. On the top right is Springs Coffee, which is the former Coffee Kiosk located at Simco Business Plaza, but now located at the motel. Pictured in the group on the right is Vicky Wetzel. And, in the photo on the bottom right is Woolly’s Grill and Cellar, owned by the Wetzels but managed by the Van Bibber family. Dan and Rachael Van Bibber are pictured in the center. Chamber Ambassadors pictured in the photos are Justin Gausman, Lindsey Luper, Randy Meyers, Kris Hansen, Jeanie Tiff, Little Miss West River Alexis Uehling-Mason and her sister Zoey Uehling-Mason.

HOT SPRINGS – A family long-entrenched in the Hot Springs restaurant business for many years, and another family who moved here more recently, have joined forces to help ensure the local dining out options this winter are more plentiful.

The Wetzel family, which includes Phil and Vicky and their children PJ and Schuyler, have owned and operated Woolly’s since 2008, when it was first located in the convention building next to Stay USA Suites along the Hwy 18 truck-pass. The family moved here in 2005 from California and first came to work for Vicky’s uncle who at the time owned and operated Scotty’s Roundup, which was located in what is now Woolly’s Grill and Cellar. The Wetzels moved the Woolly’s restaurant into its current building in 2011.

Prior to opening up their first Woolly’s restaurant in 2008, Vicky began serving coffee and opened the Hot Springs Coffee Kiosk in 2006, and at one time had two locations, including one at Maverick Junction along with one in town. She operated both until downsizing to just one location near the Simco Business Plaza downtown. It was sold a couple of different times, with Vicky taking it back over once again a few years ago, but then selling it one more time.

After 16 years in the restaurant business, the Wetzel family this past summer decided it was time to retire from that and try something new. So in September 2020, the family purchased the America’s Best Value Inn motel, located at 602 Sulphur Springs Street. They then also purchased back their former coffee kiosk and moved it to the motel.

“It’s just my baby,” said Vicky, as she recalled how her original coffee kiosk had been bought and sold numerous times, but found its way back to her again at their new motel.

Vicky added that owning a motel had not previously been one of the plans or goals, but after the opportunity was presented to them by their son PJ, they began looking into the history of that location and the previous historic motel that was once there, they fell in love with the idea.

While attempting to sell their Woolly’s restaurant, the Wetzel’s began discussing the idea of instead hiring another family to take over operations.

Enter in the Van Bibber family.

Dan and Rachael Van Bibber moved with their five children to Hot Springs from Nebraska a couple years ago, after Dan was hired by the Hot Springs School District to teach middle school math.

In addition to teaching, both he and his wife also worked for the Wetzels in the summertime as bartender and waitress. Their three oldest children also worked part-time at the restaurant as well.

Wanting to have another family run the restaurant like they did themselves, the Wetzels began teaching the Van Bibbers more about the business so that they could soon take over management.

Seeing the opportunity to serve their new community in a different manner, the Van Bibbers agreed to take over the restaurant late last year. After 20 years as an educator, Dan then also retired from teaching at the end of the semester this past December.

So far, everyone involved is very pleased with the way things are going in all three aspects of the two families’ new ventures, which together they refer to themselves as “The VanWetzel Team.”

Schuyler Wetzel, who is also part of the full family ownership, is taking on management of the motel, which features 32 rooms, along with three log cabins which are available only in the summer months. They are currently remodeling a quarter of the rooms, including four upstairs and four downstairs.

Despite currently having an outdoor pool, the Wetzels’ plan to fill in that area and instead encourage their guests to instead visit places in town like Evans Plunge or the nearby Moccasin Springs spa to enjoy the local warm water.

With the elimination of the pool, that area will then be converted to an outdoor courtyard that will have a firepit and provide seating for the Springs Coffee kiosk, located in the nearby parking lot. They have recently applied for a wine and beer license to serve alcoholic beverages on-site as well.

The Wetzel’s coffee kiosk is where you’ll most often find Vicky, serving up not only your favorite coffee beverages, smoothies and juices, but also food items with a Mexican focus including a variety of breakfast burritos. Some of the food items are prepared on-site, while many others are made at Woolly’s and brought down fresh.

The past few years, Woolly’s had shut down for the winter as the Wetzel’s took off to spend leisure time with their family. With the Van Bibber’s taking over management, the restaurant will now be open year-round, but with limited days of operation in the winter.

Currently, they are open Thursday, Friday and Saturdays from 3:30 p.m. to 9 p.m., but they have plans to expand those hours and days of operation in April.

Phil and P.J. Wetzel still operate the kitchen and prepare the same quality of food which diners of Woolly’s have always loved over the years, while five members of the Van Bibber family – including Dan, Rachael, Mason, Hayden and Peyton – take care of the guests in the upstairs dining room.

Their menu can be viewed at their website www.woollys.com, or you can also look them up on Facebook or call 745-6414.