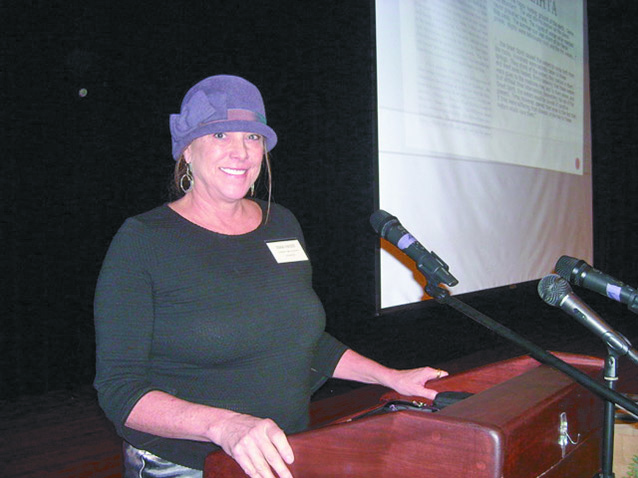 HOT SPRINGS – Proving once again that this region is replete with history and people are hungry to learn about it, the 16th annual Focus on Fall River History Conference, organized by the Pioneer Museum, was held this past Saturday, Jan. 16 at the Mueller Center. A good-sized crowd gathered, including attendees from Rapid City, Custer, Wheatland, Wyo., and St. Louis, Mo. DVDs of the program will be available from the museum later in the year.

Hot Springs’ own Kara Hagen, who brought the Flat Iron property back to life several years ago, spoke of her latest renovation project, the Moccasin Springs Natural Mineral Spa.

The spring had been closed off since 1963. She used part of the original structure and did a rebuild on the rest, then constructed a beautiful facility for a spa, complete with an intimate dining experience, Buffalo Dreamer. Please refer to www.moccasinsprings.com for complete information on this gorgeous stepping stone to reclaiming Hot Springs as a spa town. Kara assembled a spiral-bound book on the history of Moccasin Springs from historical Hot Springs’ newspapers and ads, memories, vintage and current photos. The book will be available at the spa when they open in February and from the Pioneer Museum in the spring.

Influential community members are always a good subject. The Mueller family is one such entity. Marcus Heerdt, photographer and writer for the Fall River County Herald-Star, has a degree in history and an avid interest in jumping right into his new community’s history.

The author of the front page newspaper articles appearing under the headline, “Naming Writes,” features history on local places that are named for historical residents. The recent article he wrote on the Mueller family was a jump-off point for this presentation. This family continues to influence Hot Springs as the original idea for the suspended bridge along Fall River came from the master’s thesis by Jim Mueller, class of 1970 HSHS, and Kim Williams, when they were completing graduate school in architecture at the University of Kansas in 1976.

Dan Byrne, archeologist with the S.D. State Historical Society archeologist office in Rapid City, presented an overview of the excavation at Cascade during 1996-1997, when he helped dig up the remains of the Cascade Bathhouse. Twenty-three years after the dig, the written report and fascinating history of Cascade, was finally completed in 2020. Copies of The Water Cure can be purchased from The Pioneer Museum or through the Archeology Research Center in Rapid City at the number 605-394-1936. The Hot Springs Public Library has a reading copy in the Helen Magee Heritage Room.

Terry Sandstrom, Wheatland, Wyo., gave a brief history of Fort Robinson, Neb., including the U.S. Cavalry and remount station, the K-9 corps, Civilian Conservation Corps camp and POW camp. He highly recommended a book by Arcadia Publishing titled Fort Robinson by Ephriam D. Dickson III, who was a former guide at the fort. Sandstrom said, “This book is the most comprehensive history accompanied by over 200 historic photos of the fort.”

Karl Bochert passed around a large, old railroad wrench as he told how the tool was used and that it came from Nebraska originally. An amazing raconteur, Bochert is able to weave interesting information on any subject of history. His knowledge was heavily influenced by Helen Magee, the historian of Hot Springs. Her history collection has its own room in the library and can be accessed online through hotspringslibrary.com. On the first page, scroll down to the green link “Search the Collection.” The world of area history awaits your searches.

The United Churches of Hot Springs is the oldest federated church west of the Mississippi River, as it was 100 years old in December 2020, according to Gerald Collogan. A federated church is made up of at least two denominations and in the case of the United Churches it is three: United Methodist, Presbyterian and American Baptist. Among the many well-known members were US Senator Francis Case and his brother Leland, both of whom were publishers of the Hot Springs Star and their sisters Joyce (Case) Wilson, wife of attorney C.A. Wilson, and Carol Case Goddard, a primary benefactor of the Pioneer Museum.

When a historical entity from Hot Springs applies for an Outside of Deadwood Grant, applicants are asked to give an example of a connection between Deadwood and Hot Springs. Mike Runge, archivist for the city of Deadwood, listed men who started their Black Hills’ lives at Deadwood during the gold rush of the late 1870s, and within a brief time, moved south in order to build up Hot Springs. Runge said, “In the fall of 1881, five men formed the Hot Springs Town-Site Company. These men, Rudolphus D. Jennings, an internal revenue collector, Alexander S. Stewart, a receiver at the United States land office and a physician, Ervin G. Dudley, a sawmill owner, L. R. Graves, president of the First National Bank of Deadwood, and Fred T. Evans, freighter/transportation company owner, saw the potential for Hot Springs.

The final speaker was Frank Garcia of the World Fossil Finder Museum, located next to Pizza Hut, in Hot Springs. As a Navy veteran he stressed that veterans and law enforcement and their spouses are admitted free any day. He invited the public to watch a one hour YouTube video “Sunrise at Bone Valley,” that showcases one of his digs and gives an overview of finding fossils.