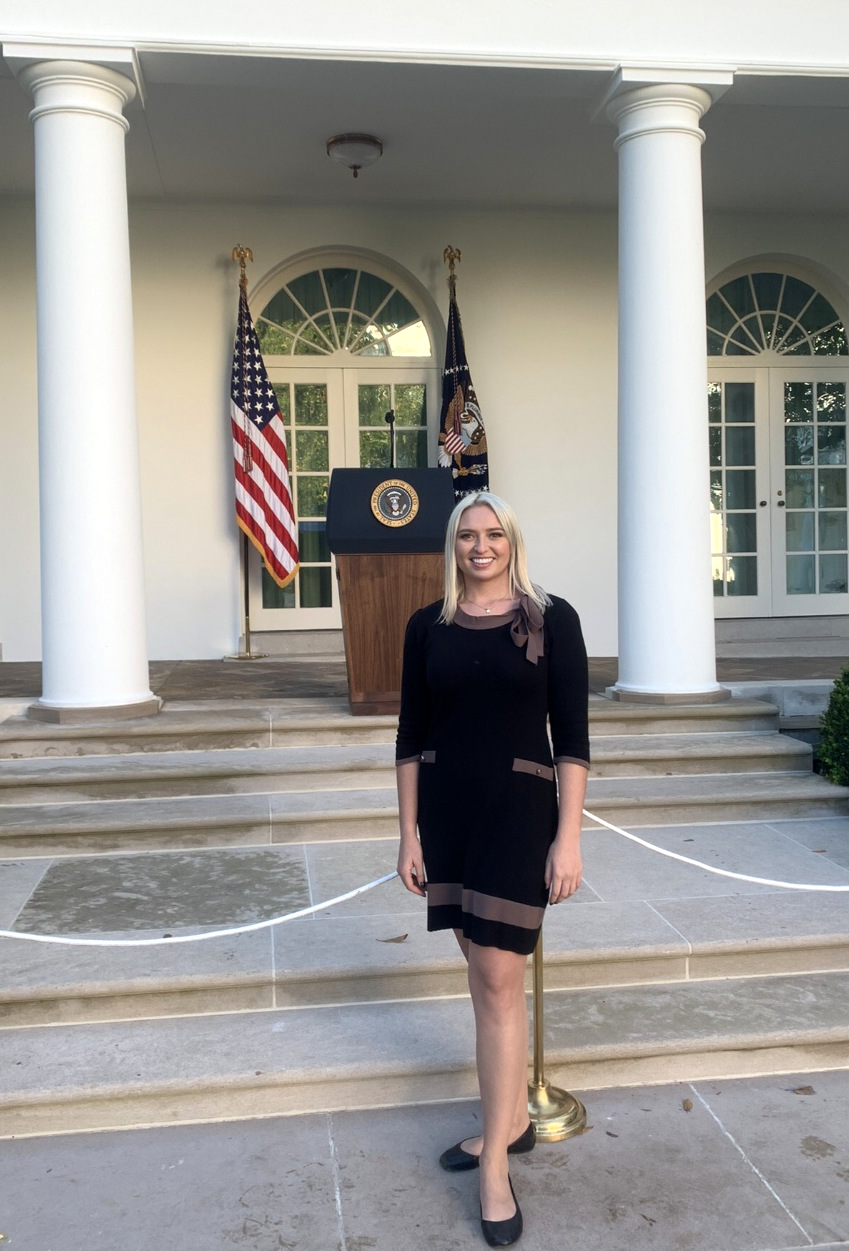 Amber Hulse, Miss South Dakota and 2017 Hot Springs High School alumni served as an intern to the Intergovernmental Affairs office in Washington DC. Pictured here on the South Portico on the South lawn of the White House.

“It was a personal decision to apply for the internship program,” explained Hulse, a political science major, “but my experience serving as Miss South Dakota helped me throughout the process.”

Hulse applied for the intern position in June of 2019. By September that year she had passed through a thorough selection and vetting process and was selected for the position. “It was a long journey and a lot of hard work,” she said, but definitely a positive stepping stone in her life’s path.

“It is wonderful to come from such a great town like Hot Springs and one day it is my dream goal to represent South Dakota in Washington DC,” she said.

In May 2021 she will have earned her political science degree from University of South Dakota. With that degree under her belt she plans to further her education by earning a law degree so that she can better “serve South Dakota”.

While interning in Washington DC with the Intergovernmental Affairs Office Hulse learned the many working gears that make the Federal government function.

“The Intergovernmental Affairs Office is often referred to as ‘the front door’ to the White House,” explained Hulse, as the office is the conduit between local and state officials and the White House. “It’s a communication center between federal and local agencies with many, many moving parts. It’s a very busy office.”

While much of what she worked on while serving as an intern is not for public consumption she was adamant that there are an abundant amount of people working for Americans.

“I always tell people when you think of the Federal government its almost like the Wizard of Oz, the man behind the green curtain, but as an intern I was showed the structure of the federal government and the people within. These are real people trying to do a good job, there are really good people working for you in Washington DC.; real people doing really hard work for the American people day in and day out.”

Hulse was also surprised by the common misconception that there is limited diversity among those who work in power positions within the White House.

“I think the national narrative in the media is that the current administration doesn’t empower people of different backgrounds, race, religion, and sexuality. Yet the amount of people I witnessed and worked with from unrepresented backgrounds was really incredible,” she said. “These unrepresented people were highly empowered in their roles; this inspired me to continue to strive for my goals.”

Her most inspiring mentor is South Dakota Governor Kristi Noem.

“She is a perfect testament to someone who came from a ‘normal’ South Dakota life and worked hard to serve our state.”

“Regardless of whether you agree with her political positions or what she has accomplished, she has proven that someone does not have to come from wealth or a political family to make a difference and that we really do have real people that run for office with the goal to help others.”

Hulse hopes the youth of today will push the envelope and follow their dreams too.

“One of my favorite sayings is ‘when someone says you can’t, then do it and take pictures’,” she said.

“So many people tell you in your life that ‘you can’t’, especially when you come from an unrepresented background. I was a nerdy little band girl shooting for the stars. I got a little backlash for dreaming, but I listened to my heart and I followed my passion and I hope I blazed a trail for those who think they ‘can’t’. If I can do it, you can too. The world might be looking for someone just like you,” she said.