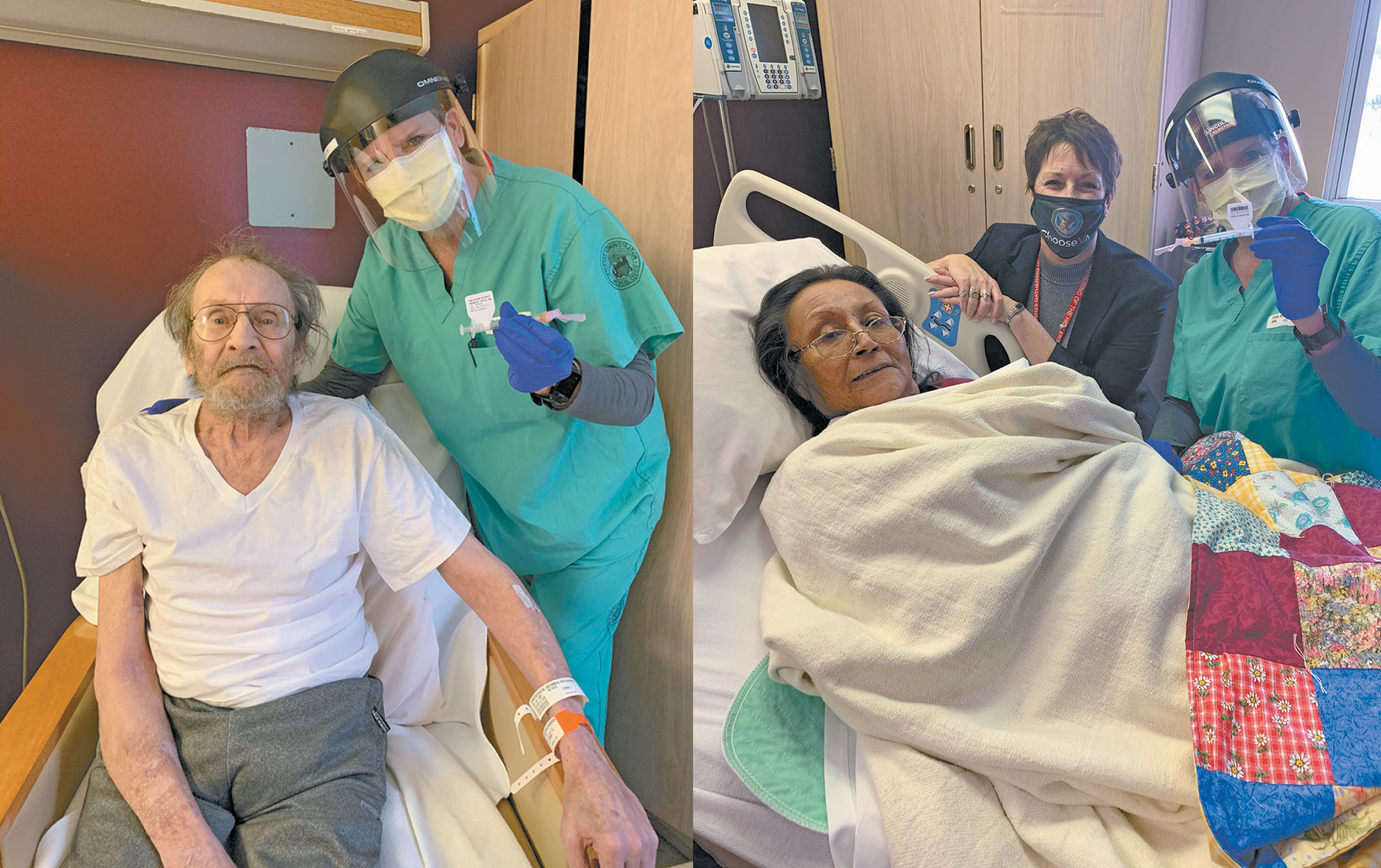 LEFT: The first Veteran at the Hot Springs VA Medical Center to receive the Moderna COVID-19 vaccine was Dennis Frederick, who is pictured here with Debra Mangold, RN.

RIGHT: The very-first female Veteran to receive the vaccine in the entire VA Black Hills Healthcare System was Ladean Bennett, who got her shot in Hot Springs last week on Dec. 31, 2020. She is pictured her with  VABHHCS Director Sandra Horsman and Debra Mangold, RN.

That day was the first in which the vaccinations became available in Hot Springs, after first coming to Fort Meade in Sturgis earlier in the week. A total of 400 doses of the Moderna vaccine has so far been allocated for the Hot Springs VA with more on the way each week.

According to VA Black Hills Healthcare System (VABHHCS) Chief of Pharmacy Dr. Amy Doten, who is overseeing the vaccination roll out, the plan is to administer 10 percent of the Hot Springs VA’s doses per day, which equates to 20 patients and 20 staff members. The slow roll out in this manner was in-part designed to ensure large groups of medical staff were not taken out of service, should they have a negative reaction.

Sandra Horsman, Director of the VABHHCS, said a lot of thought went into the plan to roll out the vaccine and she commended both Dr. Doten and Chief of Staff Dr. Brian Bowers for their work in designing the plan.

An early part of the plan to administer the vaccine was gaining input from staff to see how many wanted to receive it. Horsman said that so far 58 percent of  VABHHCS staff have said they want it, but that number is rising as people reconsider the option while learning more about the vaccine’s safety and effectiveness, she said.

Brenda Spitzer, a Registered Nurse at the Hot Springs VA, was the first staff member to receive the vaccine on Dec. 31. She said she had no hesitation whatsoever in choosing to get the vaccine and felt it was the right thing to do to ensure the safety of the veterans she cares for and the others in which she comes in contact. Part of Spitzer’s confidence in vaccines is the fact that she has worked as a nurse in many other countries, including Italy, Africa and Thailland, which required her to receive several vaccines in order to travel and work there.

“I’ve never had any issue before with any of my other vaccines, and don’t expect to have one with this vaccine either,” she said, just a few minutes prior to receiving the Moderna vaccine last week.

The first Hot Springs VA Veteran to receive the Moderna vaccine on Dec. 31 was Dennis Richard Frederick, who is a Vietnam Vet and served in the U.S. Army from 1968-1971. He said he has been been receiving in-patient at the CLC for the past 48 days and said he looks forward to the time when he’ll be able to go back to his home at the Evans Apartments.

He said he was informed the day before that he would be receiving the vaccine and was pleased to hear so, and also had no hesitation in deciding to receive it.

“It was painless,” he exclaimed, just a few minutes after receiving his shot.

Horsman said the Moderna vaccines becoming available at the Hot Springs VA on Dec. 31, 2020, was good timing as it was also a symbolic way of putting a very difficult 2020 behind them and look forward to getting back to Veterans’ other important medical needs.

“Like our Veterans who have gone to war, this too has been a war with no end in sight,” Horsman said. “This vaccine now provides some light at the end of the tunnel.”

Horsman described how the COVID-19 pandemic has been very emotional for VA employees, especially at VA Black Hills, where she said the staff’s relationship with their patients can be described as a family. She commended how the Hot Springs VA staff, in particular, had stepped up without hesitation and answered the call.

Once all of the CLC residents and Hot Springs VA front line medical workers who have indicated they want the vaccine have received it, Dr. Doten said all of the other veterans and VA staff and facility workers will be given their opportunity to receive it as well. Ongoing communication is being planned with both staff and area veterans being served by the Hot Springs VA to ensure everyone wanting the vaccine will be notified and scheduled in a timely manner, she said.

According to Public Affairs Officer Teresa Forbes, VA Black Hills is following recommendations on risk stratification based on guidance from the independent Advisory Committee on Immunization Practices (ACIP), the Center for Disease Control and Prevention (CDC).

Following last week’s initial phase of vaccinations, Forbes said VA Black Hills will be reaching out to Veterans 75 years and older and high risk Veterans who are receiving care such as hemodialysis and chemotherapy.

“As more supply becomes available, we will gradually open up vaccinations to additional priority groups,” she said. “As we follow national guidance of phased priority groups, Veterans will receive a letter telling them when they are eligible and how to make an appointment.”