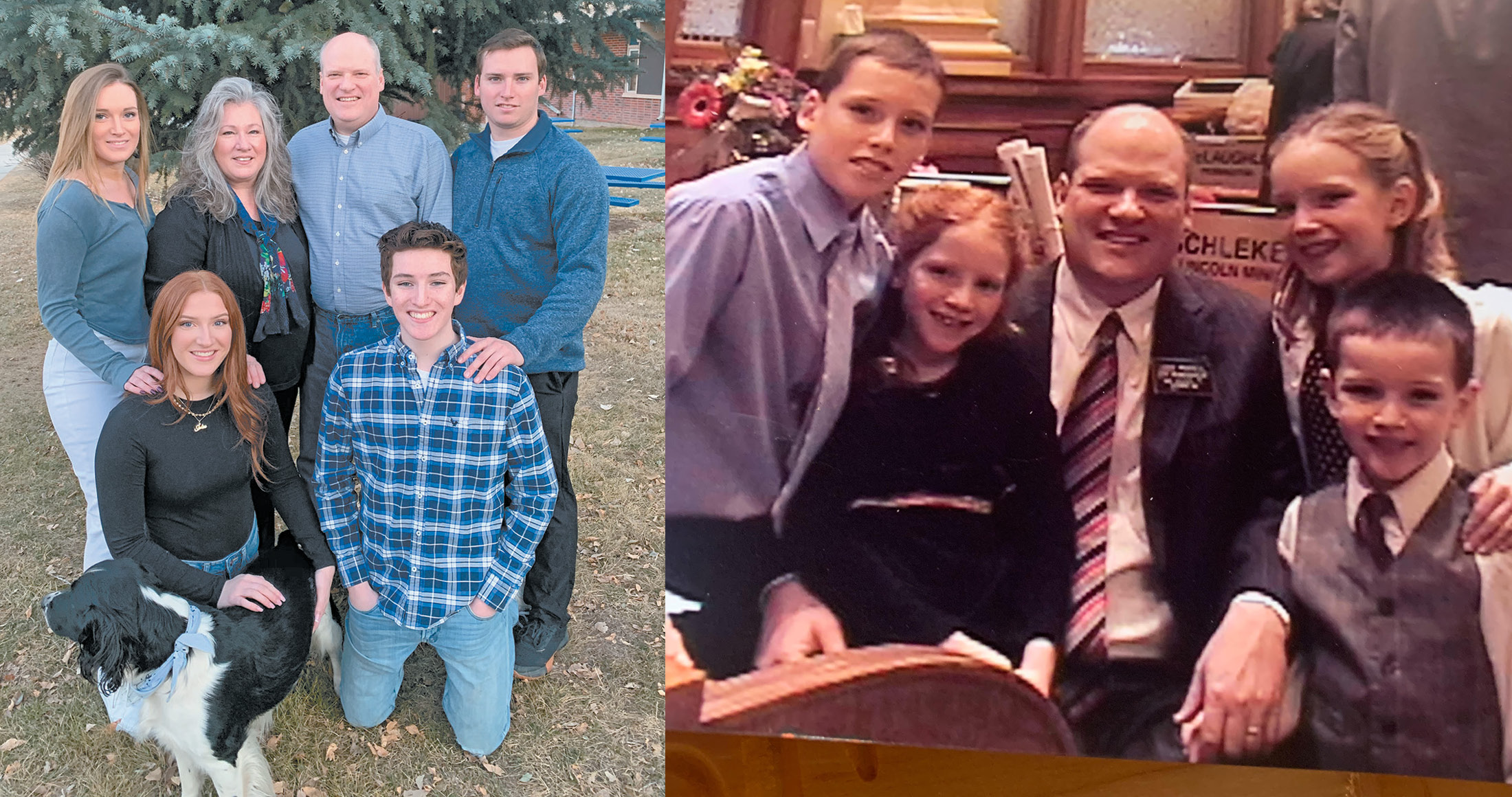 LEFT: Lance and Starla Russell pose for a recent photo with their four children, including (clockwise from left), Madison, Grant, Warren and Julia. RIGHT: Lance Russell poses with his family during his swearing in as a state representative in 2009 in Pierre.

EDGEMONT – Edgemont native Lance Russell might also be known as Destiny’s Child. From grade school through high school he was seated next to Starla Smith, the girl he would eventually marry, thanks to last names that were close together alphabetically. Russell credits the ultra-familiarity that resulted from years of close proximity in the classroom for sealing the deal that became marriage eight years after they graduated.

“Whether it was the lunch line or a row of desks in one of our classes, she was right behind me,” recalls Russell.

Today, the couple have four children, the eldest of them is son Grant who graduated from the S.D. School of Mines & Technology where he was a kicker on the football team and just recently accepted a job in Denver. The next two, daughters Madison and Julia, are working toward degrees at Black Hills State University. The youngest, Warren, is a sophomore at Hot Springs High School.

And then there was another “latest in a long line of” category that he just didn’t seem likely to escape. Russell’s great grandfather, Frank Russell, was a mayor of Edgemont back in the early 1920s, a position he held in addition to managing a lumber yard. His grandfather who left the area for a period during his younger years returned to become a judge late in his career in the 1960s. His son David (Lance’s father) became an attorney, with Lance following in succession and third in a row to attend the University of South Dakota Law School.

So it should come as little surprise to anyone that Lance R. Russell would follow in the footsteps of familiarity and pursue a law degree, which he completed at the University of South Dakota in 1999. After graduating, he went to work as a law clerk for judges in the 8th Judicial Circuit headquartered in Deadwood.

In less than a year, he was offered the opportunity to work for the Lawrence County State’s Attorney as a Deputy State’s Attorney, which he accepted. Things continued to happen quickly for Russell as in June of 2000, he won the Republican Primary for the office of Fall River County State’s Attorney. The following November, he defeated two-term incumbent Pat Ginsbach with 72 percent of the vote, just a year removed from law school.

Russell won re-election in 2004. In 2006 he decided to run for 7th Circuit Court Judge, a contest he narrowly lost to A.T. Fuller a 30-year veteran of the bench. In the final year of his term as State’s Attorney, Russell ran successfully as a candidate for the South Dakota House of Representatives for District 30, a position he was re-elected to for three more terms. Then in 2016, he was elected to the State Senate with his second term ending this past December.

When asked about what he found most surprising in his first stint at public service in Fall River County as State’s Attorney, Russell indicated that the level of criminal activity in the county was higher than that of jurisdictions of a similar size, and he found that municipal officials seemed to lack transparency. He believes that local governments now are more transparent and do a better job of serving the people.

The biggest challenge Russell believes he faces in his second stint as State’s Attorney is collecting restitution for victims and discouraging repeat offenders due to changes in criminal prosecution made during the Daugaard Administration.

During his years in the state legislature, Russell served on the Judiciary Committee while in the House and he was the Chairman for the Judiciary Committee for both of his Senate terms. Russell says he is most proud of defending Constitutional rights and individual liberties and was part of the effort to kill proposed legislation that could have curtailed those rights.

When asked about his goals for the next four years, Russell responded, “To collect as much restitution as possible for folks and keep communities within the county as safe as possible.”