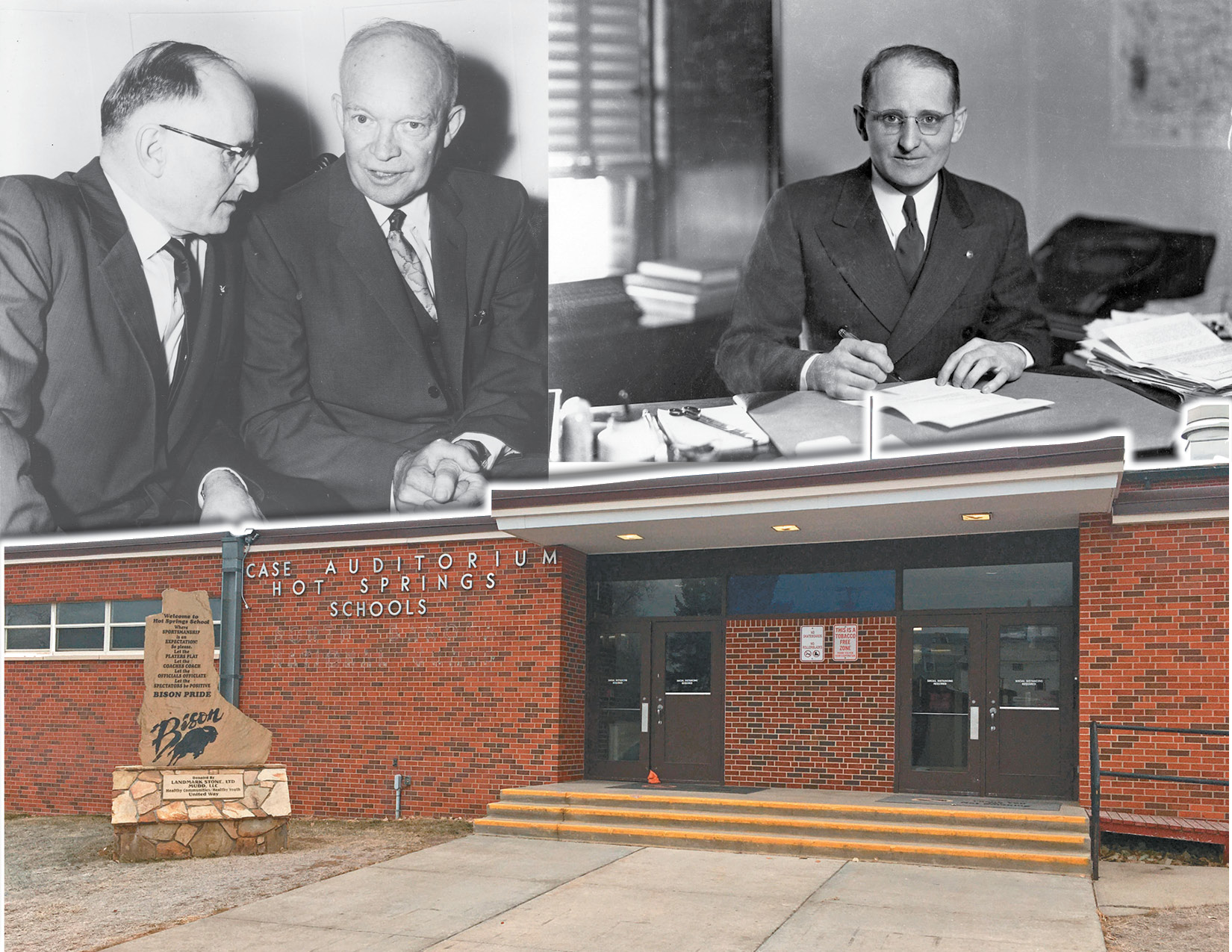 Hot Springs High School’s Case Auditorium, which is the school’s primary gymnasium for basketball, volleyball and many other events, was officially dedicated on Nov. 18, 1962, and named for Francis Case, a 1914 graduate of Hot Springs High School. Case was a WWI veteran and served South Dakota in the U.S. House of Representatives (1937 - 1951) and then the U.S. Senate, until his sudden death from a heart attack in June of 1962. He was 65-years-old.

Publisher’s Note: This story about Francis Higbee Case is the next in an ongoing series of stories by the Fall River County Herald-Star to highlight the history of the people behind the names of many of our county’s buildings, landmarks and attractions.

HOT SPRINGS --- In July 1959, the Hot Springs School District’s facilities committee recommended that a new multipurpose gymnasium be built to accommodate a variety of activities not only for the school but also the community. That November, the proposed plan was voted on and passed by the public.

After construction was complete, the new addition was officially dedicated on Nov. 18, 1962, as Case Auditorium in memory of Francis Case, a graduate of Hot Springs High School and member of the United States Congress for 25 years.

Herbert was a Methodist pastor who began his ministry at only age 18. He worked as a circuit rider and preached at small, rural churches throughout northwest Iowa in the1880s and 90s.

In 1909, the Superintendent of the Black Hills Mission Conference of the Methodist Church requested Reverend Case to relocate to Sturgis, S.D., and become the pastor of the local Methodist Church there.

Herbert accepted the call and traveled via emigrant train (without the rest of his family) to the Black Hills from Iowa. Among the possessions he brought with him included a cow, two horses, some chickens, and an Epworth piano.

When Herbert arrived in Sturgis, the town was overflowing with so many new homesteaders to the area that he could not find a place to stay.

“I went back to the boxcar in which I had ridden 600 miles and stayed in the bed farmer friends had fixed for me,” Herbert recalled later in life.

On his first Sunday as pastor, he explained to his curious onlooking parishioners: “Most wish their pastor to come to the pulpit looking as if he had stepped out of a bandbox, but, unable to rent a room, I come out of a boxcar.”

Herbert sold one of his horses for $125 in order to pay for train tickets for his wife and children to join him in South Dakota. Mary and the children, including Francis, soon arrived in Sturgis and the family lived in a cabin located one mile north of Bear Butte.

In 1913, the Case family moved to Hot Springs when Herbert became the pastor of the Methodist Church, then located near the present site of the United Churches on North Garden Street.

In 1914, Francis Case graduated from Hot Springs High School and attended college at Dakota Wesleyan University in Mitchell, S.D. He graduated from DWU in 1918 with a degree in history and promptly enlisted in the U.S. Marine Corps. He served as a private during the closing months of WWI.

After the war, Francis enrolled in graduate school at Northwestern University in Evanston, Ill. He earned a master’s degree in history and subsequently began a career in journalism.

Francis was an assistant editor at the Epworth Herald in Chicago from 1920-22, editorial writer for the Rapid City Daily Journal from 1922-25, publisher and part-owner of the Hot Springs Star from 1925-31, and publisher and editor of the Custer Chronicle from 1931-46.

While working at the Star, Francis invited President Calvin Coolidge to spend a summer in the Black Hills. The president accepted the offer and spent much of the summer of 1927 living at the State Game Lodge in Custer State Park.

In 1936, Francis was elected to the U.S. House of Representatives as a Republican and served South Dakota’s 2nd District from 1937-51.

In 1950, Francis decided to run for U.S. Senate and easily defeated his Democratic opponent, John “Chan” Gurney, with 63% of the vote.

While serving in the Senate, Francis was known as a “mild-mannered moderate,” an “agrarian conservative,” and he “showed not only his interest in the welfare of South Dakota’s citizens but in the nation as a whole.” The Washington Post noted that his “earnest sincerity was a credit to Midwest Republicanism.”

Francis was given a nickname by members of the Washington press: “Senator Comma.”

Perhaps because of his long career in journalism, Francis “was known as a stickler for detail and accuracy, a characteristic that prompted Capitol Hill reporters to refer to him as ‘Senator Comma.’”

Francis frequently asked for revisions down to the very smallest detail of pending legislation in the Senate.

When asked about Senator Case’s detail-oriented reputation, Republican Senate Minority Leader Everett Dirksen of Illinois remarked: “Case was really one of the diligent diggers of the legislative history of the country. I had to marvel at his capacity.”

In 1956, Francis made national headlines when it was reported that he had refused to take a $2,500 bribe.

The Washington Post reported: “The offer came in 1956 when a $2,500 campaign contribution was dangled before the South Dakota Republican with the object of influencing his vote on natural gas legislation then before Congress. Mr. Case was shocked by the blatant offer, and had enough courage to expose this attempt to use money to buy votes.”

Senator Case also served as the “mayor” of the District of Columbia, and “was instrumental in securing presidential voting rights for the residents.”

Francis Case and Badger Clark, South Dakota’s first poet laureate who lived for a large portion of his life in a cabin in Custer State Park, were friends for over 40 years.

When Badger Clark died in 1957, Senator Case sent a letter to the Superintendent of Custer State Park with a suggestion: “Has Custer State Park considered the possibility of maintaining the Badger Clark cabin as a shrine or literary museum? It really seems to me that such a proposal would be a worthy project in memory of the Poet Laureate of South Dakota and in well deserved tribute to what Badger did to make the free spirit of South Dakota and the beauty of the Black Hills more widely known and appreciated.”

On June 15, 1958, Francis’ idea became a reality when Badger Clark’s cabin was formally dedicated as a museum.

In what would be his last newsletter to his constituents, Senator Case wrote in March of 1962: “The destiny of man in the Providence of God is not the destruction of His universe. It is the privileged responsibility of everyone to hope and to work for a brighter day for all mankind.”

During his second term in the Senate, Francis Case died of a heart attack in Washington, D.C., on June 22, 1962, at the age of 65. He left behind his wife, Myrle, and his daughter, June. It was his second heart attack within a month.

The Washington Post reported: “One of the Senate’s most conscientious members and long-time friend of the District died in Bethesda Naval Hospital yesterday morning of a heart attack. Less than 24 hours before his death, the 25-year congressional veteran took part in floor debate and was working in his office on a speech to be delivered later in the evening when he was stricken. He died at 9:19 a.m.”

Upon hearing of his death, the Senate adjourned for the day out of respect “after paying nonpartisan tribute to him as a legislator of high ability and integrity.”

Reverend Edward G. Latch presided over the service and said of Francis: “Honesty and integrity were the very core of his being. He was faithful in his work, faithful to his church, faithful to his family.”

Funeral services were later held at the Rapid City Methodist Church. Francis is buried in the Black Hills National Cemetery in Sturgis.

A letter from President John F. Kennedy to Mrs. Case was read aloud at the funeral. The president said of Francis: “During our service together in the Senate, I grew to respect his ability and integrity and I know that his passing will not only be a great personal loss to you but to the people he served so effectively.”

In 1965, Congress passed a bill to rename an eight-lane bridge over the Washington Channel that carries Interstate 395 traffic to and from Washington, D.C., in honor of Francis.

Case Auditorium at Hot Springs High School is not the only structure named for Senator Case in South Dakota. Francis Case Elementary School in Box Elder and Lake Francis Case along the Missouri River are also named in his honor.

The Hot Springs Star remembered Francis Case in this way, which was read aloud during memorial addresses delivered in a joint session of Congress: “The Senator’s years in Hot Springs, as a student, and as publisher of the Hot Springs Star, give our area every right to remember him as a favorite son.”

Thank you to Laurie Langland, University Archivist at Dakota Wesleyan University and Matthew T. Reitzel and Halley Hair at the South Dakota State Archives for their contribution to this story. Information and photos for this article obtained from: the books “Fall River County Pioneer Histories’’ and “Hon. Francis H. Case; 1896-1962,” newspaper archives, and the Helen Magee Collection.