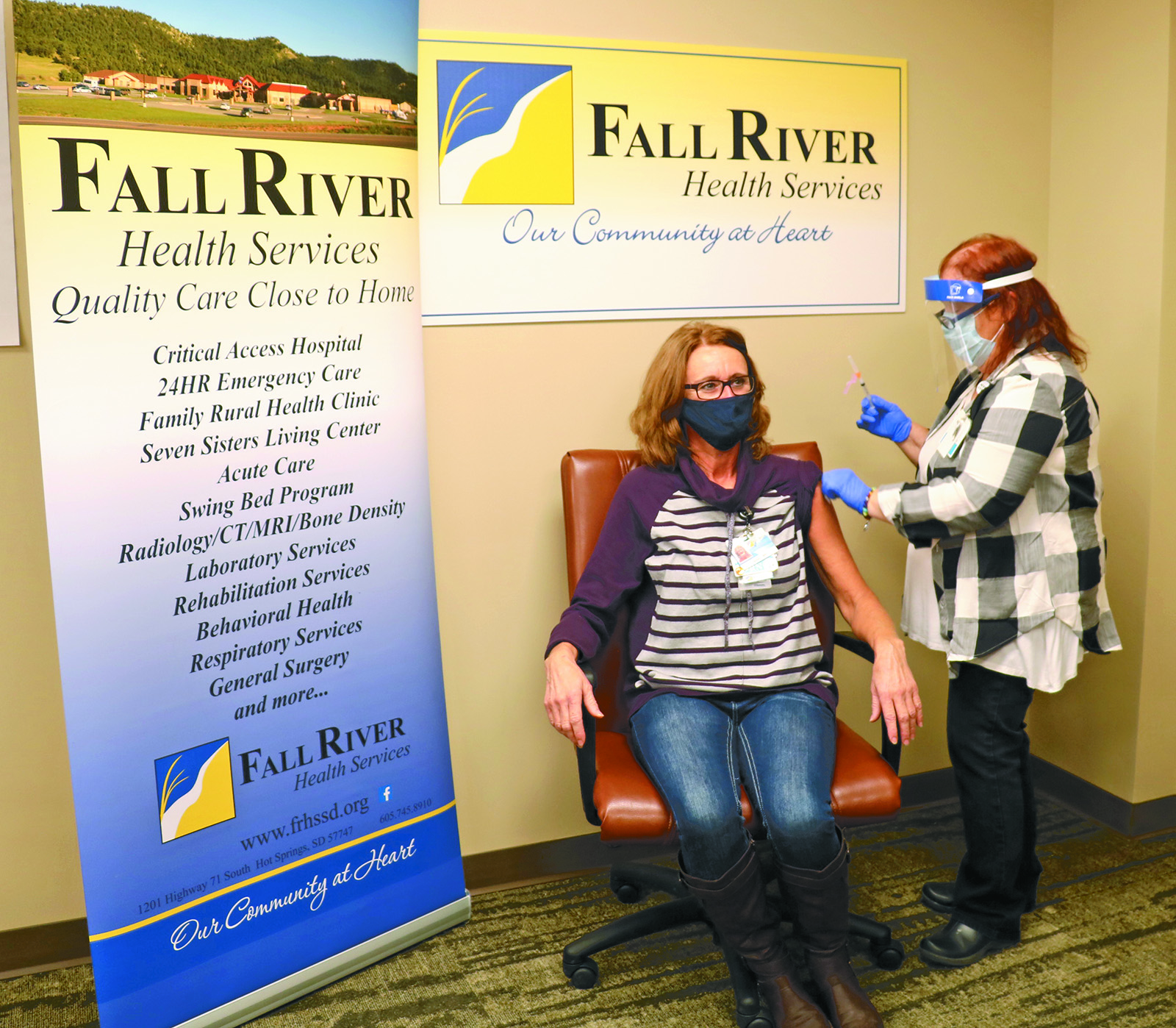 Shortly before 1 p.m., employees from the three Hot Springs healthcare facilities began arriving at the FRHS administrative conference room where they proceeded to fill out paperwork for their vaccination and then get in line. First to receive a shot was FRHS Registered Nurse JoAnn Norton, who said afterwards, “I am a firm believer in vaccines, and I practice what I preach. I want to see an end to COVID, and this is the beginning to the end.”

Michelle Gross, a Pharmacy Tech at the State Veterans Home, was also one of the first people in Hot Springs to receive a vaccination. Afterwards, she said, “I was very anxious to receive the vaccine. I want to do my part in putting this pandemic to an end and this gives me comfort that we are getting that done.”

A total of 30 vaccinations were given on Tuesday with 70 more planned for Wednesday to be given to others in the Phase 1A and 1C priority groups, which include the aforementioned Frontline and Long-Term Care Healthcare Workers (1A) as well as other healthcare workers (laboratory and clinical staff), public health workers, emergency medical services, law enforcement and correctional officers (1C).

According to Tif Robertson, a spokesperson for FRHS, long-term care and assisted living residents in the Phase 1B priority group are being vaccinated as part of a government program.

“This vaccine is not part of South Dakota’s Department of Health inventory,” Robertson said. “The State Veteran’s Home, Pine Hills, and Seven Sister’s Living Center’s residents should all be offered vaccination per this program in January.”

The 100 Moderna vaccines received by FRHS last week represented the first of what is expected to be a weekly supply of 100 vaccines to be made available to Fall River area Phase 1 priority groups, now and every week into the foreseeable future, according to Jim Woehl, CNP. The Moderna vaccine requires a second dose to be given exactly 28 days after the first. Those who received a shot last Tuesday, Dec. 22, were then immediately scheduled to receive their second shot four weeks later on Jan. 19, 2021.

Once all of the area’s 1A and 1C priority groups have been given an opportunity to receive the vaccine over the next couple of weeks, the remaining Phase 1 groups will be given access. These Phase 1 subgroups include the aforementioned Long-Term Residents in nursing homes and assisted living (1B); persons with two ore more qualifying underlying health conditions, teachers and other school staff, persons aged 65 years and older, residents of group homes/living facilities, funeral service workers (1D); fire service personnel and other critical infrastructure workers (1E).

Woehl said if the weekly supply of 100 vaccines continue to come in as expected, he hopes to have an immunization clinic set up by the first of February to make the vaccine available to a wider segment of population, and hopefully include people outside the initial Phase 1 priority group who also want the vaccine.

Robertson said the State Department of Health (DOH) is in charge of determining when other groups will be offered the vaccine and when FRHS will be able to provide it to the public (Phase 1D.)

“We recommend those who are identified as Phase 1D continue to pay attention to communications from the Department of Health and Fall River Health Services for more information as it becomes available,” she said.

Planning for last week’s first vaccinations began about three weeks prior, according to Woehl, who said that Director of Outpatient Services/Pharmacy Director Shelly Gardner took the lead on that and had been on regular teleconferences with the Department of Health and other groups as she worked to secure vaccines for Fall River Health Services to administer to area residents.

Woehl said that since the first approved vaccine from Pfizer required being stored in freezers at temperatures below -100 degrees, that vaccine was never going to be an option for rural health facilities like Fall River, due to lacking the necessary equipment. However, once the Moderna vaccine was approved – which can be kept in regular freezers – things started to move much quicker towards FRHS receiving their regular share of the vaccines.

The Pfizer vaccine currently is only being utilized in South Dakota’s two largest cities of Sioux Falls and Rapid City. That vaccine also requires a second dose, with the second shot needing to be administered 21 days after the first.

After receiving her Moderna vaccination last Wednesday, Gardner expressed her excitement for the vaccine being made available locally.

“I am so excited that FRHS is able to offer the COVID-19 vaccine to our local healthcare workers, and look forward to the time when our entire community can receive the vaccine, she said. “I have reviewed the data and I personally feel the vaccine is safe and effective. In the meantime, please continue to respect each other and continue to wear your mask, wash your hands, and social distance when appropriate.”

When asked about potential side effects of the Moderna vaccine, Woehl agreed with Gardner and said he believed it to be very safe. Side effects that have been reported have been minimal, he said, and usually show up in the first 24 to 48 hours after receiving the shot, and include a sore arm near the shot placement, along with some other aches and pains or a possible fever.

Also of note is the fact that the vaccines are free of charge to everyone and being paid for by the federal government, which is facilitating the roll out of the vaccines to each of the states. Woehl said Monument Health has been designated as the state’s West River distribution site, which is where Fall River’s Moderna vaccines are coming from each week.

Another FRHS employee who has been involved with the implementation of the vaccine, but from a more nationwide standpoint, is Ed Pellicotte, who is been with FRHS since 2002 and is currently the Imaging Manager.

Pellicotte expressed his immense pride for being a part of Fall River Health Service, which he described as being “cutting edge at all times.”

Back in August, Pellicotte said he had heard the large pharmaceutical companies were beginning clinical trials on their vaccines at 50 different test sites around the country. Wanting to do what he could to help with the process, he volunteered to take part.

So earlier this fall, he traveled to Sioux City to be part of Pfizer’s double-blind clinical trials. There he received his first shot on Sept. 11 and his second shot on Oct. 2. The trial Pellicotte was a part of included 20,000 people receiving the vaccine with 20,000 others receiving a placebo shot. He said he found out by email earlier this month that he was actually part of the placebo group, which allows him to now receive the actual vaccine. Since he was part of the original Pfizer clinical trial, he chose to go back to Sioux City to get the Pfizer vaccine on Dec. 18. He is scheduled to get his second shot on Jan. 8 and will travel back to Sioux City for that as well.

He said after receiving the vaccine, he did have a sore arm and felt a “smidge tired” for a shor time afterwards, but was feeling back to normal by the next day.

Pellicotte said he and his family have been taking part in all of the recommended precautions related to the spread of COVID-19, which included having their children do distance learning instead of attending in-person classes and participating in sports. He believes their efforts have paid off, as none of them have contracted the virus as of yet.

As a retired member of the U.S. Army and National Guard, Pellicotte said he is very well accustomed to receiving vaccines and is a big proponent of people getting the COVID-19 vaccine.

While FRHS was excited to provide their first Moderna vaccines last week, they also wanted to remind the public that they also have Remdesivir and Bamlanivumab available for their patients who have been infected with COVID-19.

Remdesivir is an anti-viral medication that may be given to patients who require hospitalization for COVID-19; Bamlanivumab is a monoclonal antibody that ‘neutralizes’ the virus and may be given early in the disease process.

Studies have shown when Bamlanivumab is given within 10 days of COVID symptoms, ER visits and hospitalizations are decreased.