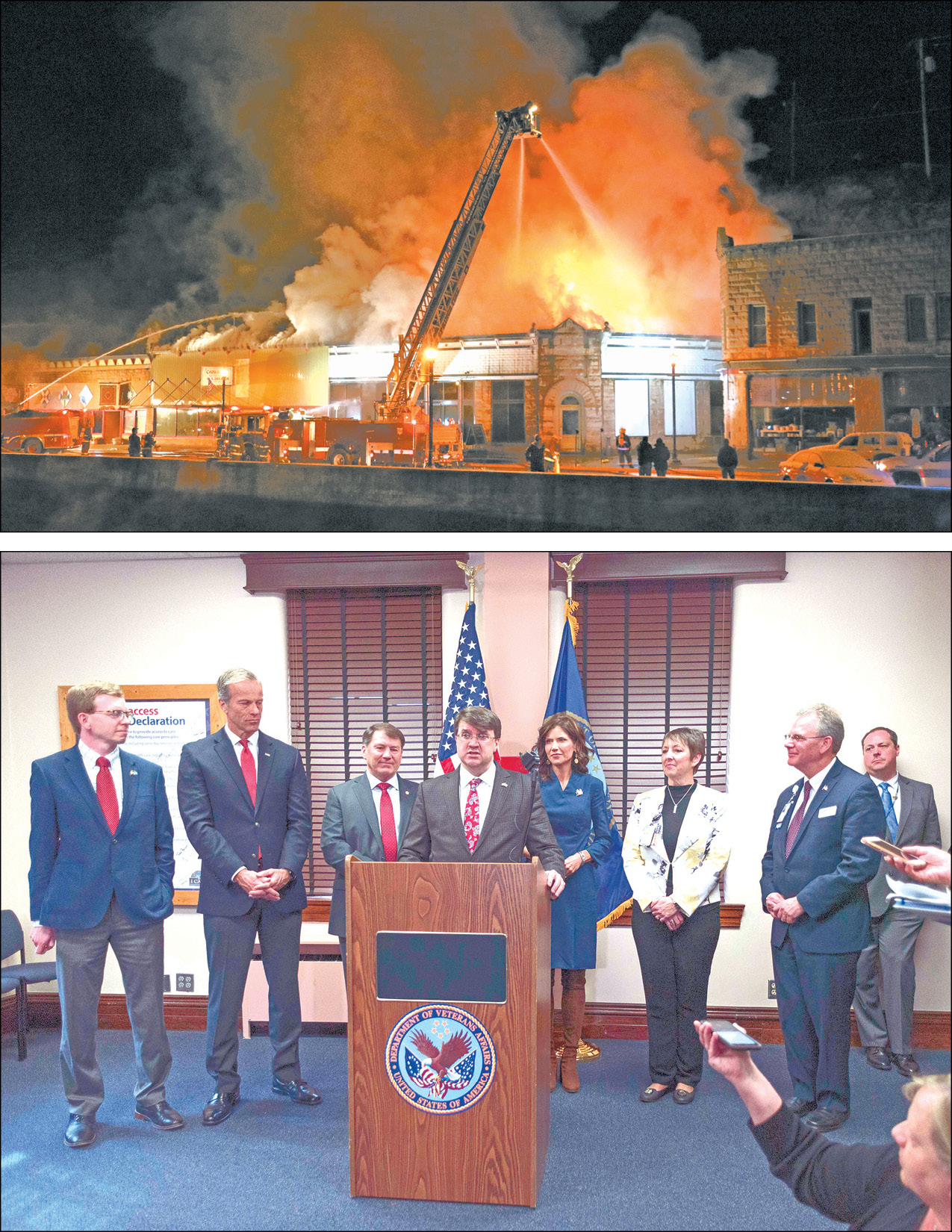 TOP: In addition to headlines about COVID-19, the past year’s Fall River County Herald-Star also featured a series of stories and photos about the devastating North River Street Fire which occured on the night of Monday, Feb. 17, and destroyed five businesses along with a residence. (Photo by Brett Nachtigall/FRCH-S)

BOTTOM: This past year also featured some good news for the area, including on Monday, March 2, when VA Secretary Robert Wilkie came to Hot Springs with South Dakota’s Congressional Delegation to announce the Hot Springs VA would not close. (Photo by Eric Boyd/FRCH-S)

The pages of the Fall River County Herald-Star in 2020 were obviously dominated by stories related to the COVID-19 pandemic, but many other stories were also on the minds of local residents over the past 52 weeks as well, including the North River Street Fire and the VA’s announcement that they were not planning to close the Hot Springs facility.

Following is a review of some of the top newspaper headlines from each month in 2020.

• Alcohol to be banned in Brookside Park

• Hot Springs School Board planning to not renew contracts of all three of its principals: Vote however goes awry and count return to next agenda

• Rock Steady Boxing: New exercise program in Hot Springs is one of only five in the state to treat patients with Parkinson’s

• State Veterans Home Building 2: A monument to history, with a new purpose

• In the Wake of Tragedy: The Vault owner looking to rebuild

• Dr. Wittenburg looks back on his time as local newspaper cartoonist

• Fall River learns of its first resident with COVID-19

• Edgemont Seniors frustrated by the closure of Senior Center

• When it comes to COVID-19, honesty is the best policy

• Area grocers on the front lines and feeding the people

• The Cattleman’s Cost: How ‘Big Beef’ is taking a bite out of local growers

• Amid COVID-19 concerns, voters encouraged to use absentee ballot

• Incoming Superintendent describes some of the planned restructuring

• Six Republicans running for three seats in the state legislature

• DOT repairing Hwy. 18 stretch that will eventually be turned over to city

• Edgemont track, concession stand getting closer to a finished product

• Demolition of burned down buildings continues on North River

• Governor’s Houses being moved to State Home for staff housing

• Despite COVID-19, sales tax revenue is up in city

• Boys & Girls Club reopens, serves up to 40 kids per day

• Nelson sworn in as new Mayor of Hot Springs

• Sandstone facade of The Vault unable to be saved

• Black Hills Wild Horse Sanctuary closed to tourists, but to redesign itself as a veterans-based rehabilitation center

• Still no leads, in Englebert disappearance a year later

• City of Hot Springs to address cattails along Fall River

• Battle Mountain Road to be closed through Oct. 23

• Strong winds do damage near Angostura

• Klein, aka The Can Man, was part of Hot Springs’ identity

• SDLTAP to assess Shep’s Canyon Road for the county

• Oelrichs School votes to not have winter sports

• Timeline of Hwy. 385 reconstruction project linked to fate of Wesch-Oak

• Volunteers gather to launch new ‘Can Man Can Do’ Scholarship

• Tennis Courts to be renamed to honor Dr. Paul Wittenberg

• Tierney once again in spotlight at National Finals Rodeo