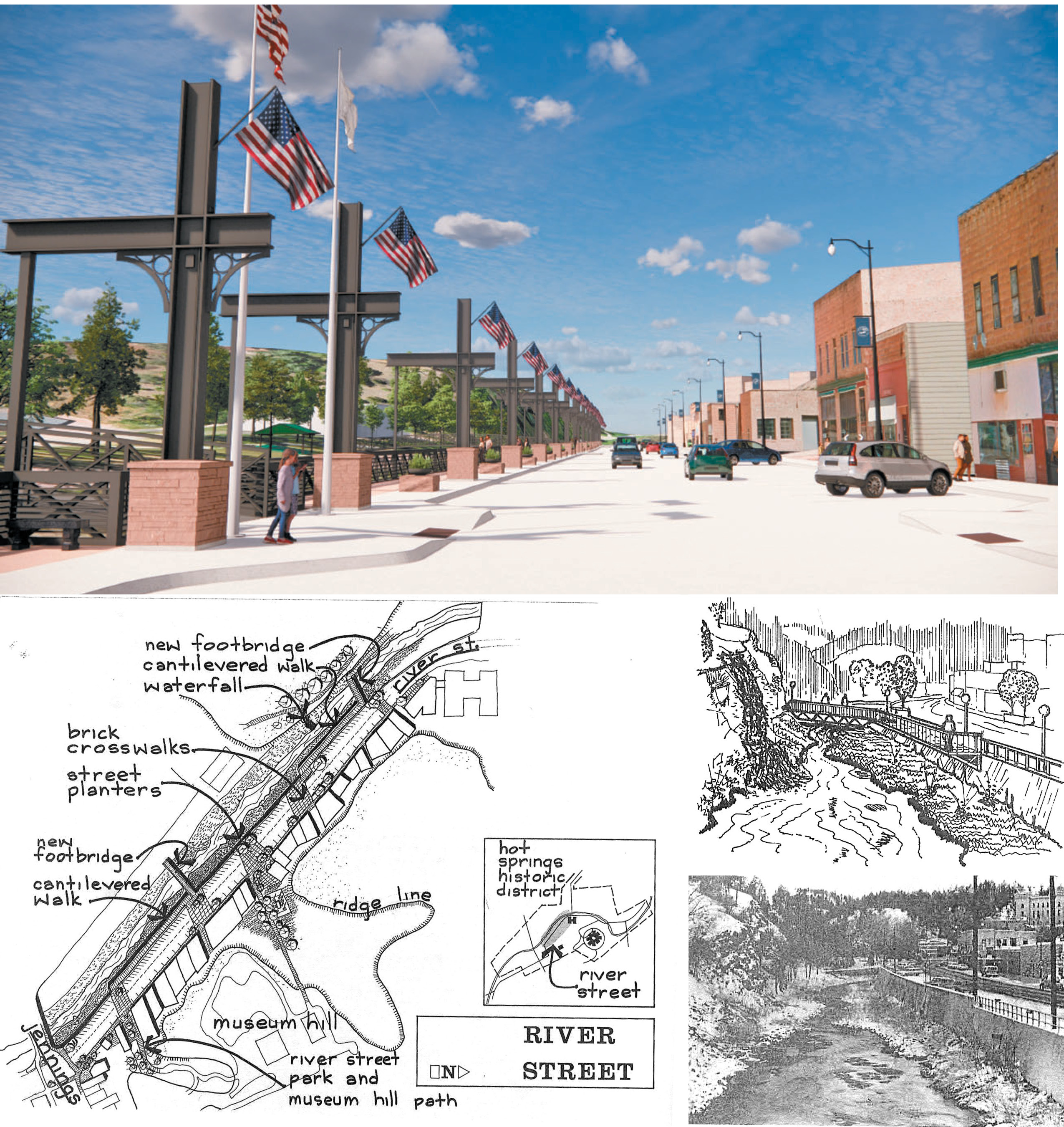 TOP: This drawing shows a street level view from near City Hall of Hot Springs’ planned suspended sidewalk. The project is planned to commence at the same time of the state’s Hwy. 385 reconstruction project in late 2021.

BOTTOM LEFT: This diagram shows an overhead look at the 1975 proposed enhancements to the River Street area of downtown Hot Springs, which included a possible cantilevered walk above Fall River.

BOTTOM RIGHT: This photo shows what Fall River looked like in 1975, while this drawing (created in 1975) shows a cantilever sidewalk concept that is similar to the planned suspended sidewalk that will be built and completed as part of the upcoming Hwy. 385 reconstruction project. Also shown on the left is the waterfall with a proposed increased waterflow.

Similar idea for sidewalk proposed in a 1975 Historic Revitalization document

HOT SPRINGS – Hot Springs Mayor Bob Nelson and City Administrator John Gregory recently shared their excitement for how well plans are coming along for the downtown suspended sidewalk, which will be built the same time as the Hwy. 385 reconstruction project.

At the top of their list of reasons for their excitement is the fact that the suspended sidewalk is going to be completed at or near its projected $2.8 million price tag. Of that amount, according to Gregory, just over $400,000 has already been allocated for an engineering survey and core sample drilling.

Gregory added that through the drilling process, they were able to get a better understanding of the ground underneath the roadway which allowed for a slight redesign of the sidewalk’s anchored foundation. This in turn allowed for some cost savings by using new micropile technology which utilizes narrower, but deeper, high-performance, high-capacity drilled foundation elements. Micropiles are comprised of high-strength steel casing, rebar and grout.

In addition to the fact that the project should come in at budget, Mayor Nelson said another reason for his excitement is how the entire project is coming together – not only from a cost and engineering standpoint, but also in how the latest drawings have turned out.

While not a lot has changed from the original sidewalk drawings released back in March, Mayor Nelson noted how some of the bump-outs were removed, which would have been a snow removal nightmare. He and Gregory also mentioned how there is now a plan to utilize locally-quarried, repurposed sandstone in some of the sidewalk’s surrounding walls and plant pods.

Mayor Nelson credits former Mayor George Kotti for the work he did throughout his time as Mayor to push for the concept of the suspended sidewalk.

“Mayor Kotti worked a long time on this, and now it looks like its going to happen,” Nelson stated. “A lot of people are now going to travel to Hot Springs to see what we have here.”

The State DOT recently announced at a Hot Springs City Council meeting that they plan to let bids for the Hwy. 385 reconstruction project next fall, which would likely mean work would commence sometime in late 2021 and be ongoing for two full years. The suspended sidewalk on North River Street from Jennings Avenue to Minnekahta Avenue would be completed at the same time.

An interesting side note to the upcoming suspended sidewalk project is the fact that it’s not the first time the idea has been proposed.

According to a 96-page document entitled “Historic Revitalization: Hot Springs, S.D.” published in 1975 by Jim Mueller and Kim Williams, a cantilever sidewalk along that area of North River Street was one of numerous ideas presented by the two local authors as a way to create “Historic Conservation.” This, they said, “involves retaining the historic nature of an area while adapting it and its buildings to contemporary use.”

Their document then provided detailed individual proposals for seven different areas of the community. Those areas included: 1) Old Town – Chicago Street from Albany Avenue to Jennings Avenue; 2) Mill Area – one block to the west of Old Town; 3) Castle Park Area – below the former Southern Hills General Hospital in and around the volunteer fire station; 4) River Street – from Jennings Avenue to Minnekahta Avenue; 5) Museum Hill – in and around the current Pioneer Museum; 6) Evans Area – from all around the Kidney Springs and the Minnekahta Avenue intersection to the Depot Visitors Center to Main Street where Golden West is currently located; and, 7) North End – from the Braun Hotel to Evans Plunge.

In each of these areas of Hot Springs’ business district, the 45-year old document outlined various enhancements and building restoration projects which emphasized the town’s unique physical characteristics. They broke down these characteristics into four categories: 1) The historical quality of the town and its buildings; 2) The compact and “enclosed” layout of the older parts of town; 3) The presence of business and social activity in the older parts of town; and, 4) The nearness and beauty of natural features.

In regards to the “River Street” section of the document, their improvements proposed included: 1) Restore historic building facades and remodel others; 2) Modify signage to insure compatibility within the Historic District; 3) ‘Break up’ the long street by planting trees, using brick for sidewalks and crosswalks, and by selecting street lamps of a more historic variety; 4) Develop Museum Hill Path and a park area on the lots north of, and behind, the Domestic Electric building (now the former Sancho’s Bar & Grill); 5) Develop river walks and footbridges to attract and keep shoppers.

At the time of the proposal, the existing area of Fall River along River Street did include what was referred to as a “periodic manmade waterfall,” but this document included a plan to increase the flow of the waterfall to make it more of an attraction, along with an additional pedestrian bridge in the area.

While the vast majority of the ideas presented in the “Historic Revitalization” document have not come to reality, there are a few that have been implemented in one form or another over the past 45 years. Some of those include the creation of the Freedom Trail built in the early 1990s, the refurbished concrete stairway to the Pioneer Museum from North River Street around 2000, and the installation of historic-looking street lights and other pedestrian intersection enhancements like stamped concrete and street corner plant pods, also in the early 1990s.

Current City Engineer Tracy Bastian said he was involved with some of the planning for the current street lights when working part-time for the city while earning his Engineering degree. He credits then-City Engineer John Scheltens for generating the excitement and acquiring the grants to make those things a reality 25 to 30 years ago.