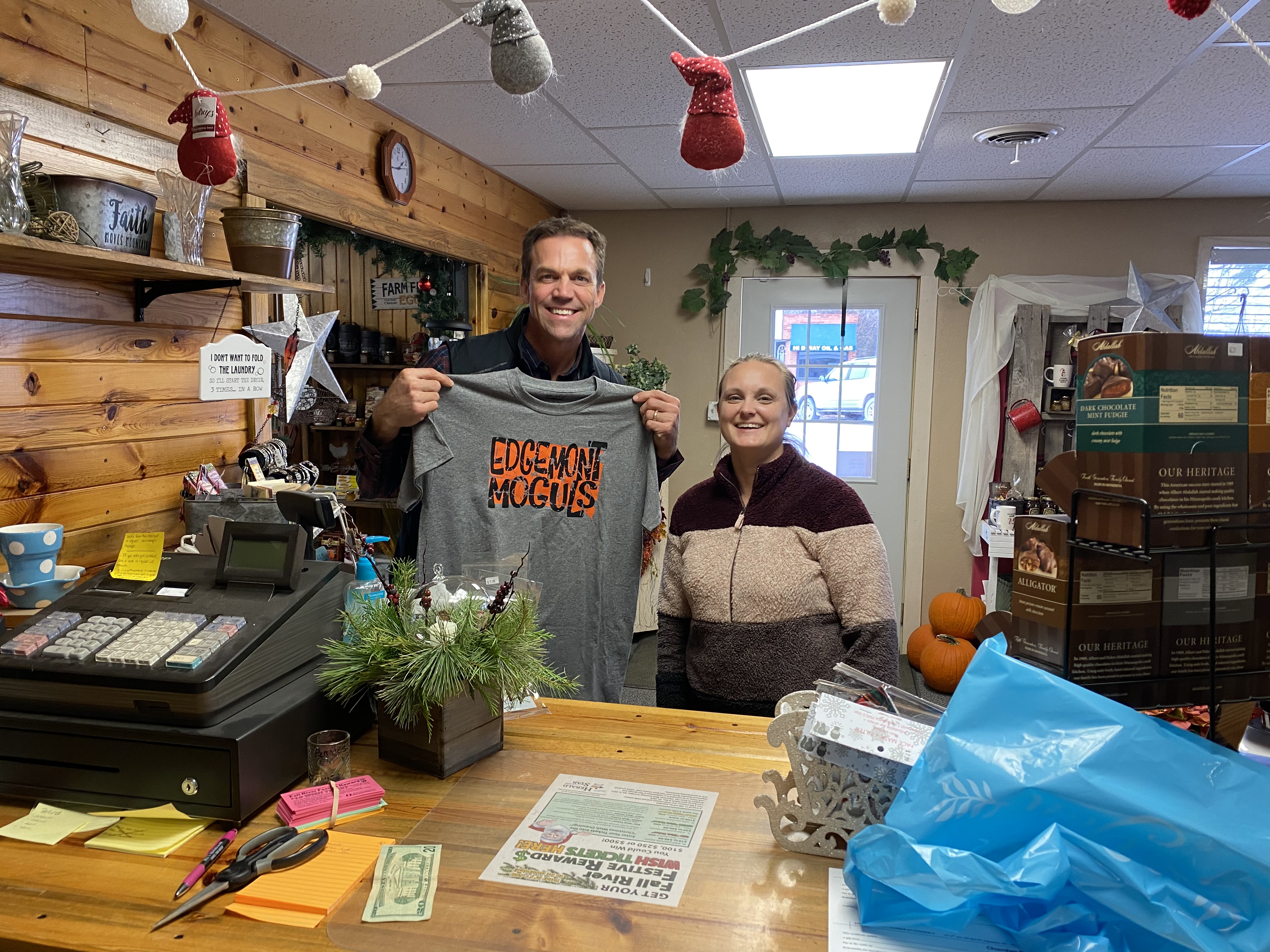 First Gentleman Bryon Noem stops in to visit with Christina Heisler at The Floral Depot while in Edgemont as part of his “This is South Dakota” Initiative.

EDGEMONT – This past Friday afternoon, Edgemont received a visit from First Gentleman Bryon Noem, the first in history to receive this designation when his wife, Governor Kristi Noem, was sworn in as the 33rd Governor of South Dakota.

Noem has made it his mission as First Gentleman to tell the stories of small town South Dakota by visiting the communities and learning more about their history and present day issues and concerns. In an initiative themed “This is South Dakota,” Noem stops in to local businesses of every stripe and engages in conversation with the residents he encounters along the way. Old movie theatres, vintage t-shirt shops, gymnasiums, museums, and yes, about every dining venue one could imagine have been visited along the way.

His focus on small town South Dakota is easy to explain. Noem grew up on a farm near the town of Bryant and returned there after college prior to getting into the insurance business. He and his wife, Gov. Kristi Noem attended the same high school and shared the desire of many fellow South Dakotans to have a successful farm or ranch. In addition to raising their three children, the couple have operated a farm and ranch, opened an ice cream shop, helped manage a family restaurant, and been involved with other business pursuits.

In a statement released to introduce his new initiative, Noem shared his motivations for focusing on the state’s small towns and communities.

“I am proud to be from rural South Dakota,” said Noem. “It’s where I learned the values of hard work and self-reliance, where Kristi and I chose to raise our kids, where we started an insurance business and hunting lodge, and where my family has farmed and ranched for a century. But many small towns like ours are struggling today. Class sizes are dropping. Businesses can’t afford to stay open. And fewer kids are coming home to farm or ranch. While South Dakota has grown by more than 100,000 people since 2000, rural populations have decreased. Seeing our larger communities flourish is exciting, but I want to make sure we don’t lose South Dakota’s rural culture either. I want to remind people that these are some of the best places to raise a family or start a business. I want to show that our way of life here is worth celebrating and promoting. I want to listen to peoples’ stories and learn from their experiences, then share them with others.”

During his visit to Edgemont, Noem had lunch at the Benchwarmer with Mayor Carla Schepler, City Finance Officer Karen Cain, and Edgemont Area Chamber of Commerce Executive Director Christina Heisler. Noem listened as a variety of topics were discussed, among them concerns associated with the safety of pedestrians and traffic crossing Highway 18 back and forth between the Yesway stores and Dollar General. Ben Koisti, Policy Analyst with the Governors’ Office confirmed that Mr. Noem visited with Brent and Karen White at The Gun Vault. Noem afterwards stopped in at Igloo Bar for a visit with Cad Waite, Rich Artz, Diego Toccaceli,  and Jesse Stubbs. Christina Heisler at the Floral Depot. briefly stopped in at the start of the afternoon Moguls basketball games and chatted with folks present there, including Mark Hollenbeck. Hollenbeck informed Noem about the recent issuance of permits from the EPA for the Powertech USA Inc. uranium mining project.

Among the stories and “fun facts” about Edgemont of interest to Mr. Noem’s group were the tale of how Igloo Bar got its name, the client demand for firearms and ammunition from Gun Vault, and that “Mile 0” of the Mickelson Trail starts in Edgemont.