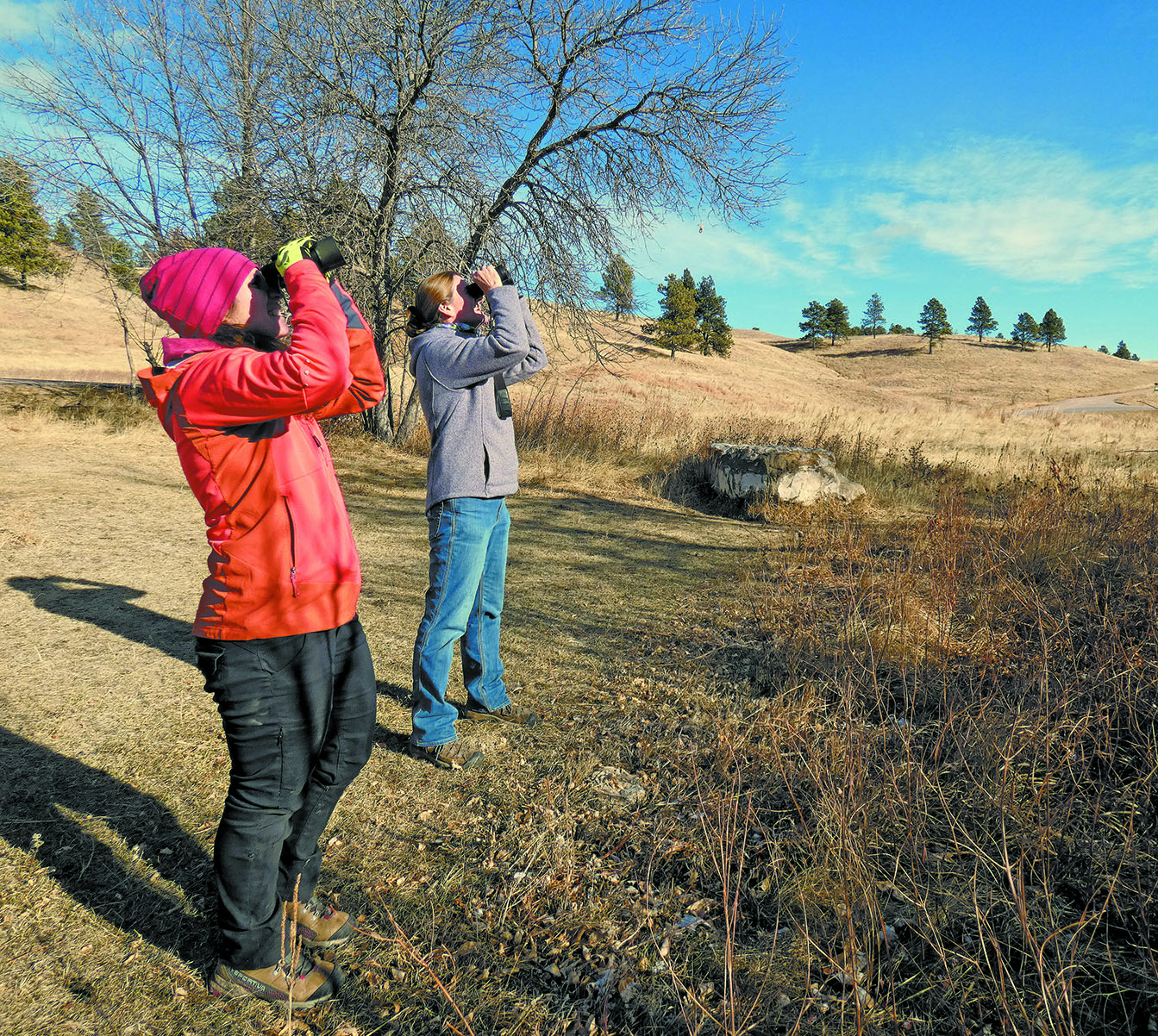 Christmas Bird Count volunteers Julie Brazell and Andrea Fountain spot a golden eagle soaring high above them in the southern portion of Custer State Park on the Wildlife Loop near the Prairie Trail.

“The count is patterned after the nationwide National Audubon Society effort to document trends in wintering birdlife throughout the United States,” said Angela Jarding, Wildlife Biologist for Wind Cave.

In addition to the “normally expected” birds such as dark-eyed juncos, black-capped chickadees, and golden eagles seen living in the area for the winter, rare birds have also been sighted throughout the years. Some of the rarest birds spotted during previous counts include a snow bunting in 1996 and a gray-crowned rosy finch in 2018.

“Christmas Bird Count data provides long-term trends in abundance for wintering bird population across North America. Wind Cave National Park uses the data in a similar fashion as an indicator of health of local bird populations. Ornithologists sometimes request our data when researching an individual species. We are grateful to the numerous volunteers who have supported this effort. It is a great free event for those who want to get out on a nice day and enjoy nature...especially during COVID,” Jarding said.

Twenty-five bird count volunteers met outside the Wind Cave Visitor Center at 7:30 a.m. to receive their instructions and route assignments before heading out on their own.

Birding volunteers were given a map of their assigned route, bird count instructions, and a spreadsheet with a list of 68 species of birds to be on the lookout for and record their sightings.

Julie Brazell of Pringle and Andrea Fountain of Hot Springs were assigned a birding route in the southern portion of Custer State Park.

“I volunteered for the annual bird count because it is birding with a purpose. It takes a lot of eyes to see the birds and get an accurate count. I am glad to be contributing and collecting scientific data that means something. The fact that the winter bird count has been held for 25 years provides an amazing database of the number of birds that winter here,” said Brazell.

“It is a fun way to get out and explore and help record data that serves an important purpose. It also allows me to freshen up on my birding skills,” remarked Fountain.

On their long day of birding, Brazell and Fountain spotted a variety of birds such as sharp-tailed grouse, red-tailed hawk, black-capped chickadee, black-billed magpie, red crossbill, and one golden eagle.

Bird count volunteers dropped their completed bird tallies off outside the Visitor Center around 2:30 p.m. The data will be compiled by park staff and the findings will be released later this week.