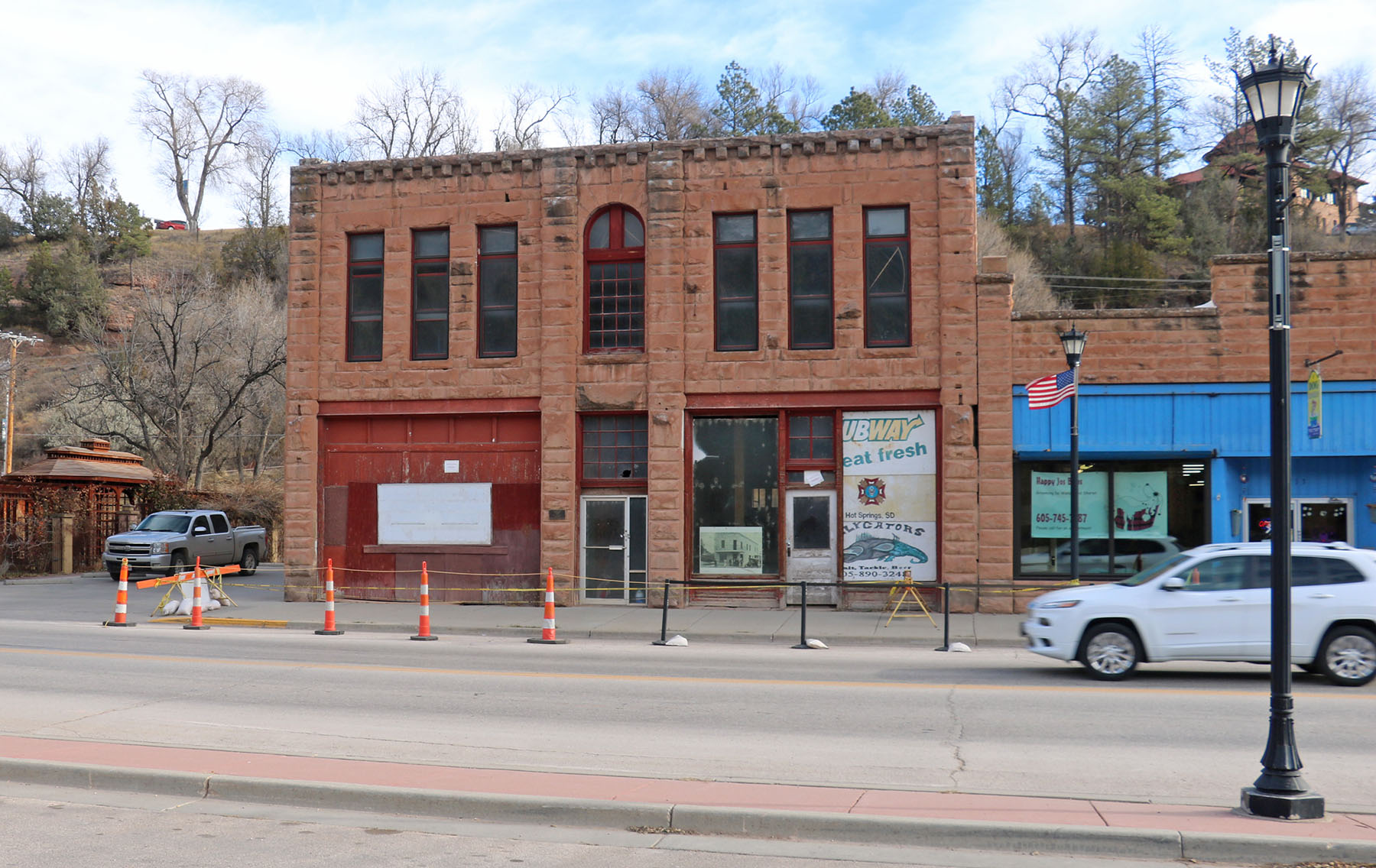 HOT SPRINGS – As pointed out by local business owner Jim Bultsma during ‘Communications from the Public’ at this past Monday night’s Hot Springs City Council meeting, the condemned Wesch-Oak building at 717 North River Street has been vacant, in disrepair and an unproductive part of the downtown business district for more than 20 years.

“I don’t want to see our stone buildings go away. But, that one is at the end of its economic life. It needs to go away,” stated Bultsma, about the two story sandstone structure that was built in 1893. “If you put enough money into it and bring it up to today’s standards; the amount of money is going to be greater than the amount of revenue that could be generated by the use of that building. We have several stone buildings that do not have the issues that building has. There’s many.”

Bultsma’s comments were in response to the November statement by the S.D. Department of Transportation (SD-DOT) that they will not move forward with their planned Hwy. 385 reconstruction project in front of the Wesch-Oak until the structure can be stabilized and made insurable.

Despite the DOT’s emphasis towards the city to make a decision about the building’s future, Mayor Bob Nelson made a special point during Monday’s council meeting to say that the DOT had never pressured the city to tear down the building or pushed for a specific timeline. Rather, Nelson said, the DOT was simply wanting guidance on how they should proceed based on the city’s timeline to either save the building or have it demolished.

Later on in the meeting – and after the city council rejected a proposal by a local contractor to acquire, stabilize and insure the Wesch-Oak – Bultsma’s hopes were realized when the council unanimously approved a resolution to solicit bids for the building’s demolition.

During discussion of Resolution 2020-33 to Abate Nuisance of the Wesch-Oak Building, many councilmembers shared their thoughts and concerns, including Caitlin Turner who said she felt delaying the decision to demolish the building any longer was a gamble and put other businesses at risk, if it were to delay the highway reconstruction any longer.

Councilman Larry Pratt said there were potential lives in danger, as he described the possibility of the building collapsing and injuring a pedestrian or someone in the sandstone building next door, which shares a wall with the Wesch-Oak.

Also discussed was the fact that the council had earlier in the same meeting rejected a proposal presented by Uriah Luallin, a local mason who was representing the newly formed Wesch Oak Restoration Kin, LLC (WORK, LLC).

Their proposal consisted of acquiring the building through a Sheriff’s Sale in the next few months, paying all of the property taxes that cannot be abated, taking over liability of the structure and then building a “berm wall” to stabilize the soils surrounding the foundation walls. According to their printed proposal, they would have the “berm wall” completed by May 31, 2021, and would then have one year from that date “to complete repair of damage to roof and the first and second floor beams, joists and floor caused by water damage.”

In presenting his group’s plan to the council, Luallin said, “The value of these stone buildings is hard to put a price tag on that. My evaluation of it is that’s it’s salvageable and relatively easy, and I believe I can do that.”

“The alternative is to tear it down at great cost, and a loss that will never be replaced,” Luallin said, as he reminded the council that the DOT had earlier in the night presented their plans to delay letting bids on the reconstruction project until next Fall, instead of this coming Spring. (See related story on page ___).

“That gives us an entire summer to make this building insurable. I can do that,” Luallin said.

Following further questioning, Luallin said he could begin work as early as April, but only after he acquires it in a Sheriff’s Sale. With work beginning at that time, Luallin said he should easily be able to stabilize the building and make the other needed repairs to make it insurable by the end of the summer and allow the DOT to let bids in their desired August/September timeframe.

Both Luallin and the City Council acknowledged that there were a number of variables that could interfere with his hoped timeline. However, Luallin remained confident in his abilities to make his plans a reality, but the majority of the city council wasn’t as confident.

Councilperson Debra Johnston initially motioned to table a decision on Luallin’s proposal, but that failed to pass by a 5 to 3 vote. A subsequent motion to reject Luallin’s proposal then passed by the same margin. Voting to reject the proposal were councilmembers David Burris, Wes Grimes, Bill Lukens, Pratt and Turner. Voting not to reject the proposal were J.R. Huddleston, Craig Romey and Johnston.

Later in the meeting, and shortly before the council approved the city’s plans to demolish the building, City Attorney Garland Goff pointed out that since the decision to abate the nusiance was being made by resolution, the council had the power to reverse the action, prior to the building actually coming down.

Goff described the passage of the resolution as “turning on a switch” to begin the process of soliciting bids for demolition. However, if by a “miracle” someone of great wealth stepped forward and was able to perform the needed improvements to save the building in a quick timeframe, “the switch could be turned off.”