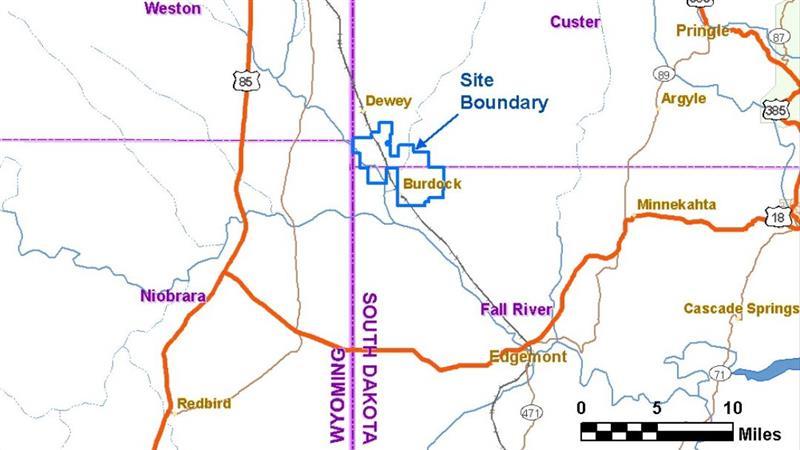 This map shows the location of the Dewey-Burdock uranium project along the Custer and Fall River County border near Wyoming.

According to the news release, the EPA based its decision on Powertech’s applications, the agency’s authority and regulatory power under the Safe Drinking Water Act and a public comment process that began in 2017. Permits were said to have been revised based on a thorough review of all technical and regulatory information associated with the project and public comments. The revisions include specific requirements to protect groundwater resources as current and future sources of drinking water under the Safe Drinking Water Act in the proposed project area which includes southwestern Custer County and northwestern Fall River County.

“These permits reflect many years of evaluation and public comment on Powertech’s applications to recover uranium from ore-bearing formations at the Dewey-Burdock project location,” said EPA Regional Administrator Gregory Sopkin in a statement issued in the news release. “EPA’s final actions are based on a thorough consideration of scientific, technical, and regulatory aspects of the permits, and a review of all the comments received, including those received during tribal consultation. This process has contributed to the development of requirements that will protect the region’s groundwater while enabling the safe recovery of valuable uranium resources.”

The Permit sets conditions that must be met in order for the Minnelusa Aquifer to meet the criteria to be used for the location of injection wells for wastewater disposal. Testing and sampling is required to be conducted prior to Powertech receiving authorization to inject wastewater from the extraction process. Samples of water must be tested for dissolved solids that would affect its status as drinking water. If any swabbed zone sample contains less than 10,000 mg/L total dissolved solids, it is considered an Underground Source of Drinking Water and the permit states that the EPA Director will not authorize injection into an USDW under this Area Permit.

While drilling each injection well, core samples must be collected in each Minnelusa injection zone for laboratory testing to determine the porosity, effective porosity and permeability of the injection zone.

Dewey-Burdock Project Manager and local rancher Mark Hollenbeck who has been involved with the project shortly after its inception 14 years ago says that he was pleased at the news of the permit approval. “We were confident of the science that suggested the project was safe,” said Hollenbeck. “And we felt certain that the permit would ultimately be approved.”

With regard to the required testing and monitoring, Hollenbeck says that Powertech will perform continuous testing as well as use outside sources to complete testing to meet regulatory requirements. Hollenbeck says that the company has alternative disposal plans in the event that deep disposal is shown to be “not viable” according to test results.

Hollenbeck shared that the extracted uranium would be used in electric power generation and that the need for carbon-free electricity has become more evident in the past 12 years as the science around global warming and climate change pushes policy toward a low-carbon future. He says the relative abundance of uranium along with the ease with which it can be used in a fission reactor make it a highly sought source of nuclear energy.

The project has had its critics from the outset. Among them are Lilias Jarding, Co-coordinator with the Black Hills Clean Water Alliance who suggests that some issues have likely been overlooked. Jarding cited fractured rock and unreclaimed mining sites in the project area as primary concerns that have yet to be addressed. Jarding also mentioned the presence of boreholes which are exploratory drilling holes that were either partially re-plugged or received no reclamation efforts at all that date back prior to 1972. According to Jarding, there are three old mines and thousands of boreholes on the proposed project area that would need to be located and assessed.

Hannan LaGarry, a retired geologist who worked for the Nebraska Geological Survey after completing his doctoral work on the geology of northwest Nebraska and southwestern South Dakota, pointed out that the formations containing uranium run from the base of the Black Hills down into the Nebraska Panhandle. As a survey geologist he mapped faults and fracture zones associated with the Black Hills uplift and expressed his concern about these geological characteristics and their inability to contain mining fluids.

“You can see these faults and fractures from outer space,” said LaGarry. “And people can even see them from Google Maps.” LaGarry went on to say that as an instructor at both Chadron State College and Oglala Lakota College he assigned students the task of using Google Maps to map lineaments of fractured areas in both Nebraska and South Dakota where uranium mining has been conducted.

LaGarry says that a big problem with the Dewey-Burdock mine is all the boreholes referenced by Jarding that were drilled in the proposed project area decades ago. He says that 7,500 such drillings leave a legacy that the present mining interest cannot overcome. Most of these boreholes which date from times when monitoring and other environmental protection regulatory measures simply didn’t exist, were unmapped and many were left open, making containment impossible.

“What Dewey-Burdock has is all these open holes with uranium mixing between aquifers,” informed LaGarry. “And eventually this uranium becomes released into other underground water sources.” He adds that the chemicals used in the extraction process exacerbate leaching and movement of uranium and also mercury. “There’s not just one thing in the water, but two things,” he says in reference to mercury present in the same deposits.

LaGarry also points out that the presence of caves in the Southern Black Hills speaks to how porous the region is beneath the Earth’s surface. He says that even aside from wasterwater disposal, extracting the uranium presents a problem because injecting the necessary chemicals creates a vacuum effect that leads to extraction chemicals being sucked into other underground water sources.

“There are people south of Hot Springs using water from the aquifer that is proposed to use for injecting wastewater,” stated LaGarry. “The consequences of this project under the existing circumstances will result in a toxic slurry finding its way to other groundwater sources.”

Jarding elaborated on LaGarry’s aquifer concerns and said the Dewey-Burdock project “would impact the Inyan Kara aquifer, the Minnelusa aquifer, and the Madison aquifer. These are three of the four potential drinking water aquifers in the Southern Black Hills,” she said.