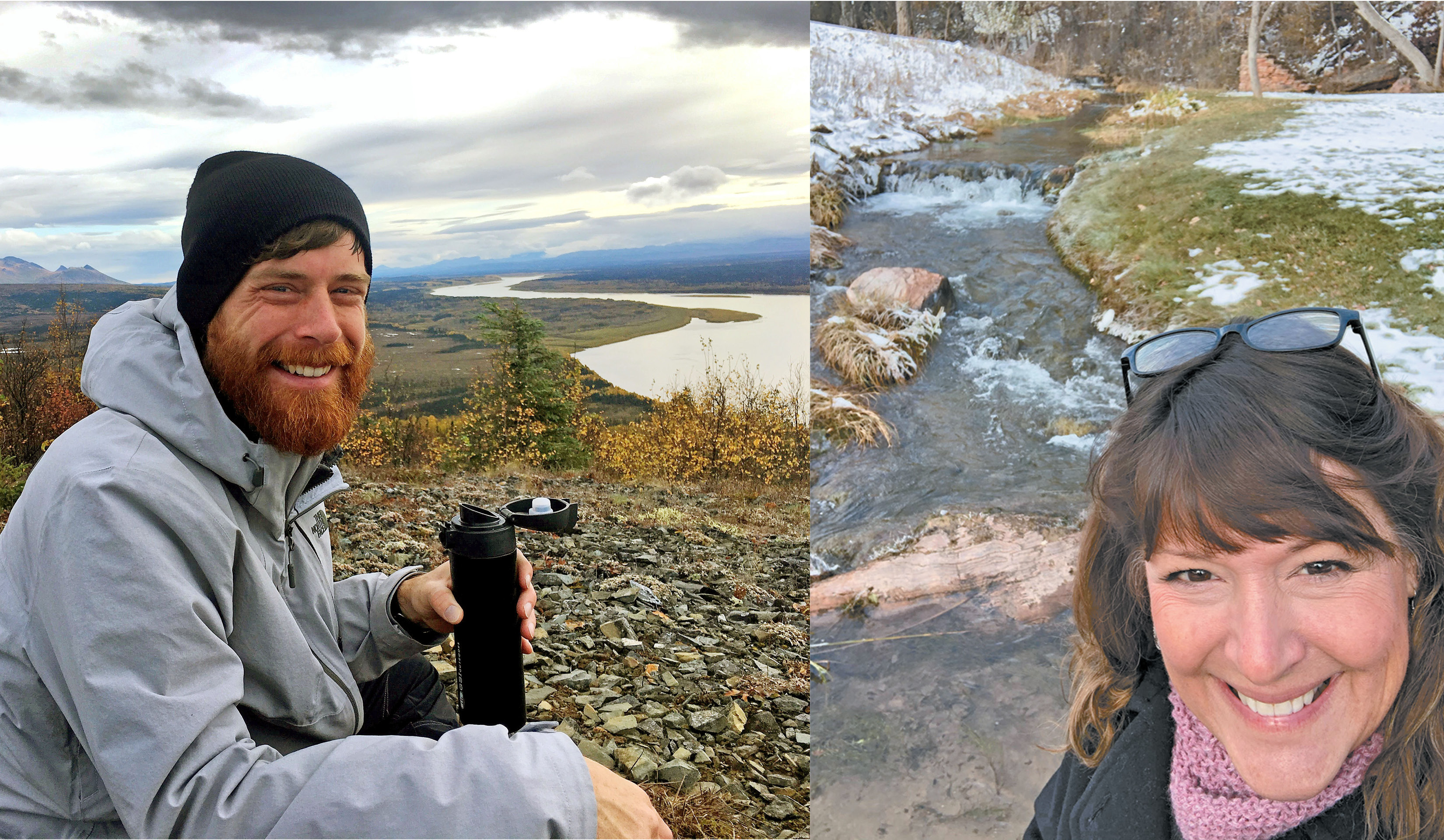 On left, this photo of new Fall River County Herald-Star correspondent Marcus Heerdt was taken in Alaska along the Kuskokwim River with the Russian Mountains in the background. On right, another new Fall River County Herald-Star correspondent Charity Maness is shown here also pictured by a river, but one a little more familiar to area residents , as it winds through Chautauqua Park near Hot Springs.

HOT SPRINGS – Earlier this month marked the third anniversary of the expansion of the Edgemont Herald-Tribune into the Fall River County Herald, and also the first anniversary of the Herald-Star merger following the purchase of the Hot Springs Star by Scherer Publishing.

The Scherer’s family-owned company includes husband and wife Bob and Mandy Scherer of Martin, who are both originally from Custer. Mandy was the longtime business manager of the Bennett County Booster in Martin, before taking over as the owner in October 2018. The couple also owns and operates the Todd County Tribune (Mission), Mellette County News (White River) and the Sheridan County Journal-Star (Gordon, Neb.).

Previously, the Hot Springs Star was owned by Lee Enterprises, Inc., which is currently the fourth-largest newspaper group in the country, which includes the Rapid City Journal as well as 74 other dailies and 350 weeklies and specialty publications in 26 different states.

The transition of operation of the Star in December 2019, from the Rapid City Journal to the Scherer family, made complete the joining of more than 230 years of combined history between Edgemont’s and Hot Springs’ newspapers. The Hot Springs Star was established in 1886, while the Edgemont Herald-Tribune has a history that includes the Edgemont Tribune from 1923 to 1959, and the Herald-Tribune from 1959 to 2017.

In the newspaper’s ongoing effort to bring informative and entertaining stories to its ever-growing readership, the Herald-Star recently added a pair of new writers in Marcus Heerdt and Charity Maness.

Heerdt joined the newspaper in June 2020 and soon took on one of his first assignments which was to develop a series to highlight the people behind the names of many of the area’s buildings, landmarks and atteactions. This now-regular monthly feature is called “Naming Writes” and has quickly become very popular with readers of the newspaper.

A Minnesota native, Heerdt moved to South Dakota after high school and graduated from South Dakota State University in 2011 with a degree in history. Since then, he has taught 6-12 Social Studies in South Dakota, Minnesota, and Alaska.

He is an avid outdoorsman and loves to hike. He is the author of the upcoming book by Falcon Guides Hiking the Black Hills Country, Third Edition. His hiking adventures have taken him to each of the fifty states as well as faraway places such as Yukon Territory, Spain, Russia, and Kyrgyzstan.

Heerdt likes taking pictures and writing stories about his adventures. His works have appeared in books, newspapers, magazines, and online publications. In his free time, he enjoys being near water swimming, kayaking, waterskiing, and fishing.

“I have been writing for newspapers as a side job for 15 years and am excited to be working for the Herald-Star,” Heerdt said. “I love the community of Hot Springs and the people here. It is a great place to live and work.”

Maness moved to Hot Springs recently from Northern California, where she said her surroundings were somewhat similar to the Black Hills, including winter storms which could bring two to four feet of snow, along with wildlife like deer and mountain lions, but also bears as well.

She began her journalism career in 2009 in the Sierra Foothills of Northern California as a humor columnist with the Pine Tree, where she poked fun at small town life with a column titled “Welcome to the Country.”

“Soon writing took on a life of its own and I published my first book, ‘From Positive Test to Empty Nest,’ a humorous –tongue in cheek-journey through motherhood in the ‘90s,” Maness said. “After all, if you can’t laugh your way through child rearing, you may just not survive.”

Soon afterwards, Maness said The Calaveras Enterprise, a competing newspaper caught wind of her wordsmith skills and she was off into the world of “real news,” which included on-scene fire coverage, concerts, school plays, car accidents, murder trials, and more. “The fun and varied life of a journalist,” she added.

“As if writing for one paper was not enough, I began writing special sections for the Sierra Lodestar, a monthly local county visitor brochure as well as writing historical pieces for the Calaveras County Historical Society,” Maness said. “But I was not one to stop writing. I discovered I truly loved research and veterans. With the help of a good friend, we began a Veteran Treatment Court, a Veteran Day Parade and a VFW in our community. This was my portal to penning military history books. The more I talked with veterans the more I wanted to learn and the more I felt the world should know; know life from their perspective, not from what has been deleted from history. Hence I have two published non-fiction military history books, both with emphasis on Vietnam.”

In addition to writing, Maness said she loves touring the area on the Harley, photography, knitting, spinning, crocheting, quilting and making clothes and gifts for her many grandchildren.

“I landed in Hot Springs with my best friend by my side on July 4, 2020, my independence day,” she said. “On my first visit to the town last year, I fell in love with the people, the genteel nature and open kindness was an absolute breath of fresh air. Then I explored a little and fell in love with the entire Black Hills. This, my friends, is truly God’s country. I am so thankful to be part of an excellent journalism team and part of this wonderful community.”

Other correspondent writers, in addition to Heerdt and Maness, include: Cathy Nelson, who covers Fall River County Commission; Peggy Sanders, who writes the historical 60 Years Ago & 90 Years Ago column along with another weekly column entitled Rangeviews; Dick Kettlewell, who writes and takes the photography for the monthly Fall River Rhapsody feature; and, Eric Boyd, who assists with both news and advertising.

Eric Harrold is also a part-time staff writer and manager of the Edgemont newspaper office. He has been with the newspaper for one year.