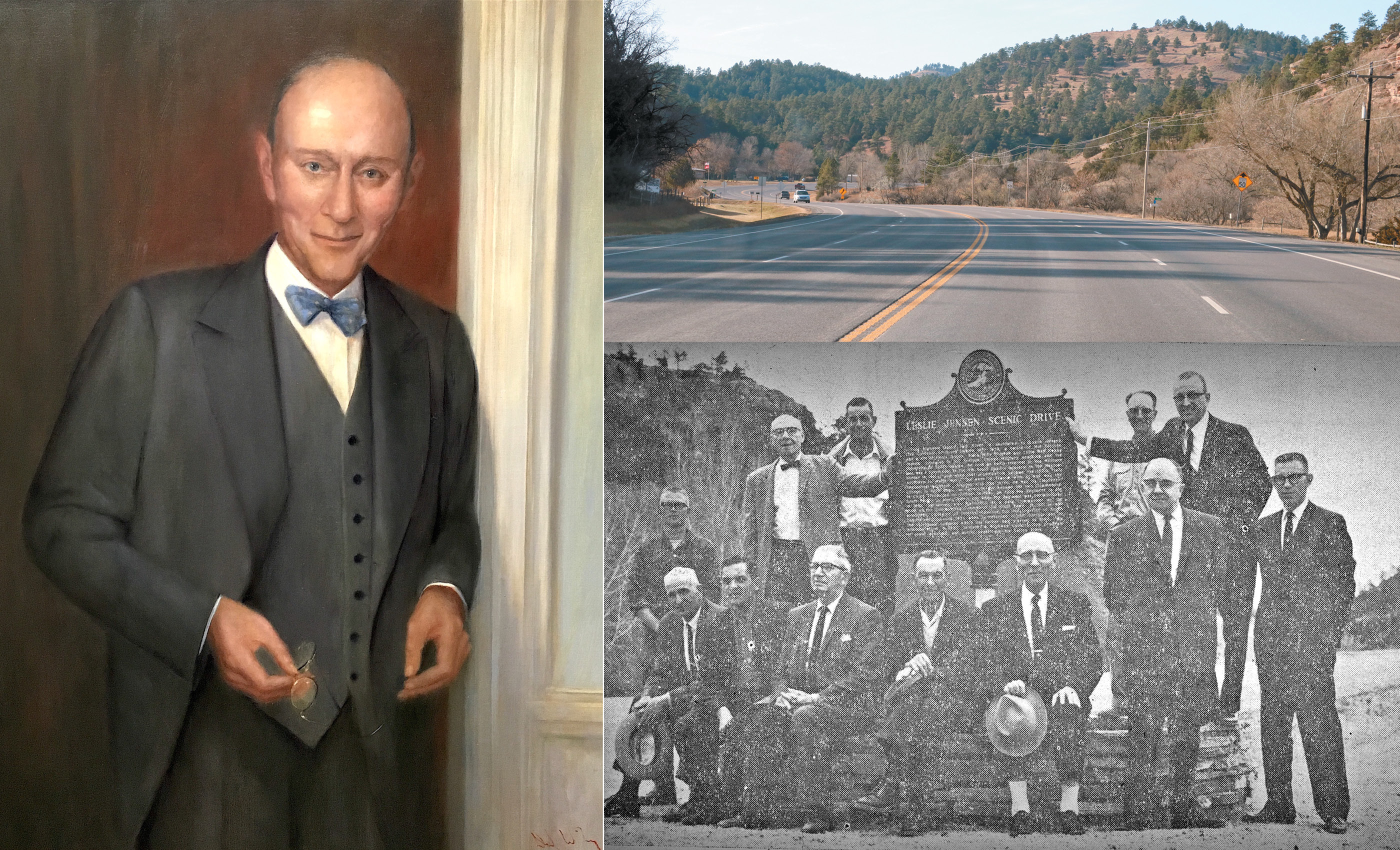 On left is the official portrait of Former Governor Leslie Jensen that hangs in the South Dakota State Capitol in Pierre. Former Governor Dennis Daugaard and two of Jensen’s children unveiled this new portrait in a small ceremony in 2016. (Photo by Tony Venhuizen, Chief of Staff to Governor Kristi Noem)

The photo in the lower right is from May 1963 and shows former governor Leslie Jensen (sitting center with light-colored hat on his right knee) after volunteers completed work on planting more than 3,000 trees and other greenery along the Leslie Jensen Scenic Highway.

Publisher’s Note: This story about the Leslie Jensen and Jensen Highway is the next in an ongoing series of stories by the Fall River County Herald-Star to highlight the history of the people behind the names of many of our county’s buildings, landmarks and attractions.

HOT SPRINGS --- On Dec. 11, 1964, Leslie Jensen, Hot Springs native and 15th governor of South Dakota, was involved in a serious automobile accident between Rapid City and Hot Springs on State Highway 79. While rounding a curve, a semi-truck slid off the road, crossed the median, and struck Jensen’s vehicle. The former governor was rushed to St. Johns-McNamara Hospital in Rapid City where he underwent surgery. Jensen died three days later on Dec. 14 at age 72.

In Pierre, then-governor Archie Gubbrud said, “We’re shocked and saddened to hear of the death. I feel that I have lost a close personal friend and South Dakota has lost a great man. We’ll all miss him.”

Ironically, Leslie Jensen was known as “the father of the modern highway system in South Dakota,” and just two years earlier in 1962, a portion of U.S. Highway 18 between Hot Springs and Maverick Junction was dedicated to the former governor and officially named the “Leslie Jensen Scenic Highway.”

Leslie Jensen was born on Sept. 15, 1892, in Hot Springs to Christian and Lillie Jensen.

At age 13, his father Chris immigrated to the United States from Denmark. Chris eventually made his way to Sioux City, Iowa, and in 1875, he was a member of the Black Hills-bound Gordon Party (outfitted and transported by Fred Evans; as previously mentioned in Part 2 of this Naming Writes series), which was turned back by U.S. federal troops in northwestern Nebraska.

Chris eventually entered the Hills in 1876 and came to Hot Springs in the 1890s. He opened a stage company that offered regular routes to Cascade Springs and Wind Cave, started the Peoples Telephone and Telegraph Company, served as both mayor and sheriff, and built the Blue Bell Lodge in Custer State Park.

As a young man, Leslie often seemed to get himself into trouble. At age 15 he appeared before the county judge for “cutting and marring a tree in one of the streets of Hot Springs.” And at age 18 while repairing one of his father’s telephone lines, Leslie fell 25 feet down “with great speed” from the top of a telephone pole. He was found on the ground unconscious, but was quickly revived and taken to the hospital.

After schooling and then working at the telephone company for a while, Leslie joined the South Dakota National Guard 4th Infantry Regiment and was sent to the border with Mexico in 1916 as part of the Pancho Villa Expedition.

By 1918 Leslie rose to the rank of captain and served with the 147th Artillery Regiment. During World War I, he was sent overseas to Europe as part of the American Expeditionary Forces (AEF). Captain Jensen participated in the Battle of Chateau-Thierry, one of the first battles for the AEF, and the Argonne Forest Offensive, the last major series of battles in the war.

After the war, Leslie returned to South Dakota and enrolled in law school at the University of South Dakota. He graduated with his degree in 1921 and in 1922 was appointed South Dakota’s Internal Revenue Collector, a job he held for 12 years. At this time, Leslie was living in Aberdeen, S.D. It was in Aberdeen where he met his wife, Elizabeth Ward, and the couple married on Dec. 19, 1925.

In 1936, Leslie was urged to run for governor of South Dakota on the Republican ticket against the Democratic incumbent, Tom Berry, who was seeking a third term. Leslie accepted the challenge and won against Berry by 9,000 votes.

Leslie was inaugurated in 1937 and became the 15th governor of South Dakota during a very difficult time in the country. Economic depression, drought, and numerous other problems plagued the nation and the state.

From 1937-39, the Jensen administration completed the first paved road across the entire state (Old US Highway 16), restored the gas tax to pay for road improvements, balanced the state’s general fund and reduced the debt, provided much-needed credit to farmers, and officially made Badger Clark the first poet laureate of South Dakota.

Leslie was also the first South Dakota governor to reside in the newly built governor’s mansion in Pierre, a project that was begun by the previous governor, Tom Berry.

Joking about the high price and large size of the mansion, Leslie said, “There are six bathrooms in this governor’s mansion that Tom Berry built for me, and I can only use one. Now, my friends, when I move in, I want all of you to feel free to come in and take a bath when you come to Pierre.”

Although the Republican Party encouraged Leslie to run for a second term as governor, he chose to run for U.S. Senate, but was defeated in the primary by John “Chan” Gurney.

After his defeat, Leslie returned to Hot Springs and worked at the telephone company, but was hastily called away again into another world war.

Leslie, now a colonel in the 147th Artillery Regiment, was sent to the Pacific Theater of Operations. In 1941, Leslie was on his way to Pearl Harbor; however, his company was diverted to Australia when the Japanese attacked the base.

Leslie spent a short time commanding an outpost in the jungle of New Guinea but while there, he contracted malaria and became very ill. Because of this, he was reassigned to General Douglas MacArthur’s headquarters in Australia, where he served as a staff member in the Sixth U.S. Army.

However, still plagued by illness, he was sent back to the U.S. to be hospitalized, and was honorably discharged from the military in 1945. He then returned to Hot Springs for the rest of his life and resumed his work at the telephone company.

In the early 1960s, the five-mile stretch of U.S. Highway 18 between Hot Springs and Maverick Junction needed to be reconstructed and widened because “the road was tortuous and subject to rock slides.”

Governor Archie Gubbrud attended the dedication ceremony and stated: “Jensen is largely responsible for the state’s present highway system which is the pride of South Dakota and the envy of the nation. The Leslie Jensen Scenic Drive is appropriately named.”

Later that evening, a capacity crowd filled the dining room at the Evans Hotel for a public dinner honoring former governor Jensen.

Just two years after the dedication of the highway, Leslie Jensen, a man who survived two world wars, severe illnesses, and many other hardships in life, died from injuries sustained in an automobile accident between Rapid City and Hot Springs. He is buried in Evergreen Cemetery in Hot Springs.

Funeral services for “Lovable Les,” known to have a twinkle in his eye, originality, wit, and a kind sense of humor, were held at the United Churches in Hot Springs on Friday, Dec. 18, 1964.

Hot Springs Mayor D.D. Hagen ordered all businesses in town to close that Friday afternoon in honor of one of the city’s “most illustrious citizens.”

The Hot Springs Star reported: “Hot Springs has sustained an irreplaceable loss in the death of Gov. Leslie Jensen. Rarely does a community have among its citizens a man who contributed as much as did Gov. Jensen. Yes, Gov. Jensen, Col. Jensen, or Les, or by whatever name he was called, has left a mighty big void in the community of Hot Springs.”

At the hospital after the automobile accident, a healthcare worker found a piece of paper in Leslie Jensen’s coat pocket. What was written on it it was read aloud at Leslie’s funeral:

“Teach us, O Lord, the disciplines of patience, for we find that to wait is often harder than to work. We ask thee not for tasks more suited to our strength but for strength more suited to our tasks. Since we cannot always do what we like, grant that we may like what we must do.”

After his death, Leslie’s wife Elizabeth continued to work for the telephone company in Hot Springs until it was sold to Golden West in 1979.

In 1987, the Jensen’s home on South Fifth Street was added to the National Register of Historic Places for its “Victorian cottage architecture” and because it is “a nearly unblemished example of a style of architecture popular when [former governor Jensen] was growing up in Hot Springs.”

Until 2016, Leslie Jensen’s official portrait in the South Dakota State Capitol building was that of an elderly man in his 70s sitting in an old wooden chair. Members of the Jensen family, including Leslie Jensen, Jr., led an effort between the years 1990 and 2014 to replace the portrait with one that would be “painted to reflect a more energetic, enthusiastic, and younger Jensen.”

In July of 2016, two of Leslie Jensen’s children unveiled their father’s new official portrait on the first floor of the Capitol building. The portrait, painted by artist David William Terry of Oregon, shows “the wry smile the children recalled from his days as governor,” said Leslie Jensen, Jr.

The following year in 2017, a life-size statue of Leslie in his WWI uniform was placed along the Trail of Governors, which runs from the downtown area in Pierre to the Capitol. Leslie’s statue, created by James Van Nuys of Rapid City, stands in front of the Soldiers & Sailors World War Memorial across the street from the Capitol building.

Both the official portrait and statue of Leslie Jensen feature and pay close attention to the former governor’s eyes. Even after death, it would be safe to assume that these two lasting pieces of art will ensure “that twinkle never leaves his eyes.”

Thank you to Tony Venhuizen, Chief of Staff to Governor Kristi Noem for his contribution to this story. Information and photos for this article obtained from: the books “Early Hot Springs,” and “Fall River County Pioneer Histories,” newspaper archives, and the Helen Magee Collection.