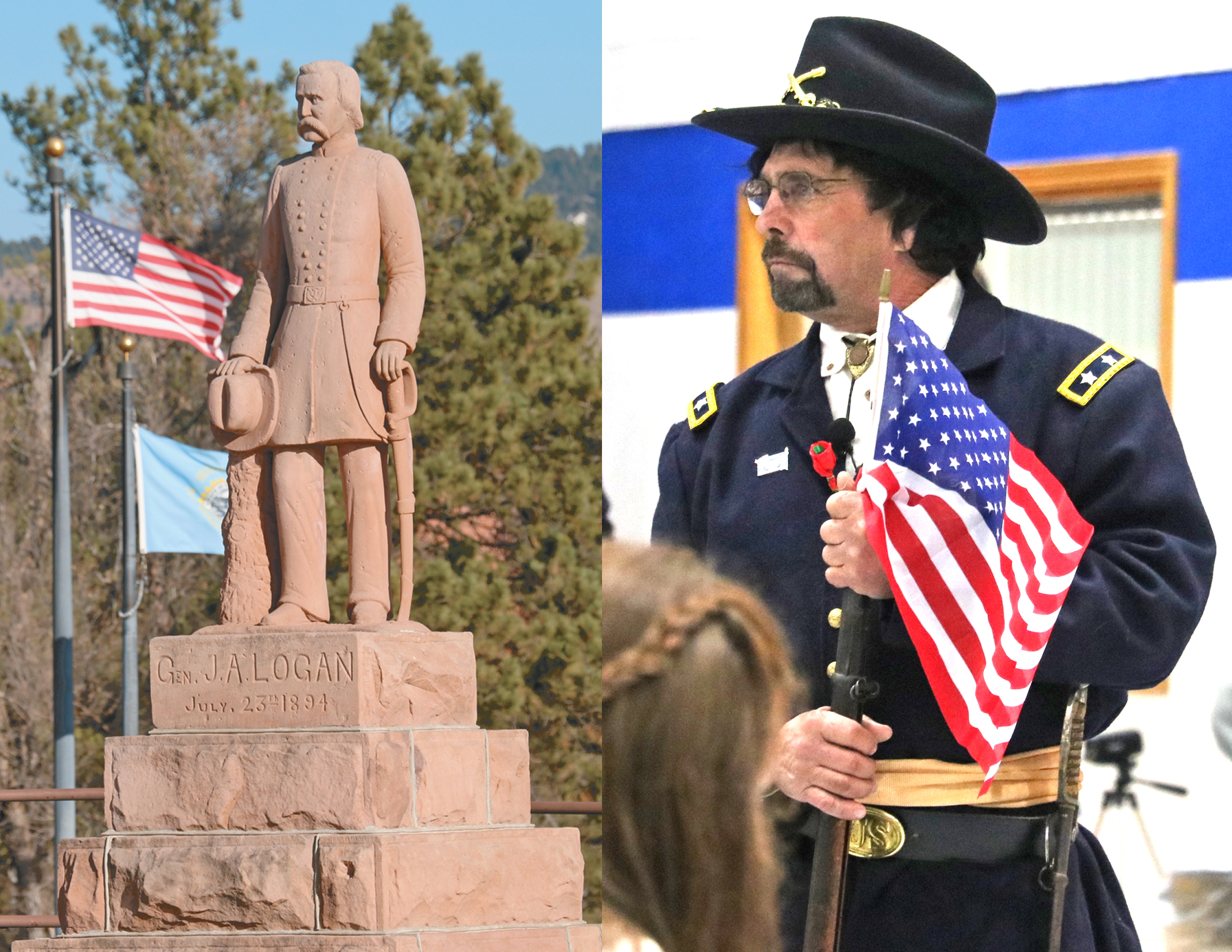 State Veterans Home Physical Plant Manager Ton Inman, right, portrayed Civil War General John Logan during the Veterans Day program at Case Auditorium last week on Wednesday, Nov. 11. General Logan, who is memorialized in a statue on the campus of the State Veterans Home (left) was instrumental in making Hot Springs known as “The Veterans Town” by helping bring both the State Home and VA Medical Center to the community.

HOT SPRINGS – Like many other things in this COVID-19 era, the 2020 Veterans Day program put on by the student body of the Hot Springs School District took on a very different look this year. However, the meaningful message expressed by the students and the featured speaker was no less significant, despite having far fewer attendee in-person inside Case Auditorium.

Typically with bleachers and on-court chairs filled to capacity, seating was limited and spaced out to provide social-distancing. Community members and area veterans were able to view the event by livestream this year, which is a new service being provided by the district for sporting and other events.

In addition to musical performances by the 5th grade, middle school and high school choirs and band, as well as the Lakota Flag Song performed by Quincy Good Star, the program also featured guest speaker Tom Inman, who portrayed Civil War General John Logan (1826-1886), who was instrumental in initiating the observance of Memorial Day and in finding homes for Civil War veterans. He was also one of the men most responsible for the establishment of the State Soldiers Home and Battle Mountain Sanitarium being established in Hot Springs.

Inman, himself, was born and raised in Hot Springs and enlisted in the service in 1972, before moving back to Hot Springs and raising his family. He has been an employee of the State Veterans Home for the past 15 years.

As Gen. Logan, Inman said he volunteered with Union Army during he Civil War and led them in many battles. After the war, he went back to his home state of Illinois became a U.S. Congressman. He was also elected the leader of the Grand Army of the Republic (GAR), which eventually became known as the Veterans of Foreign Wars (VFW) and American Legion. At that time, its members were 500,000 strong.

In the 1880s, a need was determined to better serve the Civil War veterans who were living in the Dakota Territories. So an effort was taken up by General Logan and Captain William Lucas, who led the GAR of the Dakotas, to find a suitable home. Other communities that were considered included Watertown, Bismarck, N.D., Sturgis and Pierre. But it wasn’t unitl Capt. Lucas became ill and found his way to the Southern Black Hills to soak in the healing waters of “Minnekahta” that Hot Springs was considered.

After recovering from his illness in Hot Springs, Capt. Lucas and the rest of his party were convinced that Hot Springs should be the site of the Soldiers’ Home, and so they persuaded the powers-that-be to build it here in 1889.

A few years later, General Logan was again involved in establishing another veterans institution in the town of Hot Springs, when he helped pass legislation that eventually built the Battle Mountain Sanitarium in Hot Springs, which later became known as the Hot Springs VA Medical Center.

Following his presentation as General Logan, Inman then spoke of his experience of talking to local veterans. He said they all have three things in common, as to why they chose to serve their country in the military: Duty, Honor, Country.

“And what do they ask from us?,” he asked the audience of students. “Our respect. That is all.”