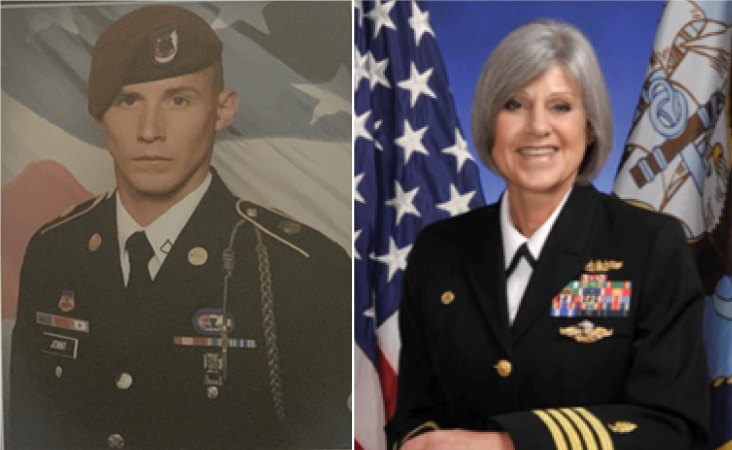 Guest speakers for the Edgemont Veterans Day Program were Joshua Joint (left) and Capt. Shannon J. Johnson (right). Joint enlisted into the Army on Jan. 11, 2011 as a Cavalry Scout. His military service spans just under seven years and includes a deployment to Afghanistan. Today he resides in California with his family where he works as a forestry technician. Captain Johnson has served in the U.S. Navy for the entirety of her distinguished military career. Over the course of five overseas deployments, Johnson’s personal awards include the Meritorious Service Medal (five awards), the Navy and Marine Corps Commendation Medal, the Navy Achievement Medal (two awards) and various others.

EDGEMONT – On Wednesday, November 11, members of the Edgemont community joined Edgemont School students and staff to commemorate Veterans Day at the St. James Parish Hall. The celebration of military service reflected the dedication and extra measure of fortitude by school staff and students who found themselves confronted by the restraints of the recent pandemic.

Students Shiloh Bean and Treyan Urban read a poem titled “A Soldier Died Today” as images of soldiers in combat were projected on the video screen.

‘Roll Call’ was a video presentation of gravestones of deceased Veterans buried in the Edgemont Cemetery.

“God Bless the U.S.A.” was performed by the High School Choir, with soloists Caleb Simons and Grant Darrow incorporating “America, the Beautiful.”

Senior Ryan Koupal asked that all attending Veterans be recognized and afterwards requested a moment of silence in honor of their service.

Elli Hollenbeck next read an essay detailing the Military’s history of humanitarian aid. Hollenbeck noted that between 1970 and 2000, there were 366 incidents to which military branches responded with relief and disaster assistance. More recently, members of the National Guard have been deployed to provide Covid-19 assistance.

Next, Caleb Simons introduced the first guest speaker, Captain Shannon Johnson, PhD enlisted with the US Navy in its Medical Service Corps.

Johnson began her distinguished military career at the Naval Medical Center in San Diego after earning her PhD in Clinical Psychology from Rosemead School of Psychology in La Mirada, California. Following her internship year in 1998, she served multiple deployments in diverse locations up until 2013 when she was selected to provide oversight for the full range of Inpatient and Outpatient Mental Health and Substance Abuse Rehabilitation Services as the Director of Mental Health at the Naval Medical Center Portsmouth. In August of 2019, Johnson assumed command of the Naval Hospital in Bremerton, Washington where she continues her military service.

Johnson shared that she has experienced the same mental health challenges brought on by active duty service that she routinely treated others serving in combat and those returning from deployment. Returning from deployment, she found herself numb and having a hard time with a wide range of feelings. “Everybody’s deployment is different,” said Johnson. “So much happens when we’re apart and we need time to adjust to those changes.”

Johnson responded to a question she received from an Edgemont student about what she had learned about herself from her military service. “I learned that I need to feel challenged and need to learn new things,” she said. “I’ve learned that I’m a leader and this resulted in my receiving increasing responsibility.”

Kali Schmidt, Caleb Simons, and Carly Stokes read excerpts of “A Letter to a Soldier”, which included the acknowledgement that many people neglect to say “thank you” to service members and veterans.

After a brief intermission, members of the Middle School Choir sang “My Country T’is of Thee” which was followed by Grant Darrow’s introduction of the second guest speaker, Sergeant Joshua Joint of the United States Army, who currently resides in California, with his wife and two children.

Joint cited 9/11 as a motivational factor for his generation of service members. He spoke of the camaraderie among those deployed together and said that what a lot of people don’t think about is the “down time” during a deployment and the bonds built between someone and their fellow service members.

Joint spoke at length about the memorable experiences of each juncture of his military service, pointing out that the people he met along the way were people he remained in touch with to the present day.

Like Johnson, Joint referenced the challenges faced by those returning from deployment, stating, “finding yourself again when transitioning to a ‘normal’ society is a challenge.” He encouraged those wanting to do something for service members to think about Veteran suicide. “Its hard in many cases for veterans to make sense of life on the outside,” said Joint.

The program concluded with a photo presentation by video of Edgemont Veterans Past and Present and a “thank you” from Cadence Hyatt.