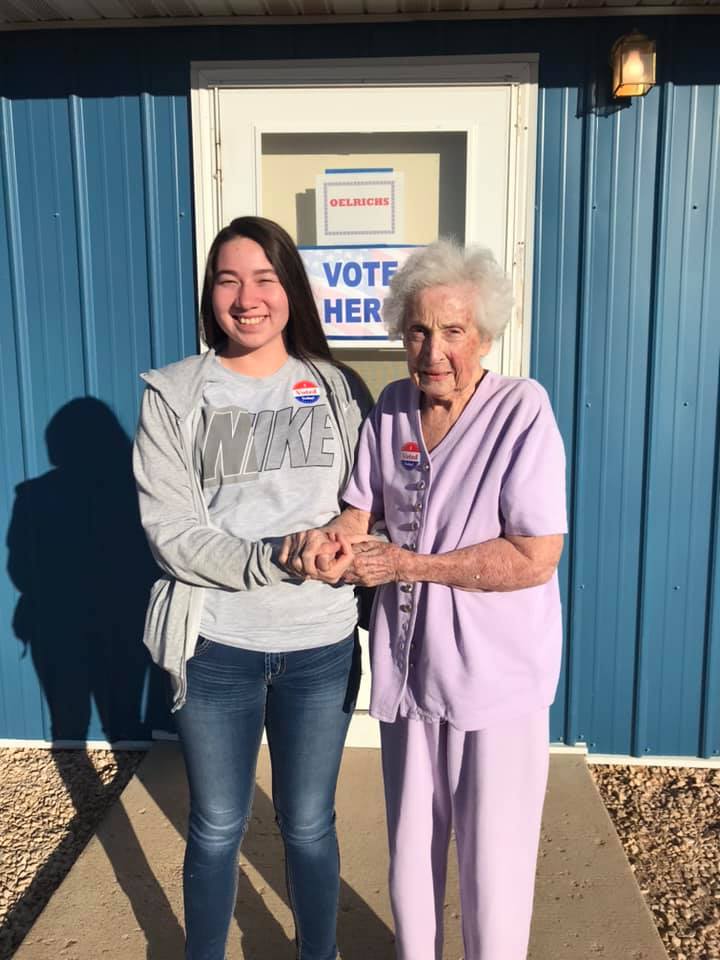 This year’s General Election in Fall River County brought out voters of all ages, including 98-year-old Lois Putnam and her 18-year-old great-granddaughter Jada Rouillard, who was voting for her very first time. Both are from Oelrichs and registered their votes at the Oelrichs Precinct on Election Day, Nov. 3.

Overall, there were 4,075 ballots cast in Fall River County, which represents a 74.3 percent voter turnout. This number was just slightly higher than the statewide voter turnout of 73.88 percent.

The Fall River County precinct expressing the widest margin of victory for Trump was in the Oral area (Beatrice) with 89 percent (131 votes). The precinct showing the most support for Biden was Hot Springs’ Ward 3 where he received 35 percent of the vote.

For the U.S. House of Representatives seat, the percentages were identical when comparing Fall River County and South Dakota, with 81 percent supporting Republican Dusty Johnson compared to 19 percent for Randy “Uriah” Luallin, who is a Hot Springs resident.

All three of the statewide ballot measures passed and received similar support statewide as they did in Fall River County.

Constitutional Amendment A, which legalizes, regulates and taxes marijuana and also requires the legislature to pass laws regarding hemp, as well as laws ensuring access to medicinal marijuana, passed 54 percent to 46 percent. In Fall River County, the measure passed 52 percent to 48 percent.

Constitutional Amendment B, which aurthorizes the legislature to allow sports wagering in Deadwood, passed statewide 58 percent to 42 percent. In Fall River County, it passed 57 to 43.

Initiated Measure 26 which legalizes marijuana for medical use, passed 70 percent to 30 percent. In Fall River County, in passed 64 to 36.

Fall River County voters also had a pair of District 30 State Legislative races on their ballots.

For District 30 House of Representatives, Republican incumbent Tim Goodwin and Republican newcomer Trish Ladner were the only two on the ballot for two seats, so both made it in. Hower, Ladner, who resides in Hot Springs, earned slightly more district-wide votes than Goodwin, 51 percent to 49 percent.