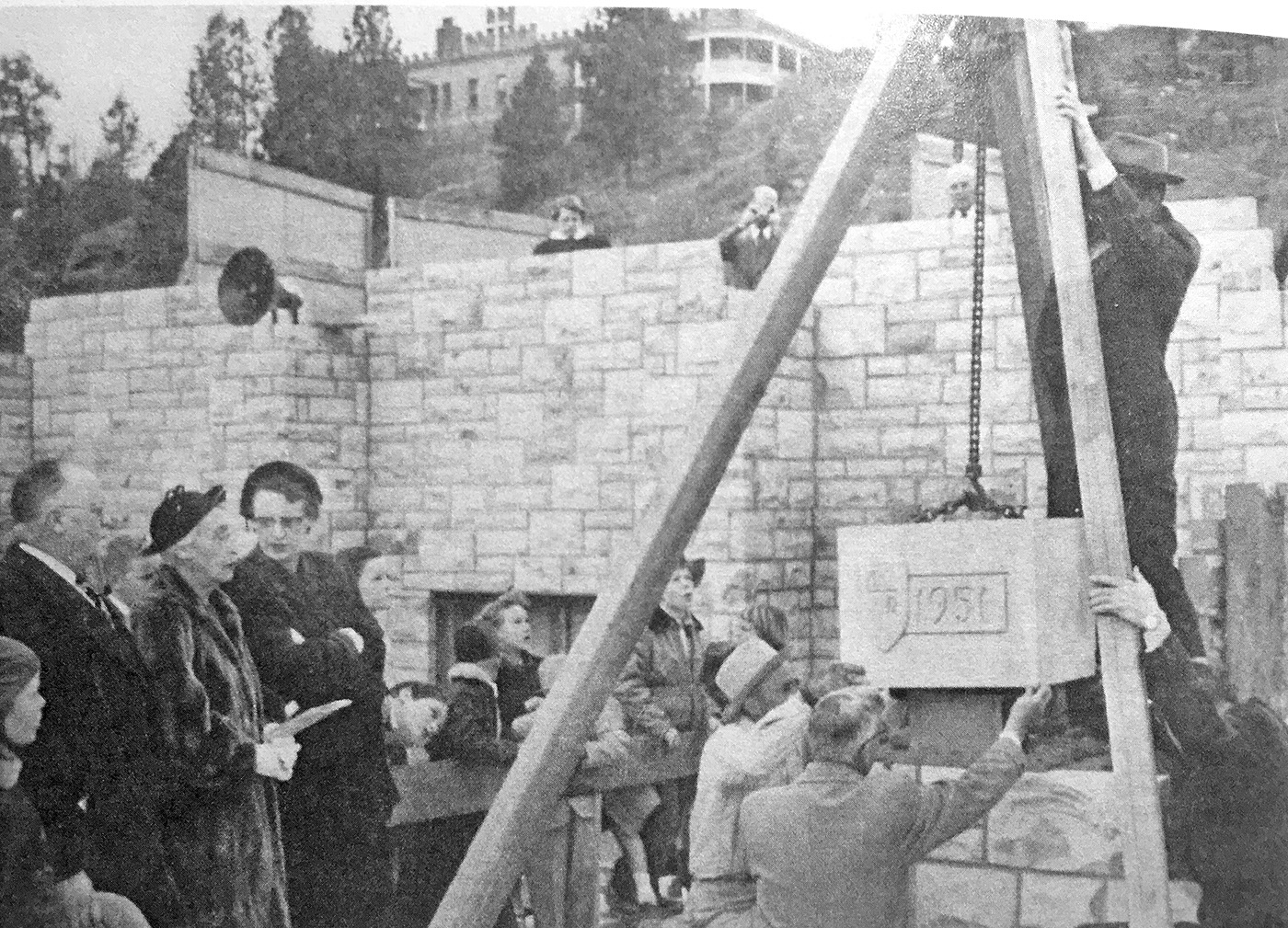 Because Dec. 2 was the Sunday nearest to the 31st anniversary of the organization of The United Churches in 1951, that date was chosen for the ceremony of laying the cornerstone of the new church. (Courtesy photo)

HOT SPRINGS – The United Churches of Hot Springs has survived the test of time, weather and turmoil to stand tall filled with the grace of God 100 years after its inception.

Earlier this fall, the church utilized the more mild weather to celebrate its 100th anniversary with an event at the church. While the event was held in September, the church’s actual anniversary date will be celebrated later this month, based on the adoption of the constitution on Nov. 28, 1920.

According to information gleaned from writings by Carol Nelson and Jerry Collogan in a recently published history booklet about the church entitled “100th Anniversary 1920-2020,” it wasn’t long after the Dakota Territory was formed that organized religion found a comfortable home in the Black Hills.

By 1883 the first religious services were conducted by the Methodists along the banks of the Fall River. Yet, with the onset of the prolific sand quarry, the Methodists’ were able to hold their first services in their newly constructed church in 1887.

The same year the Dakota Territory divided in 1889 the First Presbyterian church was formed in Hot Springs followed a couple years later by the Baptists.

When the world erupted into war in 1914, creating hardship and fuel shortages, followed by the 1918 Spanish Flu which ravaged the world, the multiple churches growth slowed, pastor’s were called elsewhere and the community of  Baptists, Presbyterians and Methodists knew it was time for a change.

A ‘rules committee of ten’ were selected to join the three denominations together as a united group creating a constitution of sorts providing a solid foundation that has embraced the community at large for one hundred years.

In 1920 the three denominations joined together to celebrate the glory of God under one roof, thus holding the first inaugural service of the United Churches held in the Presbyterian Church at Happy Hollow. This union was overseen by Methodist minister Reverend B.F. Donovan, Baptist Sunday school superintendent George L. Havens and Presbyterian director of music Pearl E. Glattly.

In the fall of 1920 the church family opened their arms to yet another denomination and invited the Riverside Church of Christ, without a pastor, to join them in worship. This group celebrated Christ with The United Churches until 1922 when a pastor was found for their congregation.

Unfortunately, the ‘war to end all wars’ was not to be and the world was not to see peace for long as it was thrust into war again in 1939 on the heels of the Great Depression.

Undaunted by the world at large, The United Churches began envisioning a new church building.

Unable to secure loans from financial institutions, the funds needed to come from the congregation, thus began the first drive to raise funds in December 1945 to build on the site of the former Methodist Church. The congregation showed their generosity and determination and on December 3, 1950 a ground breaking ceremony was held for the new church.

December 2, 1951, the cornerstone was laid carrying contents within a copper box such as: a Holy Bible, United States flag, copy of a November 29, 1951 Hot Springs Star newspaper, prayer hymnals, letter appealing for funds to build the church dated 1947, building fund pledge, Sunday school booklet titled “And so the wall was built”, and much more.

As the cornerstone was being laid, the congregation sang hymns such as; Rock of Ages, The Church’s One Foundation and Blest Be the Tie.

Soon after the cornerstone was laid construction of the church began in earnest with repurposed sandstone from the old Hot Springs airport hangar with additional sandstone quarried from church member Chatta Cleaver Eastep’s ranch with the first service to be held in the new sanctuary April 15, 1954; Maundy Thursday.

As the church congregation grew, so did the churches land holdings with gifts of lots adjoining the church property in 1955 from Mr. and Mrs. Thomas McColley.

A historical dedication ceremony of the United Churches was held April 15, 1956.

In the late 1800s, a church bell was donated to the Methodist Church from Fred Evans. This bell was brought from Sioux City, Iowa, in a cart pulled by an oxen team.  It was installed in the Methodist Church belfry which was built in 1887. In 1953 the bell was moved to the belfry of the United Churches. However, by 1974 it was determined that the belfry could no longer bear the weight of the 500 pound bell and the bell was taken down and placed in the church yard.

Building a new belfry was financially not feasible at the time, yet electrifying the bell with timing and ringing equipment and building a small tower in front of the church for the bell was made possible due to a financial gift bequeathed to the church in the memory of lifelong Methodist members Mr. and Mrs. E. E. Wright.

Community outreach has been and remains an integral part of The United Churches philosophy. Throughout their hundred years they have held Sunday school, youth groups, bible studies, mission trips, sponsored Boy Scout Troop #23, offered free meals, embraced music through choir and clothed those in need.

To this day, as part of their original ‘constitution’ each church member retains their own religious identity; Methodist, Presbyterian or Baptist with pastors of each denomination rotating on a five year basis.