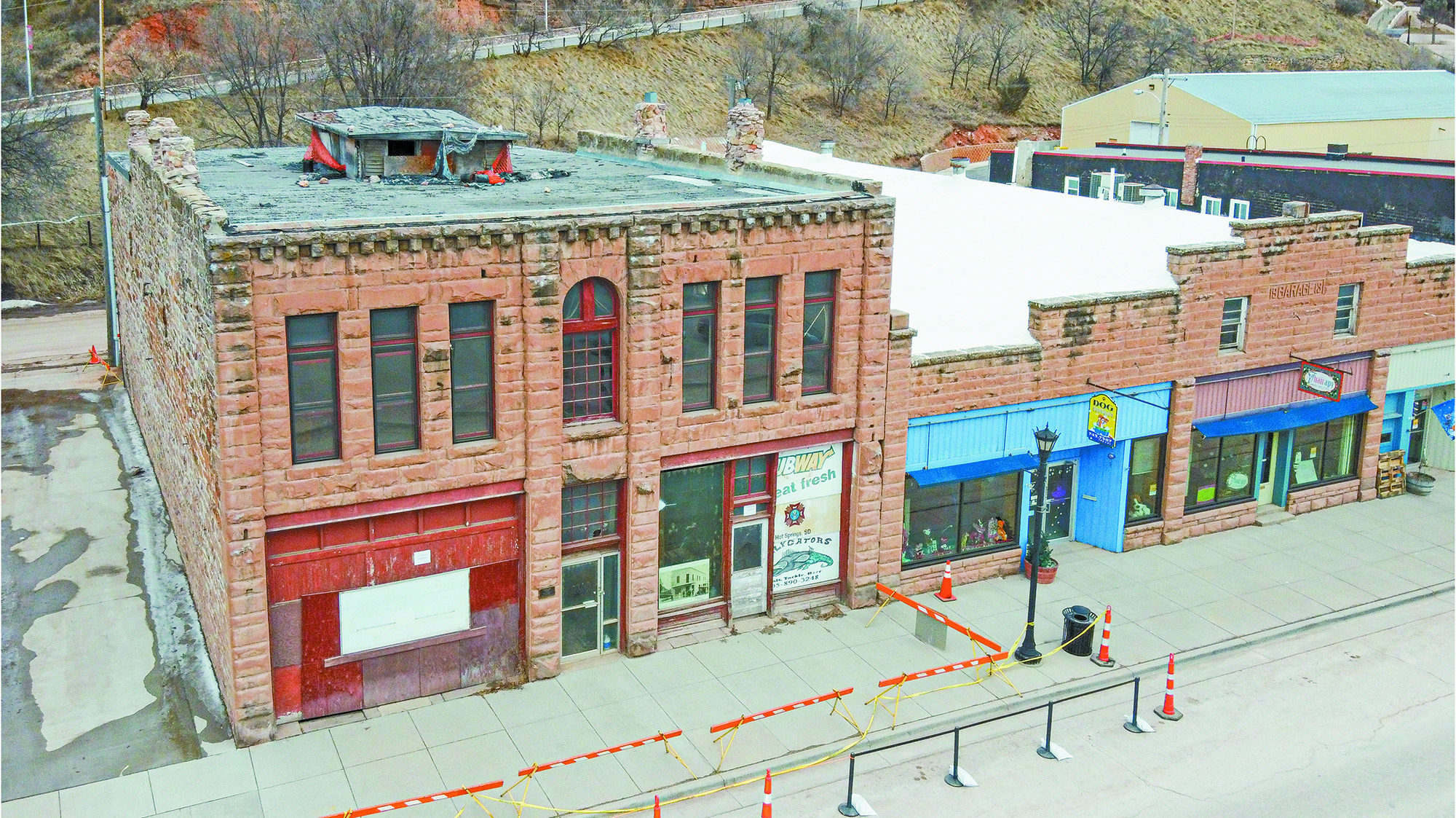 This photo, taken on Feb. 2, 2020, shows an aerial perspective of the condemned Wesch-Oak Building, on left, which the City of Hot Springs is currently trying to solicit bidders to purchase and save from demolition.

HOT SPRINGS – When the Wesch-Oak building, located at 717 North River Street in downtown Hot Springs, was condemned earlier this year by the City of Hot Springs due to severe structural concerns, an effort began to find a private individual or organization who would take on the responsibility to save the building from demolition.

While a new owner has not been found yet, there has been some progress made.

According to City Administrator John Gregory, there has been a total 10 parties who have responded to a statewide advertisement placed by the city, which entices would-be purchasers to “Own A Piece of South Dakota History!” The ad, which was published in September, further stated, “this historical building was constructed in 1893 and is a vital part of Hot Springs’ sandstone history. Due to neglect by owners, the building is in dangerous condition and is need of stabilization and insurability by April 2021.” The initial deadline for parties to contact the city to show their interest was Friday, Oct. 23.

Gregory said on Monday, Oct. 26, that of the 10 inquiries they have received, two of them are considered “serious inquiries,” and would be good candidates for possibly purchasing the building as-is through a Sheriff’s Sale. He said one of the serious inquires are local and another is from out of town.

When each of the inquirers have contacted the city, Gregory said they have been sent “prospective” bidder information and a copy of the most recent engineering evaluation report on the building. The current amount of back taxes owed on Wesch-Oak Building, including the October payment is $8,565.33. Each month that it is unpaid it accrues an additional $48.72 of interest on the 1st of the month. At this juncture the “back-taxes” can’t be abated without County Commission authorization.

As part of the process for ownership of the Wesch-Oak building to be transferred to a new owner, the prospective buyer would complete a “plan of action” to the city, with the main portion of that plan to show how they plan to meet the minimum public safety requirements to ensure the building is structurally stable, including foundations, walls and a weather resistant roof.

Gregory however said that the two serious inquirers are being held up from completing their Plans of Action because the city is still awaiting a final determination from the Department of Transportation of how they define “stabilization” as it relates to the planned highway reconstruction though town, which will commence next spring. Currently, the city is requiring the stabilization to be completed by the successful bidder by April 1, 2021, to ensure it will be safe for the highway construction to begin.

Gregory said he hopes to have the stabilization to be defined by DOT in time to announce it at the next council meeting, scheduled for next week on Nov. 2.

In addition to stabilizing the building, the Plan Of Action required by prospective purchases includes a need for the individual or organization to provided evidence of financial liability insurance or bond that would cover any costs associated with losses incurred, including persons and neighboring structures, should the historic structure collapse during stabilization work.

The organization/individual must also apply for a building permit, which will include a summary of planned stabilization activities and a fixed time schedule to accomplish the work . It is recommended that the organization consult with a State of South Dakota Licensed Professional Engineer or Architect. This however will not be a requirement for commencement of work, due to the urgency of structural stabilization needed.

The City of Hot Springs agrees to waive the Building Permit fee, but expects that inspections of work will be performed by our Develop Coordinator to ensure responsible and timely stabilization work is being performed by the organization or its contractor.

Structural repairs to protect public safety must commence within 15 days of issuance of the building permit.