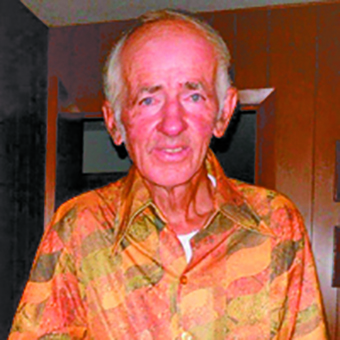 HOT SPRINGS – Roger Klein is known by most members of the community of Hot Springs as a collector of cans. But perhaps what he collected more than anything – whether he knew it or not – were friends.

Every town in America likely has their share of citizens and interesting characters who, over time, become part of the town’s identity. Klein, aka “The Can Man,” was certainly that to Hot Springs.

For more than 40 years, “The Can Man” could be seen almost daily pushing his bike while on the three-plus-mile trek from his home on Fall River Road, into town and back, making his rounds to pick up and collect aluminum cans from the road ditches and from people’s yards and dumpsters for recycling.

It was a habit that earned him great respect from the community and caused many residents to box or bag up their cans and place them out for him to pick up. And while his family was proud to support him in his endeavors, they also often cautioned him, and at one point, even persuaded him to suspend his activity for fear of something tragic happening while on his journey.

Sadly, last Monday, Sept. 28, those fears were realized when Klein was struck by a car and died as he was attempting to cross the four-lane highway, likely just going to get his mail, near the turnoff to his home. He was 82 years old.

Roger was born in 1938 and was the middle son of Edward and Gweneth Klein, who moved their family from Rosholt, S.D., to Igloo, near Edgemont, in 1942, after Edward got a job there during WW II. After the war, in 1945, the family – which also included oldest son James and youngest son Robert – moved into Hot Springs where the three boys attended school and helped out at their parent’s Standard Service Station from 1945 to 1951, which was located on the block where Lynn’s Dakota Mart is today.

Diagnosed with the learning disability dyslexia, Roger struggled in school and dropped out around his eighth grade year. His brother Robert, who still lives in Hot Springs with his wife Judy, said at that time there was not the assistance in schools for children with learning disabilities that there is today. Had there been, Robert said he would have been much more suited to live a life more on his own. But instead, Roger went to work for his parents right away, which included helping to run the El Rancho Motel, which the Klein’s built in 1950 and operated until 1975.

While spending much of his time with his parents, Roger became very close with his mom and would assist her with her hobby of collecting food labels, which she would turn in for refunding. This hobby would often bring them to the city’s landfill where they would find a larger concentration of boxes and cans with labels. Through that activity, Robert believes is when his brother began his 40-plus year job of collecting cans to turn in for recycling money.

Roger’s dad Edward passed away in 1984 at the age of 76, but his mom Gweneth lived to be 103 before passing away three years ago in 2017. Gweneth and Roger lived together in their home on Fall River Road until her death. She, along with his younger brother Robert, would assist Roger in his effort to collect cans.

“He felt it was his job, especially since people would save their cans for him,” Robert recently recalled.

Roger continued to live in he and his mom’s home but he also owned a storage shed on some property across the highway where he stored his cans until aluminum prices were their highest. Robert would assist him in routinely taking the cans to Ace Recycling in Rapid City, and would rent a U-haul to do so.

“We would sometimes take two loads per day, which were between one ton to one-and-a-half tons each,” Robert said, referring to times when they could get the most money for the cans. When at their peak – which was actually about six to seven years ago – they could get around .50 per pound, which earned up to $1,000 to $1,250 per load, minus the expense of gas and the U-haul rental.

When the prices were low, Roger would continue to store them and wait until prices went up again.

While he knows Roger donated some of the money he earned to local organizations, he did keep his share as well, because it wasn’t just a hobby to his brother, Robert said, it was his job and something he got up every morning to do – just like anyone else would do when going to their jobs.

“I once asked him if he had been watching anything good on television, and he replied, ‘I don’t have time to watch TV, I’m too busy!’” Robert recalled.

Someone with whom Roger got to be close with was Jacki Lockwood, who now owns and operates Taco John’s in Hot Springs and was one of Roger and Gweneth’s neighbors on Fall River Road. Jacki recently recalled how she would sometimes pick up and give Roger rides when the weather got bad or it was beginning to get dark, only to sometimes see him back out on the road again shortly after she cautioned him to stay home.

“We got to be close,” Jacki said, as she remembered when Gweneth and Roger would even come out to visit her when she lived in Pringle several years ago, before moving into a home close to theirs east of Hot Springs.

Jacki said she first got to know Roger in the early 1990s when she was working for the highway crew when they were redoing the sidewalks and street corners in downtown Hot Springs. Jacki was a traffic flagger and Roger would often walk through town collecting cans.

The two had a mutual hobby of collecting things. Even though she didn’t smoke, Jacki collected Marlboro Miles at the time, which were basically proofs of purchase located on the side of a pack of Marlboro cigarettes. They could be redeemed by using them to purchase items from a Marlboro catalog, including camping supplies, flashlights and other gadgets and items.

When Roger learned of Jacki’s hobby, he began to also be on the look out for thrown out Marlboro packs and would give them to her. And in turn, Jacki would round up all of the pop and beer cans produced by her fellow highway crew workers, during and after work.

“I still have a lot of the things I purchased from the catalog, thanks to the Marlboro Miles that Roger helped me to collect,” Jacki said.

“He was really a nice person and worried about things going on in his community, including politics and lots of other things,” Jacki said, as she recalled how he would often stop by her home and drop off his bike when he needed her husband Rick to fix it.

“He was also very giving and took the pop-tops off of every single can he collected and donated them to the Ronald McDonald House,” Jacki said.

Jacki said she and Roger would always exchange Christmas gifts each year, and he liked receiving additions to his Christmas Village, which went throughout his whole home and was kept up year-round due to its size.

Roger lived on his own in his house for about five years, Robert said, and was brought out Meals On Wheels for lunch but was on his own for breakfast and supper. He went through a lot of different bicycles over the 40-plus years that he pushed them to and from town. The many years of pushing his bike took its toll on his spine as he developed a very bent over posture because of it, Robert said.

Despite his posture and the slow manner in which he walked/shuffled, Robert said he doesn’t remember him ever being in the hospital or being sick, and was extremely healthy – likely due to the daily exercise he was getting.

His posture and age however likely did interfere with his ability to always know his surroundings which made him oftentimes oblivious to traffic, Robert said, so he relied heavily on the courtesy of locals for their assistance in yielding to him while on the road. Robert said they would often field calls from concerned citizens and from law enforcement about Roger’s habits, which prompted them to get him to stop for a while after they convinced him law enforcement had requested it – even though they actually hadn’t specifically said so.

But through a conversation with an officer one time, Roger learned that the the request did not come from law enforcement, so he was right back at it once again.

“Roger was Roger,” Robert said. “He loved what he was doing and he took it very seriously. He didn’t mean anyone any harm and appreciated all of the help anyone ever gave him. I’m sure he knew a lot more people in town than I ever did.”

Through all of the people he knew, and perhaps even more so, through the people who saw him but perhaps didn’t know him, he was undoubtedly a unique Hot Springs original.

On a recent trip home, Jacki Lockwood said her daughter Nicole saw “The Can Man” pushing his bike along his route on Fall River Road and stated how it was one of the sights she identified with being home and said, “Some things never change.”

Looking back at the moment now, however, and remembering Roger, Jacki said sadly, “But they do.”