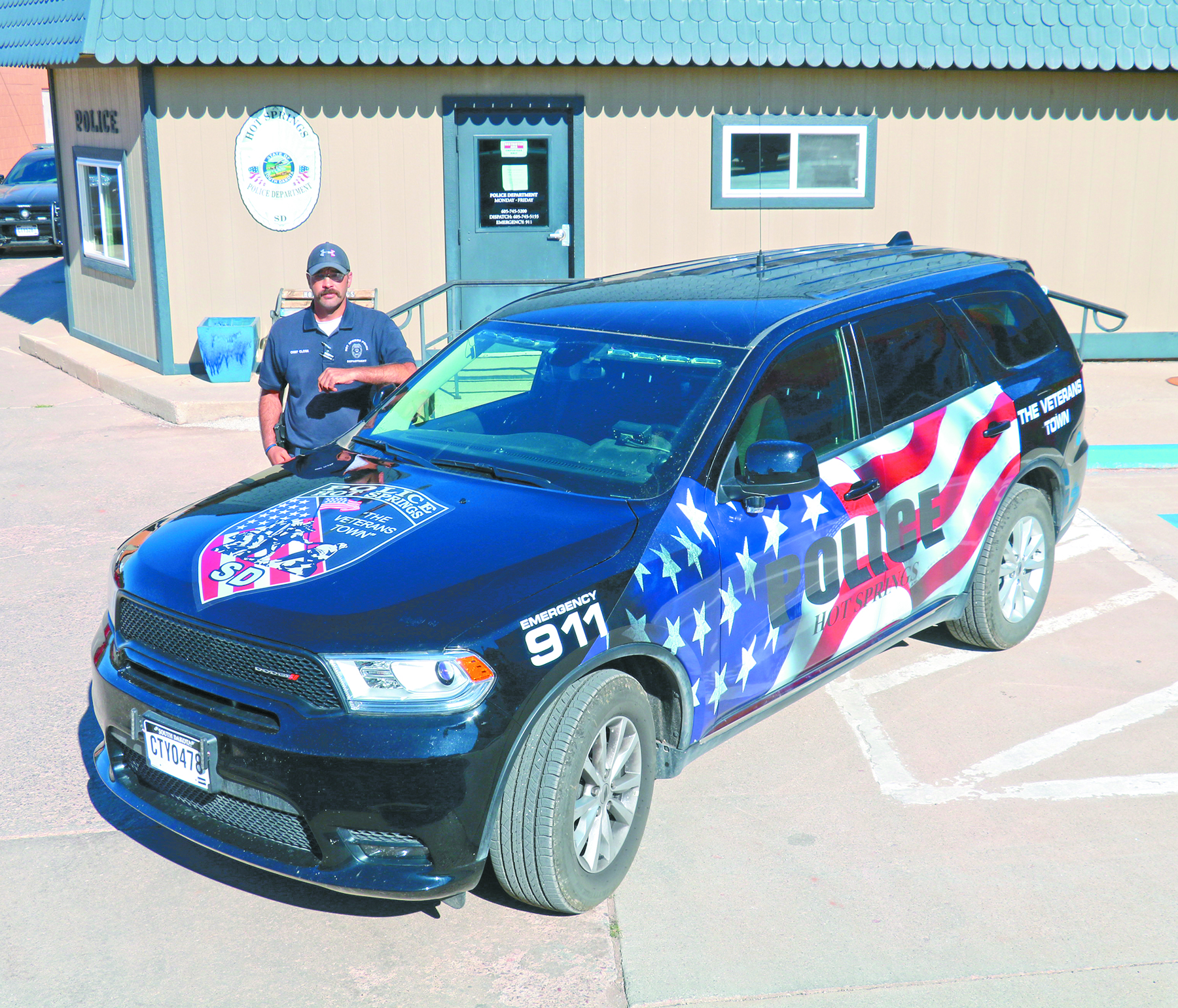 Hot Springs Police Chief Mike Close stands next to his department’s newest addition – a 2020 Dodge Durango featuring the debut of their new vehicle graphics. Within the next year, all of the HSPD’s vehicles will be outfitted with the same patriotic graphics which recognize The Veterans Town.

HOT SPRINGS –  The Hot Springs Police Department recently debuted some new graphics on one of their new vehicles, which will soon be the standard look for their units, according to Chief Mike Close.

The process to improve and standardize the graphics for all of the city’s law enforcement vehicle began about five months ago, Close said, which included community input. While most members of the community did not express a concern about the police vehicles – which are primarily all black with subdued police graphics – Close said there were some who felt the current color and graphic scheme made it hard for elderly and children to recognize them as police vehicles.

With those concerns in mind, Close said he set out to come up with a design that not only made the vehicles easily recognizable, but also honored the community as South Dakota’s official Veterans Town.

The department’s newest vehicle, which is a 2020 Dodge Durango, features an image on the hood that matches the Hot Springs PD’s patch on their uniforms as well as a the red, white and blue stars and stripes of the U.S. Flag on both sides. Close said he was driving the vehicle when they first received it but it will be the car of Officer Jennifer Winscot.

Close said there are currently seven officers on the force, but they will soon be losing Captain Bill Wainman to retirement. Of the department’s current fleet of eight vehicles, five more will also be getting outfitted with the new graphics within in the next year.

The graphics carried a price tag of $1,100 per vehicle, which is a higher price tag than what had been utilized previously by the department. But Close said he, along with and the city’s Public Safety Committee, felt the investment was worth the additional money to help portray a positive image to the community while honoring the town’s Veterans. They are being produced and installed by Curt Lout, who lives in Hot Springs and owns and operates Signs Now in Rapid City.

Close added that in the short time which they have been using the car, it has already created a buzz within the community, which has opened up positive interactions and conversations with citizens. He said he has also seen Facebook shares of photos of the vehicle being shared all across the country. Future plans for the vehicle include taking it up to the VA to show to Veterans and also having it in parades and other public appearances.