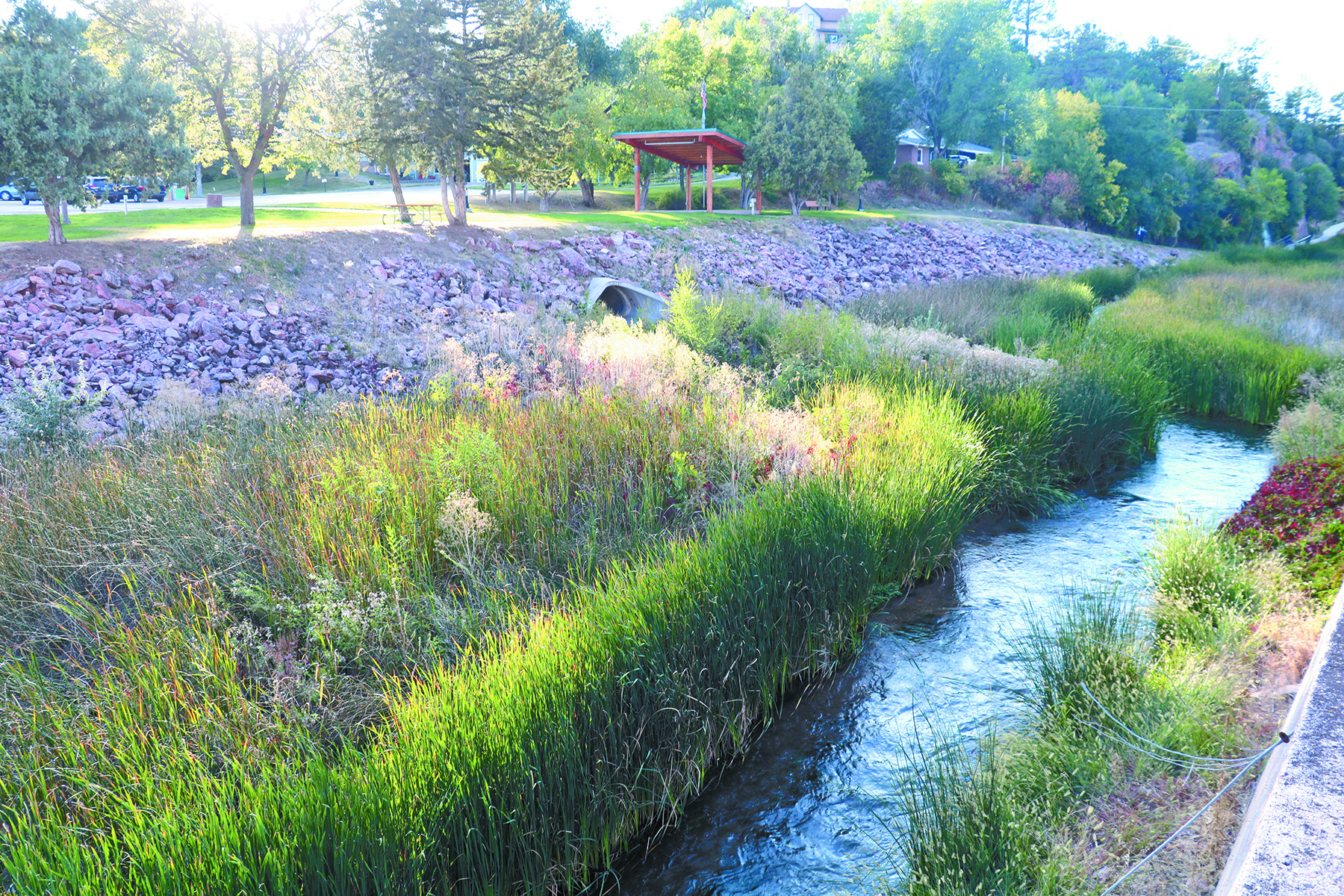 This area of Fall River near Centennial Park, where the large storm drain is located, is the site of the City of Hot Springs’ Phase 1 River Channel Restoration project. This phase includes constructing an access ramp while also removing cattails and silt and replacing it with layers of gravel and then a geo-grid material which will also hold topsoil.

HOT SPRINGS – At its Monday, Sept. 21 meeting, the Hot Springs City Council awarded a contract to perform Phase 1 of the River Channel Restoration project to American West Corporation, owned by Bob Quinn of Hill City, for $40,000. The project will include clean-up and mechanical removal of the cattails, the construction of an access ramp and the stabilization of a 50-feet x 100-feet area of the river channel.

Only one other bid was received for the project, which came from Samson Construction of Hot Springs for $63,000. Two other local contractors were contacted – Steve Simunek and Mark Wynia – but neither of them submitted bids.

According to the Request For Proposals, the structural bank restoration of the project, which comprises approximately 75 percent of the area, shall consist of 18 to 24 inches of cobble/rip rap stone subbase, which will be built up to approximately nine inches above the water level in “a slightly meandering flow channel that varies from 12’-16’ wide and will follow mostly the same path as before the cattail removal.”

Another layer of earthen material consisting of mostly six-inch and smaller cobbles with a considerable amount of gravel-sized material shall be placed on the subbase layer at six to nine inches thick. A top layer of nine-inch depth shall be placed that will incorporate a six-inch poly geogrid with roughly three inches of soil above the geogrid level. This layer will then be seeded with a specified grass mixture that is of the same species that grows naturally along Fall River near Brookside Park to the Sixth Street low water crossing bridge.

City Administrator John Gregory said the bulk of the bid is for the construction of the access ramp which will be a permanent feature that will allow not only future cleanup and development of the river, but also allow the public to access the river more easily once the work is completed. Gregory added that the area in which this first phase of the river restoration project will begin is near the large storm drain below Centennial Park, which is where about seven feet of silt has built up.

At the beginning of the meeting, during Communications from the Public, the city council heard a formal request from Kim Wittenburg to consider placing a plaque that dedicates the Hot Springs Tennis Courts at Butler Park in memory of her father Dr. Paul Wittenberg, who was a longtime business owner and resident of the area as well as an avid tennis player.

In Wittenberg’s three-page letter to the city council, she described all of her father’s contributions to the city over his more than 50 years of living here before his death earlier this year.

“He was on the tennis courts every night in the summer, before cancer and injuries slowed him down. Paul loved to play tennis more than any other sport,” Kim stated in her letter. “He helped fund the resurfacing of the tennis courts in the 1990’s and taught his children and friends how to play. He even ended up with two grandchildren who won multiple SD State Tennis Championships – both for doubles and singles.”

An idea suggested to Kim earlier this year was to purchase a bench and place it by the tennis courts in memory of her father, which is a gesture often performed by family members following their loved-ones death.

“Hot Springs is a special town, and it’s special in part because of its residents,” Kim stated. “Many residents have contributed to Hot Springs over the years, but there are things that make Paul Wittenberg stand out, and because of that, I feels that a bench is not proportionate to his impact on the community, and I think it would be a wonderful tribute to dedicate our town’s tennis courts to him.”

Parks Committee Chair Wes Grimes said he would support adding her request as an agenda item for an upcoming council meeting.

In other business, the city council:

• Heard updates from Chamber of Commerce Executive Director Olivia Mears and Emergency Manager Frank Maynard. Mears spoke of how COVID had forced the cancelation of a number of summer events this year, while also impacting staff through furloughs and the event loss of one staff member after they found another job. Maynard spoke of  both the Local Emergency Operation Plan (LEOP) and the Pre Disaster Mitigation Plan (PDMP)

• Mayor Nelson also gave a golf course report and stated that the State Class “A” Golf Tournament will be held Monday and Tuesday, Oct. 5-6, with the course also closed to the public on Sunday, Oct. 4. He said the city would be reimbursed $1,800 from the South Dakota High School Activities Association for use of the course for the state tournament.

• Heard an update from City Administrator John Gregory who has been working on numerous projects including the Suspended Sidewalk details and the Jennings Bridge project, which is on schedule to be completed in November.