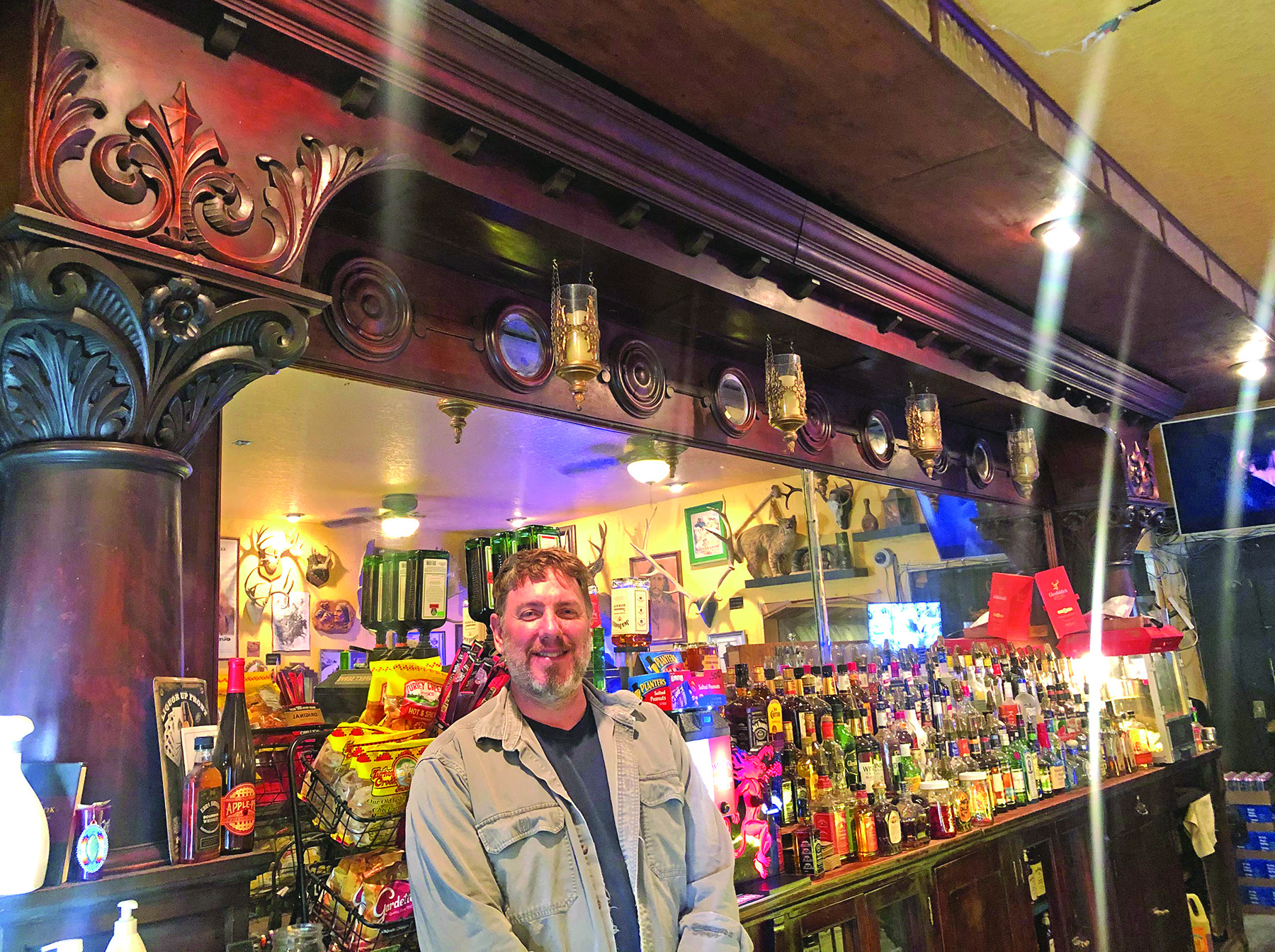 Eric “Doc” Forney, owner of the Black Hills Saloon Company, stands before his mid 1800s solid mahogany back bar. The mid 1800s bar sconces positioned above the mirror were originally fueled by oil lamps, now modified for modern use.

OELRICHS – Hidden off the beaten path in the center of the town of Oelrichs, South Dakota, is a historical gem and thriving business; the Black Hills Saloon Company.

Built in 1885 the building has been home to the local bank, Methodist Church, General Store, Odd Fellows Hall, brothel, land office and more as the town grew and became a bustling center of commerce.

At one point the town was rumored to be considered for the county seat, yet Hot Springs received that honor in 1883.

The historic building has been operating as a saloon since the 1940s with multiple owners and names such as: Klines, Penors, Shortys, King Louie’s and the Horse Head.

Rumor has it that when Shorty and Eileen ran Shorty’s, 1950s to 1974, they had an argument one night and Eileen shot at Shorty. The bullet went through the building wall into a parked car. When she was asked why she shot him she was reported to have said, “I wouldn’t have shot him if I didn’t love the son of a …..”. Soon after, Shorty purportedly took to wearing a hard hat while he drank at his own saloon as Eileen had once used an iron skillet to knock him on his head.

It was at this time that an antique collector from Denver estimated the back bar to have been built in the 1860s, most likely in St Louis.

Hidden within the smoky metal glaze of the old 4 foot by 8 foot mirrors lay a logo of a half sunbeam and a date of November 14, 1800. It is unknown if the logo pays homage to King Louis XIV and his sun king nickname or even when or where the mirror originated.

The front bar counter is solid mahogany with a brass foot rail purchased by Apa for $200.00 from Hot Springs old Northern Bar when it closed.

In 1885 the complete mahogany bar was located in Deadwood. It took several men with four mule team wagons many weeks to haul the massive piece to Chadron, Nebraska. It remained in Chadron until the 1940s when it was moved again to its home in Oelrichs.

In 2010 after serving in the United States Air Force for 20 years as a C130 crew Chief, Eric “Doc” Forney yearned to come home.

Upon returning home he worked at his parents’ gas station/convenience store in Oelrichs for a few years but had a vision to try to bring the old saloon back to life; reliving its glory days.

By fall that same year he opened the doors and has not looked back once.

“Since I was a kid I just loved the Black Hills, hence the name; Black Hills Saloon Company. It never occurred to me when I bought the saloon that I had never made a drink before in my life but you don’t yell whoa in the middle of a horse race and it was my name on the line I had to make it work.”

The saloon reflects his love of his home state and history with ranching tack displayed on the walls, plains and Native American paintings, western posters and the occasional set of antlers. It also offers an extensive alcohol selection with licenses to sell on and off site so folks can get a six pack to go or sit a spell, there are pool tables and state lottery machines as well as some larger tables for groups or bar seating at the historical bar.

“This saloon is special because of the history and the people who come to visit,” said Forney. “We are off the beaten path yet we get the most amazing people visiting us.”