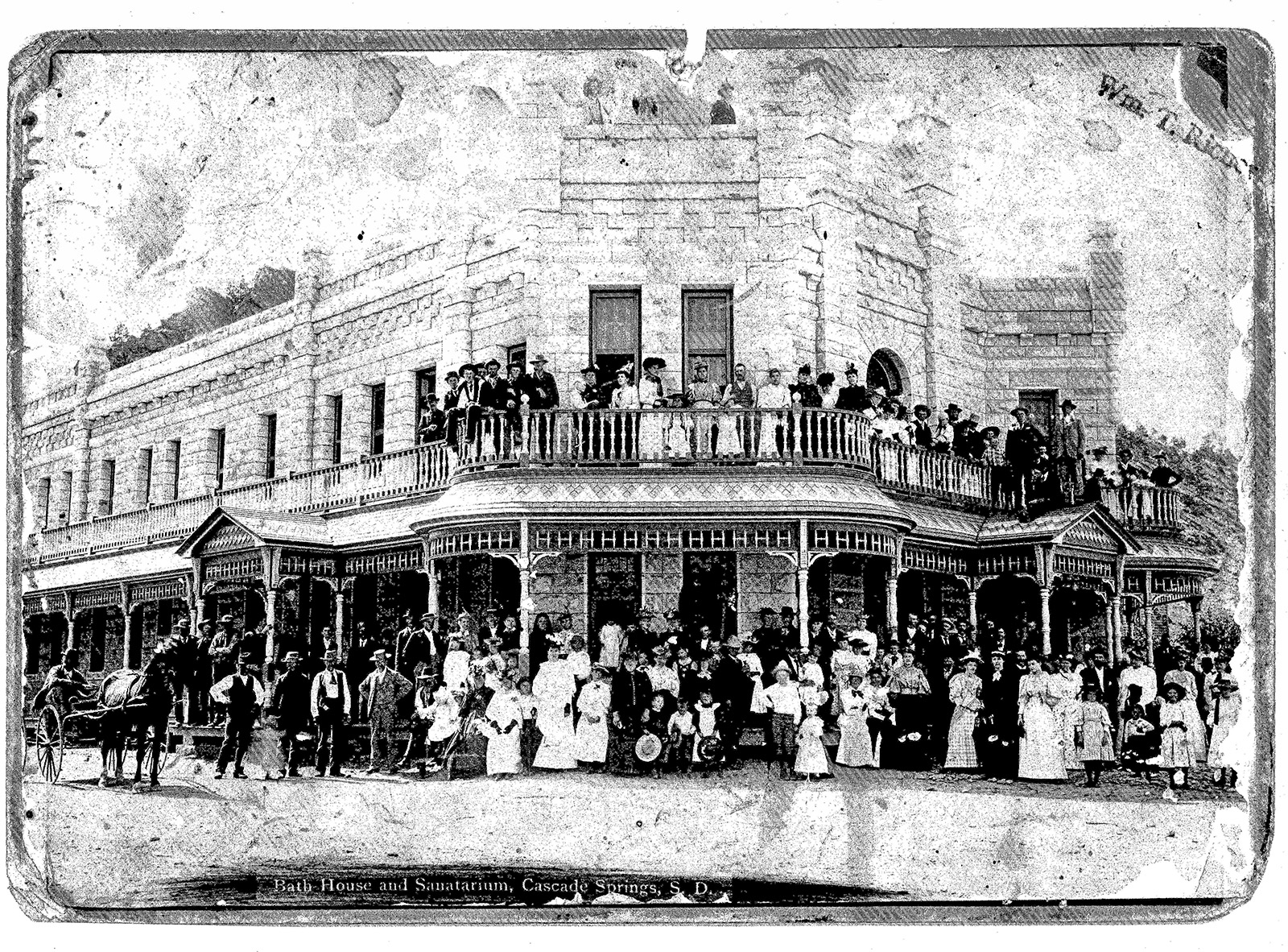 This photograph shows a well-dressed crowd at the grand opening of the Cascade Springs Sanitarium and Bath House sometime in the early 1890s.

HOT SPRINGS --- After nearly 25 years, the Archaeological Research Center of Rapid City (a program of the South Dakota State Historical Society) in conjunction with the South Dakota Department of Transportation released their official report detailing the archaeological work done at Cascade Springs in the 1990s.

The report, entitled “The Water Cure: Archaeological Investigations at the Sanitarium and Bath House, Cascade Springs, South Dakota,” provides historical background information of the area, the extent of the excavation, and an analysis of the artifacts recovered at the site. The completed 194-page report, which is in book form with over 100 pictures and maps, was released last week and is dedicated to Helen Magee, former Hot Springs resident and local historian who “generously shared her knowledge and collection with staff at the Archaeological Center.”

Cascade Springs, located approximately eight miles south of Hot Springs on Highway 71, was once a community bustling with activity. In 1890, an organization named the Carlsbad Spring Company bought extensive tracts of land in and around Cascade Springs in an effort to create a warm springs-based health resort, much like Fred Evans did in Hot Springs with the Plunge Bath (now Evans Plunge).

In the early 1890s, the Cascade Springs Sanitarium and Bath House was constructed and promoted as a place to cure various ailments. This building was the “sparkling gem” of the community. By 1891 over 200 people lived in Cascade Springs and the town had over 50 buildings, including a bank, barbershop, general store, saloon, drug store, and a school.

In 1882, Cascade Springs was granted a post office with Frank T. Allabaugh serving as the first postmaster. A regular stagecoach ran between Cascade Springs and Hot Springs, and the Carlsbad Spring Company later made plans to build a trolley line between the two towns, but this line was apparently never built. The boosters of Cascade Springs were disappointed when the railroad chose a different route through the southwestern portion of the Black Hills, one that bypassed Cascade Springs and instead ran through Edgemont.

Because of the railroad bypass, economic troubles, and various flooding events, the town of Cascade Springs did not last. The Carlsbad Springs Company dissolved in 1893 and in 1908, the Sanitarium and Bath House was sold and the building was subsequently torn down. The stone of the bath house was transported to Hot Springs and used in the construction of the Our Lady of the Lourdes Hospital.

In 1990, the South Dakota Department of Transportation submitted their proposal to reconstruct Highway 71 through the former town of Cascade Springs, and contacted the Archaeological Research Center to lead the archaeological survey of the former site, particularly where the bath house once stood. The center started its survey in 1993, conducted subsurface tests in 1995, and began excavations in 1996. During the excavations, thousands of artifacts were discovered and transported to Rapid City for analysis by the center and the State Archaeologist.

The report is available for the public to view in the Helen Magee Heritage Room at the Hot Springs Public Library. Copies are also available for purchase from the Archaeological Research Center. Contact Michelle Prichard at 605-394-1936 for more information.